[Note from Liz: Some of our bloggers are still filing their writeups from HVRW. I’ll be posting them as they come, even though Restaurant Week ended before Thanksgiving!]

Briana Costa, guest blogger, here, very excited to tell you about the second restaurant I was able to enjoy during this Hudson Valley Restaurant Week!

After Hurricane Sandy hit, I wasn’t sure if it was going to be possible for me to actually visit Half Moon, since it had sustained some damage by the storm.  Luckily, they were able to open their doors and I yet again grabbed my foodie mother, Patrice Costa, to slip in one last HVRW meal before the week was over! 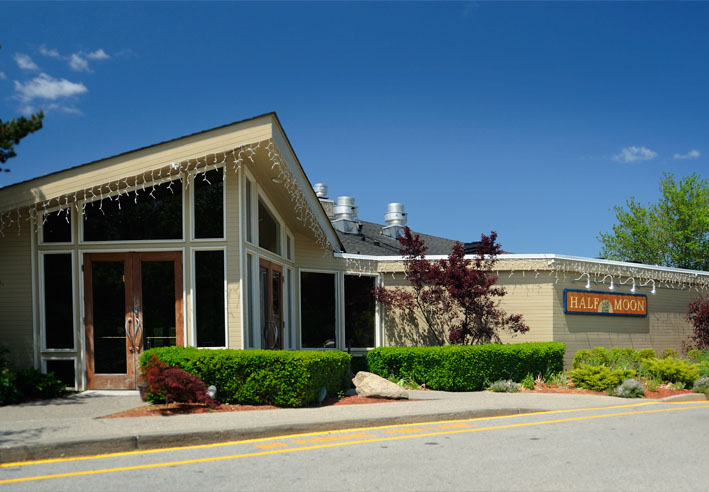 (Photo taken from Half Moon’s website – it was too dark for my poor iPhone to get a good picture!)

A quick disclaimer – since my mother happens to be working at Harvest on Hudson (a sister restaurant to Half Moon) it was deemed biased to use any of her (very positive) comments  on this meal.  As such, I was forced to try every single item that came to our table to be sure that I could write about each option.  It was tough having to try all the delicious food, but I somehow powered through.

The restaurant was quiet when we walked in, with only a few people already seated or enjoying the fire pit by the bar.  Yes, I said fire pit.  Now that the weather has turned slightly chilly, I can only imagine how amazing having a drink by the fire must feel.  We were seated in a corner by one of the many walls of windows at Half Moon.  You could see the deck, obviously closed for winter, and the Hudson River – beautiful.

While we perused our menu, we were brought lightly toasted Italian bread and Parmesan cheese to go with the olive oil already conveniently available at our table. 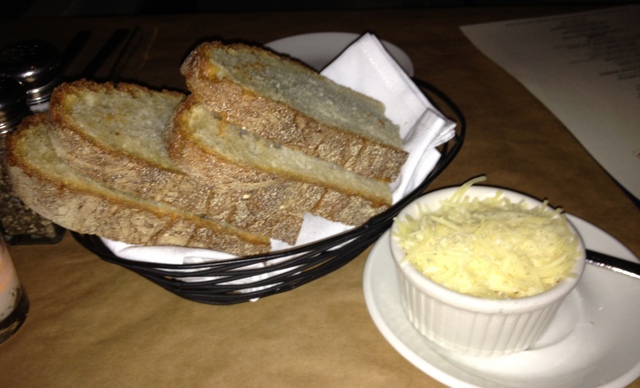 After a short taste test of the two bottles, we realized that one was spicy (I will admit this is the one item on the table I allowed my mother to try without me) and one was smooth.  Neither myself nor my mom really needed the cheese considering how awesome the smooth olive oil was with just the bread.

For our first course, I chose the Fried Ricotta Cheese Ravioli with San Marzano Tomatos and Basil Pesto. 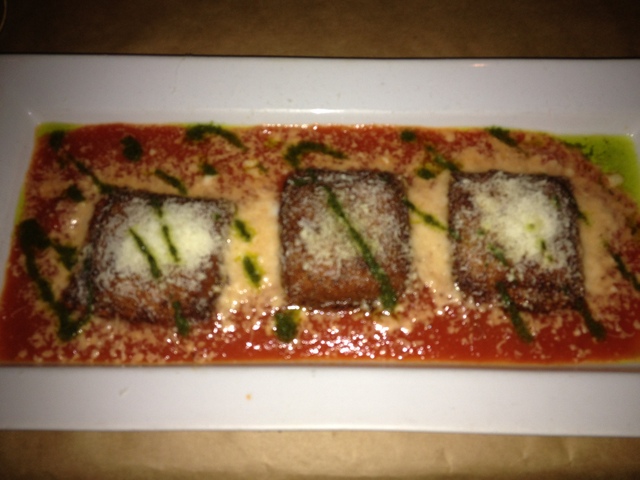 The raviolis were crunchy while having the inside still soft.  The pesto and tomato sauce made for a very pretty presentation, and also paired very nicely with the raviolis.  I had a very hard time figuring out exactly what the taste of them reminded me of – I was stuck between an eggplant parm without the eggplant and a calzone.  Whatever it was, it was really good.

My mom chose to start with the Cream of Cauliflower with Bacon Wrapped Bay Scallops. 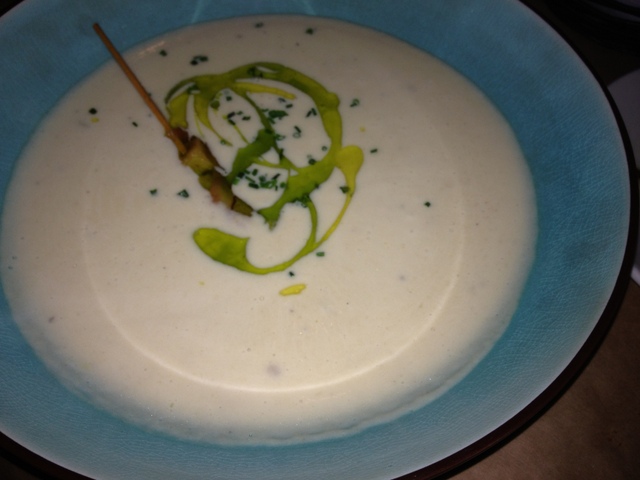 This was the absolute perfect dish to order on a cold, almost winter night.  The entire dish just made you feel warm and cozy from the inside out.  The cauliflower was perfectly pureed into a smooth and creamy soup.  The tiny bay scallops were pierced by a skewer with bacon wrapped around them, which added another element to the beautiful presentation.  The bay scallops, not always my favorite type of scallop, added a nice saltiness and the bacon added a bit of a crunch to the otherwise soft dish.

The second course was a bit difficult for us to choose.  I had really wanted to try the Chipotle Prince Edward Island Mussels with Spaghetti and Fresh Tomato but not being a huge spice fan I was a bit frightened of the word “chipotle”.  When asked about the dish, our server informed us that it was quite spicy but noticing the look of disappointment on my face, he quickly told me that they could try to lower the spice level if I’d want.  I put my trust in the kitchen and decided to try the dish anyway. 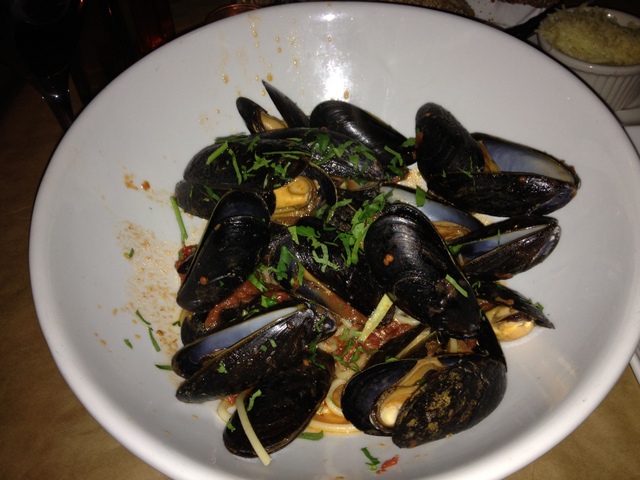 The minute the dish of mussels was put in front of me I could smell the chipotle.  The first tentative bite (ready to chug the glass of water in front of me if necessary) gave way to a spiciness that I would describe as just dancing on my tongue instead of obliterating my senses.  It was still a bit too spicy for my mom, but I really found myself enjoying the bite and slight smokiness of the sauce.  There were so many mussels that I barely got to enjoy the spaghetti at the bottom of the plate, soaking in the chipotle, tomato sauce. 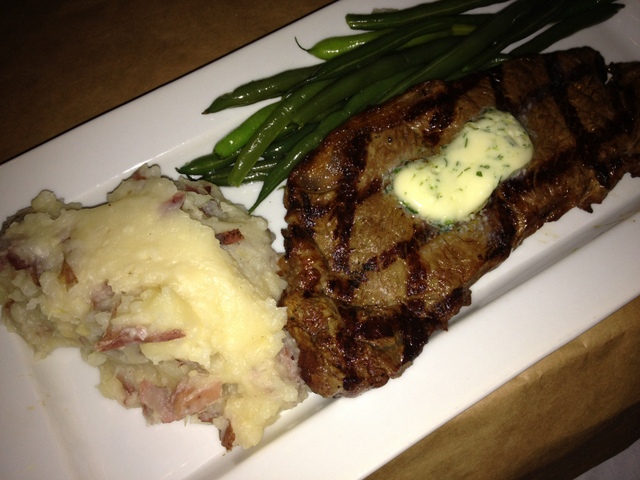 The steak was a perfectly cooked medium rare, was juicy and had well defined grill marks.  The smashed potatoes were red potatoes and were creamy with a slight crunch from the potato skins.  The green beans were crisp and tender.  All in all, it was a great steak dish with all the components being amazing both on their own and when paired together.

As usual, I was somehow talked into taking both leftover entrees home and was able to have them as an appetizer and dinner the next night.  Delicious!

Dessert was an easy choice for both of us – the Coconut Risotto Pudding with Caramelized Pineapple for me and the Flourless Chocolate Cake with Raspberry Sorbet for my mom. 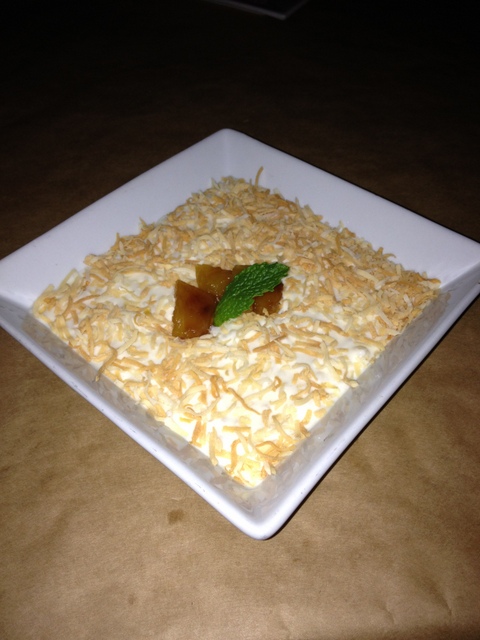 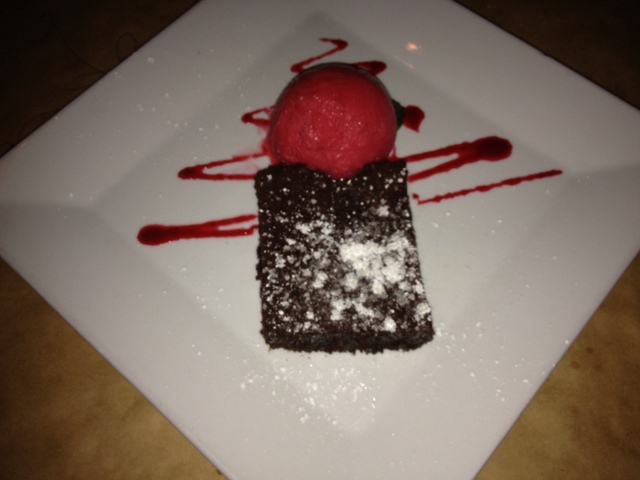 The risotto pudding came in a shallow dish so that it was spread out with a top layer of toasted coconut shavings.  The risotto was soft, the pudding creamy, the coconut crunchy and the caramelized pineapple gave it some sweetness.  Absolute perfection.

From start to finish, Half Moon provided amazing food.  We definitely enjoyed ourselves and I personally cannot wait to come back and enjoy a drink and perhaps that coconut risotto pudding by the fire pit in the bar.

The following picture pretty much sums up my feelings for Half Moon after this dinner (and Harvest on Hudson from previous dinners).  They really shouldn’t give you paper table cloths if they don’t want you to start coloring eventually… 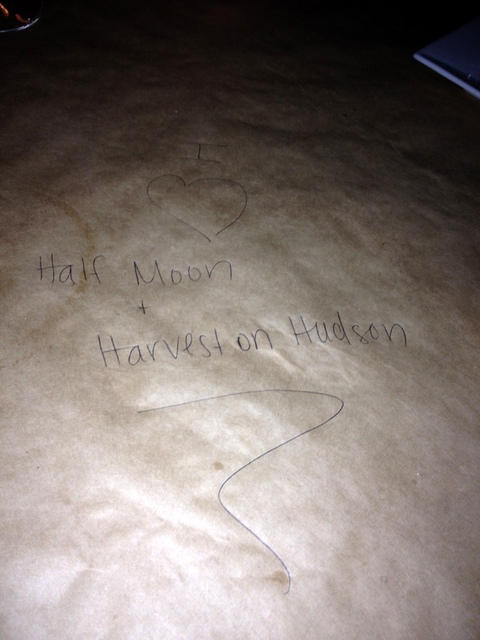 The 411 on Half Moon (and Harvest on Hudson)