People are reading
You are at:Home»Drinks»Meet Our New Wine Expert: Jeffrey Wooddy of Rochambeau Wines & Liquors in Dobbs Ferry 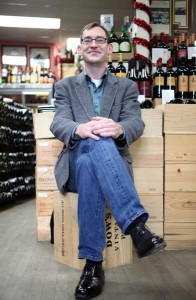 He’s the 6-foot-5 manager behind the counter who can find a perfect wine to pair with your dinner in five seconds flat, no matter whether you’re serving roast suckling pig or pigs in a blanket.

“Our job is to prepare ourselves with the best wines at various prices that we can get our hands on — and then be ready when a customer comes in,” he says. “We’re librarians and these are our stacks. And we need to be ready to say, ‘I think you should meet this wine. This will be perfect with what you’re having.’”

Wooddy — along with the shop’s owners, Dieter Kannapin and his son, Derek Kannapin — tastes between 6,000 and 7,000 wines to select the 1,700 they offer for sale at any one time, so Wooddy can tell you, for example, that Beringer Reserve Chardonnay has gone back to its original, no-oak style, or recount the time he lunched with Mount Eden Vineyards winemaker Jeffrey Patterson on his front porch, tasting every vintage of his wines going back to the 1990s.

“This is what Rochambeau does,” says Wooddy. “We don’t wait for the wine world to come to us, we go and seek it out. And that’s how we know everything that’s here.”

It’s this breadth of experience that led us to select Wooddy to be our wine expert-in-residence for the next three months. For the next 12 Wednesdays in Life&Style, he’ll choose our LoHud Wine of the Week, and include tasting notes and suggestions for pairings. (His first recommendation, a Bordeaux — 2009 Chateau L’Argentyre — is at the bottom of the page.) At the end of the 12 weeks, we’ll review our Mixed Case, and recap the choices assembled by Wooddy. Then we’ll introduce a new expert.

We’ll also turn to him for suggestions for pairing wines with meals, including for the upcoming holidays. And when we do, it’s likely he’ll go for something unexpected and delicious, which is how he describes his “best $20 bottle in the shop,” a 2009 Cartuxa Tinto Colheita, a red from Portugal that Rochambeau has carried every year since its 1993 vintage.

But getting Wooddy to part with any of his wines can sometimes be amusing.

“I think I’ve developed a kind of crazy reputation with my customers,” he says, deadpan. “One of the things that I think amuses people about the way I sell wine is that I’m very tactile. When somebody asks me for a food and wine selection, I’m known for actually carrying the bottle of wine around the store with me, occasionally stroking it as if I don’t want to let it go, but wanting to give it a good home.”

So imagine what his reaction will be when someone decides to buy the oldest wine in the store (a 1929 Domaine Bchelet Maury from the French Roussillon that sells for $149.99) or the more expensive (a $1,500 Screaming Eagle Napa Valley Cabernet)? We shudder to think!

Another wine that will be hard to let go is the 6-liter 2005 Shafer “Hillside Select” Cabernet which, at $2,200 a bottle, is the most expensive in the shop.

Large-format bottles are a specialty of Rochambeau, so Wooddy isn’t surprised when customers come looking for them.

“We think it’s fun and it’s a way we can distance ourselves from the competition,” says Wooddy. “We have as many large formats of Chateauneuf du Pape as probably some stores have regular bottles.”

Another draw? The specialty spirits. Cocktail aficionados from all over the region travel to Rochambeau to pick up their ingredients. There are 14 absinthes alone! Plus, there are nine varieties of Italian Amaro, bottles such as Creme de Violette (an ingredient in the Aviation), aperitifs with quinine (a bark) and gentian (a flower). And there’s an Evan Williams single barrel bourbon, bottled especially for Rochambeau. (Bottles costs $29.99 each and are sitting on top of the actual barrel they aged in near the front of the store.)

Maybe it’s fitting that old-fashioned spirits are among Rochambeau’s specialties. It originally opened in 1933, making it one of the New York’s oldest post-Prohibition wine shops. (The liquor license has one of the lowest numbers in the state.) Dieter Kannapin took over in 1977, and during the 1980s and 1990s, Rochambeau was among the top sellers of Bordeaux futures in the U.S.

Today, there is also a huge selection of fine scotches, whiskeys and bourbons, and, says Wooddy, “probably more specialty gin than maybe anyone outside of New York City.”

And while we’re on the topic of the metro area, we love that Rochambeau champions local and regional wines. You’ll find bottles from Connecticut, the Hamptons and upstate New York alongside the wide selection of wines from the Loire Valley, Piemonte, Tuscany, Bordeaux, Burgundy, Spain, California, and the Pacific Northwest.

“People are surprised that we know all these wines,” says Wooddy. “But we should — it’s our job. That’s why you come to us.”