I was lured into executive chef Ethan Kostbar’s kitchen with the promise of snippets of Gordon Ramsayesque behavior.  And really, who doesn’t love a bad boy chef?  Sadly, there were no screams, tantrums, or tears in Moderne Barn’s kitchen.  What chef Kostbar did deliver was an organized and calm service with him in the forefront keeping his team on point with dish after beautiful dish being turned out quickly and efficiently. 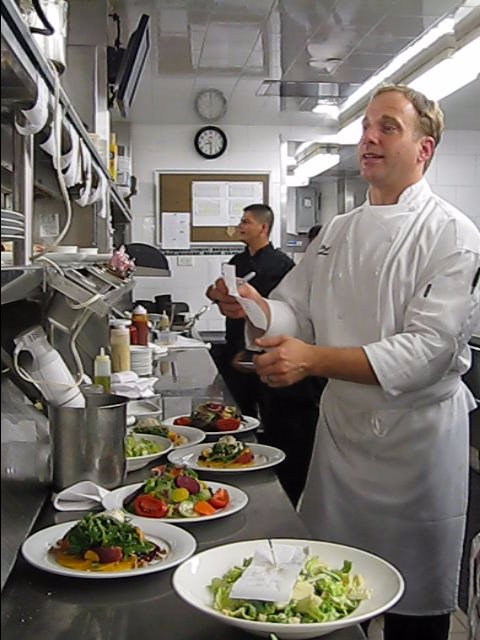 chef Kostbar expediting in the middle of service

From dishwashers to sous chefs, prep cooks to line cooks, servers to busboys, this team worked together seamlessly to complete a busy Friday night service.  There was none of the routine chopping, peeling or dicing for me during my day behind the kitchen door.  My experience at Moderne Barn was all about just an ordinary day in the life of an executive chef.

I arrive at the restaurant a little early to give myself an opportunity to take some pictures of the stunning dining room and look over the menu. 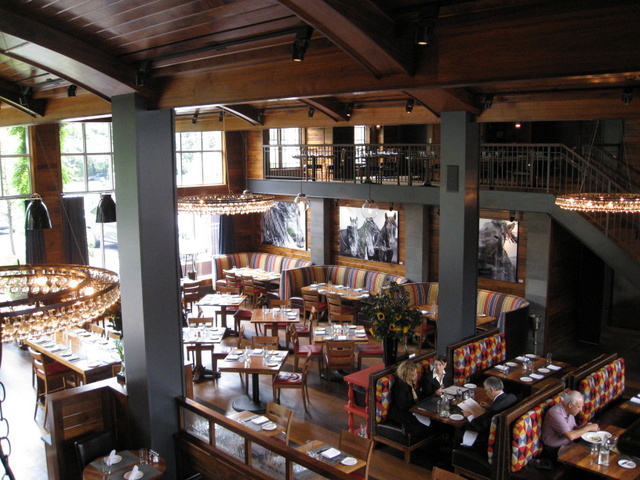 view of the dining room from the second floor mezzanine

Chef Kostbar greeted me and then gave me a tour (including the rooftop garden!), introduced me to his staff, and took time to chat with me (lots more details on all that in my previous Behind the Kitchen Door post).  Most impressive was how many staff members were introduced with the comment “here from the beginning”.   The loyalty and continuity of the staff translates into a tight-knit family that works together each day with the same goals to create an unforgettable dining experience for their customers.

Front of house servers and managers gather upstairs in the private dining room to discuss the menu and specials with Ethan. 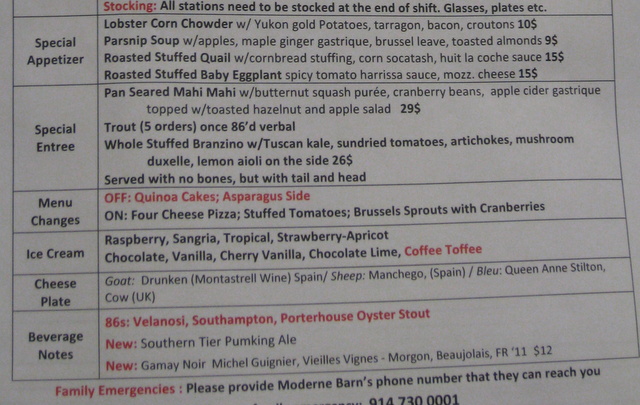 Servers are expected to know the menu inside and out and should be ready to be quizzed during the their daily staff meeting before service (Q: What is Branzino? A: Mediterrean sea bass). 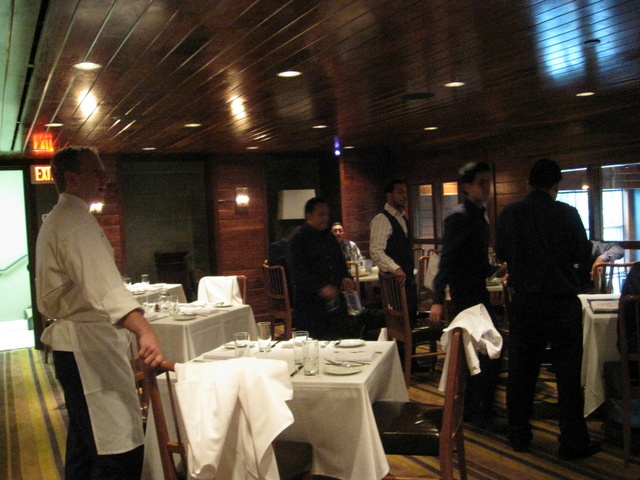 During service, the dining room manager is the liaison between the front and back of house (kitchen) and is in constant communication with chef Kostbar relaying both positive and negative issues.

Line cooks make sure their stations are stocked and ready to go.  Managing upwards of 400 covers (restaurantspeak for customers) during a weekend night’s service takes a top-notch professional (and organized) staff.   The line is sectioned into stations that each cook is responsible for with a separate area for pizza/salads and desserts.  Here’s how the stations stack up going down the line: 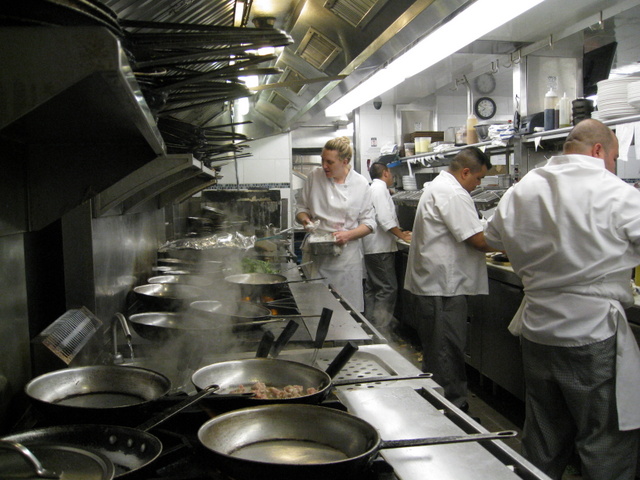 a view down the line

Sous chef Daniel Yacashin oversees garde manger (cold station and pizza) and also the catering kitchen.  The sous chef (pronounced sue chef and literally means under chef in French ) is the right (and left) hand of the executive chef.  Simply put, they are the second in command.  In Moderne Barn’s kitchen, there are actually three sous chefs who can cover for each other, take over at any of the stations on the line and, if necessary, step into the role of executive chef.  In addition to Daniel at the cold station, Rose Nappi oversees the prep kitchen and butchering, and Danny Namzoff is in charge of lunch service and events.

Back to garde manger, this station turns out crispy crust pizza from the double Baker’s Pride pizza oven and is where all the fresh salads are created (including house made mozzarella). 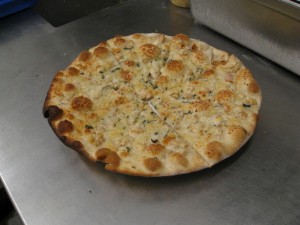 white clam pizza hot out of the oven! 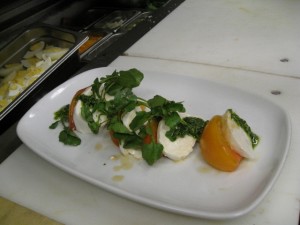 Just a few steps around the corner is the pastry station in the very capable hands of Amanda Smith.  She started out as a hostess but is now following some sweet endeavors in culinary school. 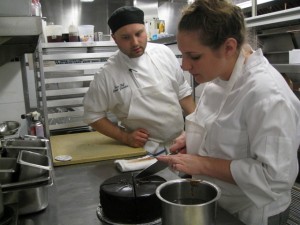 Servers are starting to put in their orders and the tickets begin to trickle in. First up is an order from the bar for Lobster Corn Chowder, Bourbon Wings, and Fish Tacos. 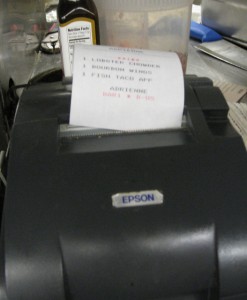 first tickets of the evening

Ten minutes later, the dishes are ready for the runners to scoop up. 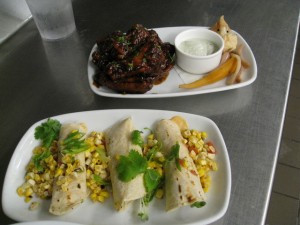 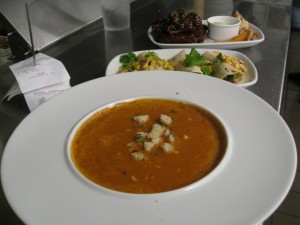 Just as the name implies, the runners get the food out fast from the kitchen to your table.  But it’s so much more than that as they are constantly watching the pace of the diners to know when they are finished with their courses, making sure they have all the plates on a ticket, and knowing exactly who gets what (each seat at the table has a numbered position).

The activity is increasing in the kitchen and a few more tickets are up on the holder rack.  There’s a specific process in place to control the flow of the orders.  Tickets are printed on the line, at specific stations (like salads or desserts), and at the pass where Ethan is expediting.  He takes the ticket and calls out “pickup” followed by the table number and the items on the order, basically giving the line a heads up on the entire order.  There’s a lot of information squeezed into that little piece of paper like the table number, time of order, server name, menu items with any changes of additions or subtractions of ingredients (usually in red!), and if there is a VIP in the house. 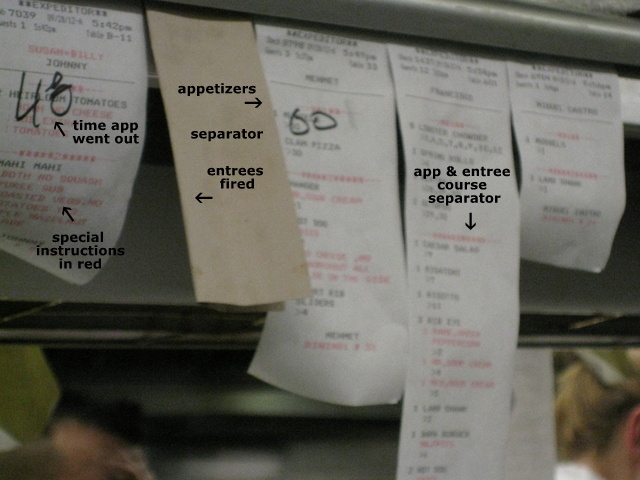 tickets on the rack

The exact placement of the tickets on the holder tells the story of the flow.  The tickets to the right (separated by that blank sheet) are appetizers that have either gone out or are being worked on.  If the apps have been completed, Ethan makes a notation on the ticket of the minute (for example, if a ticket has “48” on it, the apps went out at 48 minutes after the hour).  This is to keep track of the span of time between app and entree at a table (the goal is not to exceed 30 minutes to keep the plates moving).

This is the crunch; the optimum dining time when table after table is seated and, subsequently, order after order floods into the kitchen.  Ethan is now constantly firing tickets, which means he gives the line cooks the go ahead to begin preparing the entrees (those tables should be just finishing up their appetizers).   He starts by calling out the table number and each dish on the ticket which needs attention.  He will make it clear that there are multiples of a dish needed by calling out “all day” after the amount (“I need 5 fish tacos ALL DAY” means there are 5 orders of fish tacos on the tickets in front of him).  He waits for the stations to confirm they are working on the items.  It takes a great deal of communication, focus, and multitasking to keep everything straight.  At this point, he moves the ticket to the grouping on the left side of the holder in front of him indicating that it has been fired.

The flurry of activity that ensues on the line when tickets are fired can easily be described as organized chaos with a dash of cacophony (I’ve always wanted to use that word in a sentence, and I couldn’t have found a better situation!).

When the entrees are ready, they move from the pass to the counter where the plates are wiped down by the runners and Ethan inspects the quality of each dish.   The runners double check the tickets and take the dishes to the dining room.

Once all the dishes have left the kitchen, Ethan moves the completed ticket to the spike (the scary looking vehicle for impaled tickets). 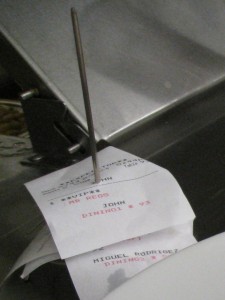 The line is still pushing out dishes, with a few smiles and laughs thrown in, as the rush begins to come to an end.  Line cook Anthony Rinaldi, who was hustling to keep up on a new station, gets a little teasing mixed with kudos from chef Kostbar.

Working the line is definitely a pressure cooker (pun intended), but chef Kostbar and his staff make it seem almost easy.  Much thanks to chef Kostbar and his entire staff for giving me a glimpse into their world behind the kitchen door.  Next time, though, could you conjure up just one little tantrum?

With all those amazing dishes passing right by me all night, it would be extremely selfish not to share some foodie eye candy; but be warned, do not view the following pics if hungry. 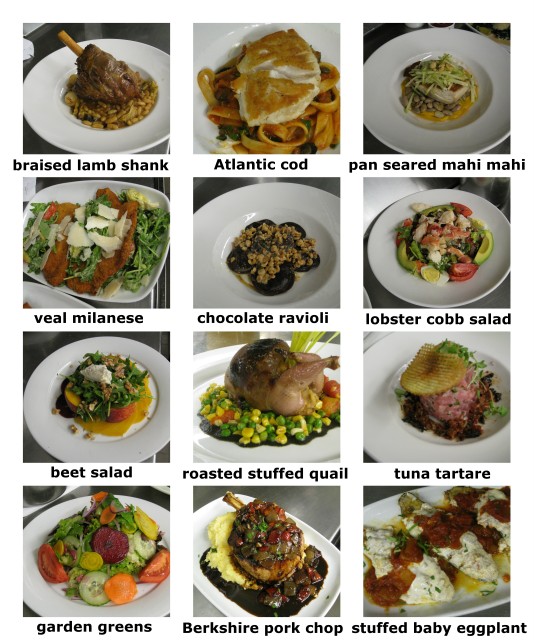 Patrice Costa is a passionate foodie who is on a personal culinary mission to learn it all from local chefs.  She looks forward to sharing her experiences as she goes behind the kitchen door in some of her favorite restaurant kitchens.  When not on blogging assignments, she can be found happily working in the kitchen of Harvest on Hudson.