People are reading
You are at:Home»Food Links We Love»Notes From the Captain Lawrence Tasting Room, Vol. 43

You Say You Want a Resolution

We are on the cusp of the new year, when the media guilts us into embarking on resolutions designed to make us healthier, wealthier and maybe even happier–at least until we shamefully give them up a few weeks, or perhaps months, later. 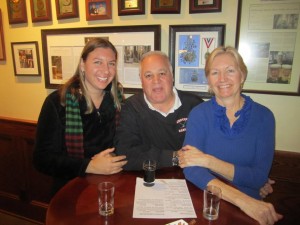 Fittingly, Anne and Ralph Defino of Briarcliff, along with their Manhattan-based daughter Lauren, have popped into the brewery fresh off a viewing of Guilt Trip. The film gets three resounding sets of downward thumbs from the Defino clan. “The commercials were funny,” is about the kindest thing Anne can say about the Streisand-Rogen would-be comedy.

Their feedback on Captain Lawrence beer is considerably brighter. Ralph is enjoying the Six N’ Change Black IPA, Anne the Freshchester Pale Ale, and Lauren the Liquid Gold. Anne and Ralph have filled up a growler of the Black IPA, a small-batch beer brewed by Scott Vaccaro, to liven up a New Year’s Eve party up in Danbury. Lauren will be stocking up on Liquid Gold later on in the city, for a party out in Brooklyn.

“They sell Captain Lawrence at my [local Harlem]Fine Fare,” Lauren says. “That makes me so happy.”

Asked about their New Year’s resolutions, Anne’s eyes shoot a dagger toward hubby Ralph. “I’m hoping someone loses some weight,” she says.

Ralph has retired from coaching every sport under the sun at Croton-Harmon High, and concedes he’s got to spend a little more time at the gym–and a little less time in the sauna when he does go.

Right on cue, a fat batch of Village Dog French fries is set on the table. Awkwardness shares the air with the smell of grease. Ralph shrugs, smiles, and helps himself. It’s not yet 2013, he says without saying. 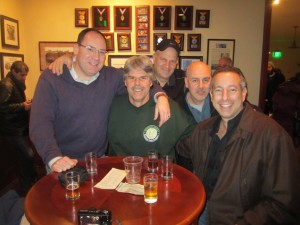 A few tables away is the so-called Brew Crew—a gang of old neighborhood pals who meet at Captain Lawrence each year between Christmas and New Year’s. All went to high school together, and most of them date back to kindergarten at Warburg Elementary in Hartsdale—Class of ’68.

“We enjoy the diversity of beers, and the community atmosphere here,” says Roberto LeBron, who made the trip from Berkeley Heights, NJ.

The barbs fly freely across the table as if the Brew Crew guys are schoolboys once again. The resolutions flow as well, ranging from the familiar (“Exercise again”, “Get back onto the [Captain Lawrence-sponsored] Fairview FD hockey team”) to the jokey (“Go back to women”), the business-oriented (“Get Captain Lawrence as an insurance client”), and the wince-inducing (“Get a colonoscopy”). 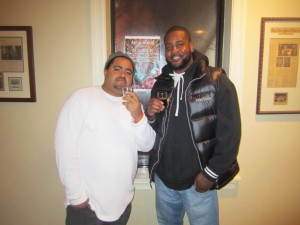 Elsewhere in the tasting room, Frederick Walker of Greenburgh is sipping the Black IPA—a very popular choice on the day—with James Royster of White Plains. James vows to spend a little more time at the brewery in 2013. “It’s very calm, a good environment,” he says. “Everyone’s friendly—I’ve met a lot of people just from tasting beer.”

Here’s hoping Frederick knows which to avoid in ‘13. 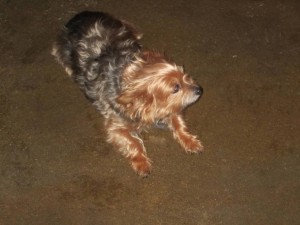 Meanwhile, Joe Pepe of Elmsford, and his exceedingly cute Yorkie called Maximus, is enjoying a little time off from the stress of police and EMT work, and looking forward to partying with some old Westlake High buddies on New Year’s. The resolution thing? Joe’s not having it.

“Why try to do something,” Joe says, “when you know you’re just gonna break it?”