People are reading
You are at:Home»Food Links We Love»Pigs, Pizza, Beer: Wreck the Halls and The Pig Dinner. Two Terrific Meals with David DiBari of The Cookery

I like to think our Small Bites contributors have sophisticated palates, and that they know a good meal when they taste one. No surprise, then, that two of our bloggers — Westchester foodie David Dallow and Seasonal Chef Maria Reina — were blown away by two recent experiences involving David DiBari, the talented chef-owner of The Cookery in Dobbs Ferry. 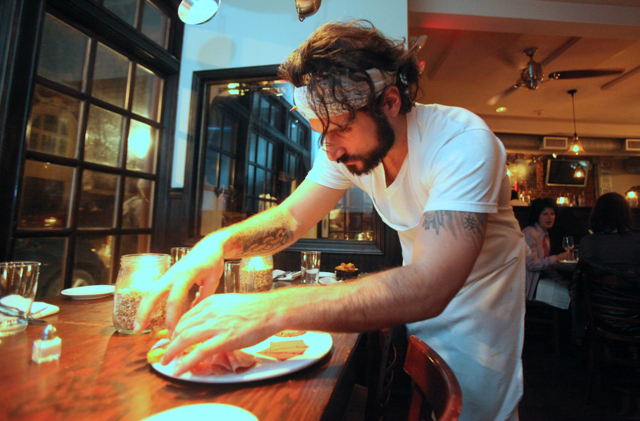 And David recently had The Cookery’s special “Pig Dinner,” where 6 to 8 people reserve a whole pig, which DiBari roasts and then carves tableside, serving a few appetizers and sides, too. In the words of our Westchester Foodie: “If loving a whole pig is wrong then I don’t wanna be right!” Read his posts here: The Pig Dinner at The Cookery, Dobbs Ferry

If you’ve been following Small Bites for a while, you know I’ve long been a fan of DiBari’s cooking, too. In case you’ve forgotten why, I’ve re-posted an old video about the opening of The Cookery and a blog post I wrote about DiBari’s creative menu twists, after the jump. And don’t forget to follow the links to our contributor’s new posts!

Getting Edgy with the New Menu at The Cookery, April 2010

Chef David DiBari at The Cookery in Dobbs Ferry already turns out expertly made, tender homemade pasta, serving it with comfort-food-king sauces like lamb bolognese. 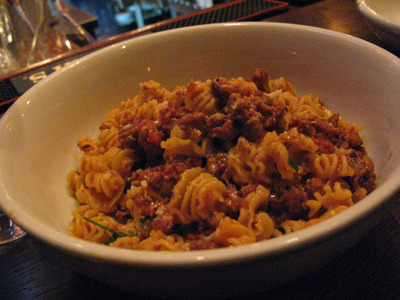 And he’s a master of tough-guy entrees like a Flintstones-size pork osso buco with polenta or a beefy charred rib eye with goose fat potatoes.

But now, he’s slaying a whole new category of dishes: offal. Sharing the appertizer menu with such flavor monsters as lamb sausage with chard and apricots is the ultimate in envelope-pushing: duck tongues and bone marrow. 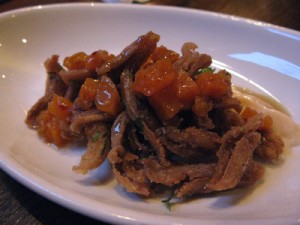 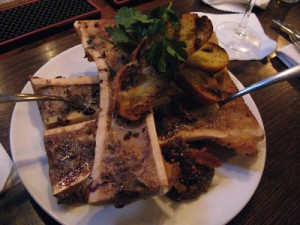 “These are lesser known cuts that yield amazing textures and flavors that are wonderful and exciting,” says DiBari. “And it’s important to me to be creative and to express that with those items so everyone else can become accustomed to them as well.”

Finally — a place in the ‘burbs for eaters on the edge.

“A lot of New York chefs have been using duck tongues, but it’s never hit the outskirts of Westchester or Long Island,” says Mark Pastore, the chief operating officer of Pat LaFrieda Wholesale Meats, the supplier that DiBari orders the tongues from. (It’s known as one of the top suppliers of meat in the country — they’ve achieved “rock-star” status, says DiBari.)

Pastore says: “He first started using us because he wanted to bring the best ingredients in New York City up to Westchester.”

The plate of about 20 tongues is served with roasted butternut squash agrodolce and polenta. The tongues are simmered in stock and aromatics for 45 minutues, which makes it easy to remove the bone in the middle. Then they’re fried and tossed with herbs and salt. 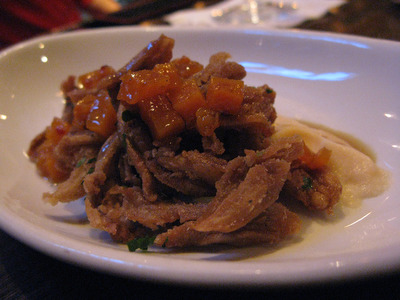 They’re super crunchy at first, but then the crispy texture yields to soft and sweet. Because the main ingredient is fried duck, and because there’s cinnamon and anise in the agrodolce sauce (which is also made with caramelized sugar, white wine vinegar and chile), it’s one dish on DiBari’s Northern Italian menu that tastes almost Asian.

“Those three elements do make it taste Asian,” says DiBari. “And the first time I ever saw duck tongues was in Chinatown.”

Margaret Beardsley, who lives in Bronxville, took her son to The Cookery for dinner before his return to Fort Bragg N.C., last month. She tried the tongues, and loved them so much that she was inspired to write to DiBari to thank him.

“I’ve seen them in Asian markets but never found the courage to try them,” she wrote in an e-mail.“What a delightful combination of texture and flavor! The dish was a masterpiece and it evoked memories of my early years in France. Proust can keep his Madeleine, I’ve got duck tongues memories!”

(I’m sorry to say, DiBari was not able to order the tongues for this weekend. But he says he’ll have them starting Tuesday, April 6. Call ahead to ask.)

As for the marrow, the bones are split then roasted at 15 minutes or 400 degrees. They’re sprinkled with garlic and thyme and sea salt and served with balsamic onions. (Mine here was with date marmalade, but he’s changed the dish since then.) There’s a little charred bread alongside. 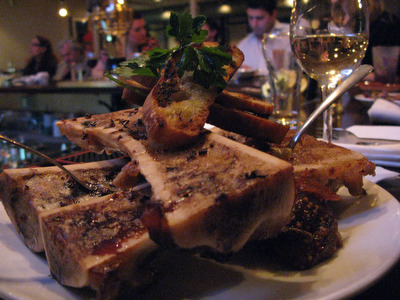 The marrow glistens. It is slippery and, at first, hard to get on your fork. Then, after a few bites, you let go of any inhibitions and scrape the concave hole in the bone, balancing each last little globule on it the tine of your fork. Spread some balsamic onions on your bread first — there’s that sweet and savory balance again — and then drop that melted marrow on top. Lip smackingly good.

And speaking of lips — here’s a funny story about DiBari and his enthusiam for nose-to-tail eating. Ever heard of chicken lips? They’re not on the menu, but not for lack of DiBari’s trying.

He’s so excited about experimenting with different cuts that he is willing to try anything he can get his hands on. He asked Pastore of Pat La Frieda Meats what other unusual ingredients he could order for the restaurant. Pastore relayed how the conversation went:

“I said, ‘Ever hear of chicken lips?’ Dave said, ‘Chickens have lips? I thought they had beaks?’ I said, ‘Of course they have lips, how do you think they talk?”

“He’s a very loveable guy — and I’m such a joker,” laughed Pastore. “Finally I said, ‘You moron — chickens don’t have lips!”

So if not lips, what else? After all, DiBari always has something cooking.

He’s been insipred by the beef tendon at Momofuku Noodle Bar in Manhattan, “but it’s pretty hard to get a sample,” says DiBari. “I haven’t used it before, but I’m so intrigued.”

DiBari’s new menu does include some more common ingredients, too. There’s a short rib “corned,” — “we’re just treating short ribs like corned beef; and serving with a light cabbage and potatoes and vegetables; it’s about as Northern Italy as it gets,” he says — and a new pasta: rigatoni with black pepper, provalone picante and black truffles. 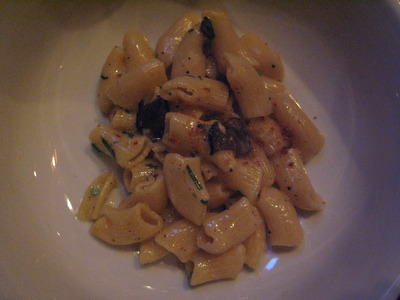 It’s DiBari’s take on a cross between cacio e pepe and mac’n’cheese. For $13, it’s an absolute stunner.

There are so many things to love about DiBari’s cooking: his superior technique, his sense for a balance of sweet and sour, his ethic for finding the best ingredients, his childlike passion for discovery. No wonder so many people pack the restaurant every night. 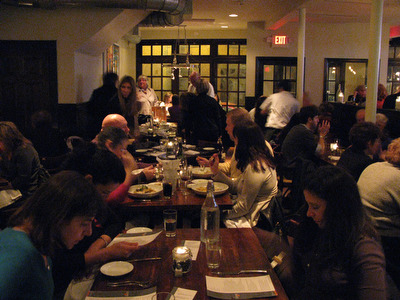 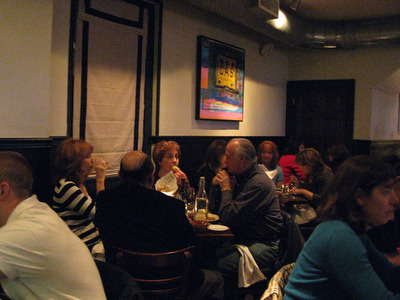 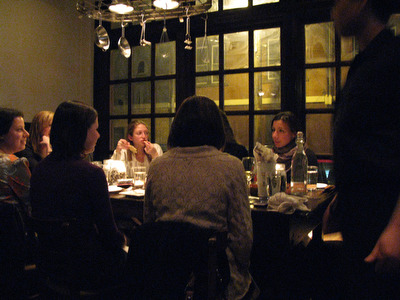 And DBari still has some of your favorite classics (if you can call them classics; he’s only been open a year). We loved our salads: 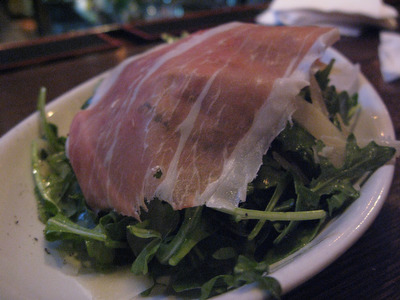 Click here to see a PDF of the new menu at The Cookery.