People are reading
You are at:Home»Entertaining»The Verdict: Christina’s Christmas Was A Success!

Hi all, and happy holidays! Hope you all had some good times, good rest and good eats.

And thank you – after my cry for help post, I got some helpful comments, tweets and Facebook messages. All of your input led to a very merry Christmas brunch indeed. I truly was able to achieve all my entertaining goals – preparing in advance, no running around maniacally Christmas morning & filling my guests’ bellies to the brim. 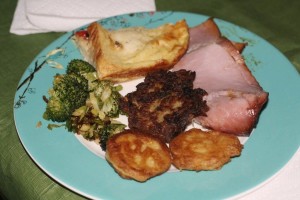 For the most part I planned dishes I could prepare in advance or would take little to no prep time. The final menu consisted of a spiral ham, roasted veggies, a strata (a recipe I nabbed from the December issue of Every Day With Rachael Ray) and latkes. The feast cooked up to be super successful and made for a Humbug-free holiday at home. Food was tasty, time was used well and my first go at latkes worked out despite my Jewish best bud telling me they were the ugliest he’d ever seen. It’s the taste that counts! 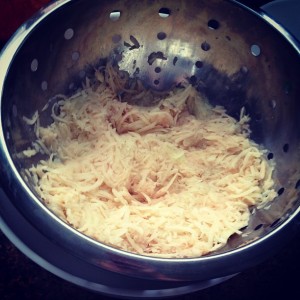 I was like a woman possessed with these latkes. Bound and determined to create the most crispy-yet-fluffy potato pancake ever crafted by a Gentile (quite literally, that’s my mom’s maiden name and everything) noob. However, they didn’t exactly lend themselves to my “fuss free” promise to myself, especially if I wanted them to be hot, tasty and fresh. Torn between conquering my goal and not wanting to rise before the sun and grate potatoes, onions and my nerves, I took to Facebook for answers. And answers I got! A college classmate assured me that making them the day before and reheating them in the oven would bring them back to life. Sure enough a few minutes in a hot oven made those bad boys just as crispy as the day they were born…which was the day before. Another life saver was an eleventh hour discovery of a grating attachment for my food processer. I usually forget I even have the thing since it’s just a one cupper, but it only took shredding the potatoes and onions in about two batches each to get them all done. Pretty sure I’d still be shredding still and sobbing for reasons other than the chopped onions. 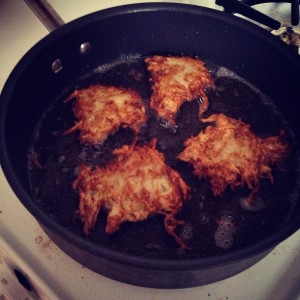 Me and Rach were pretty close this holiday (and always). Not only did I nab the strata out of her December issue, but it also lifted my potato pancakes straight from there. Each issue of Every Day offers a feature of one dish several ways so naturally the holiday edition featured lots of latkes. The article lists a basic recipe and then variations that are simple tweaks on that. I went for the traditional potato pancake version but being the late-in-life overachiever that I am attempted the sweet potato ones as well. The directions only listed different potatoes and red onions as the swap outs, and still called to fry the sweet potato version like the regular guys. I think this was too simplified – the sweet potato ones were really hard to fry. Though they turned out MEGA tasty – cooking them was an epic battle between the temperature of the oil and the sugar content of the sweet potatoes. A commenter on my last blog suggested a recipe with an oven-fried technique that might be the ticket next time I give the sweet potato latkes a go. And there WILL be a next time, mega delicious.

Speaking of the strata, though it was a crowd pleaser I could’ve skipped this guy. Between the ham, latkes, veggies (which were just pre-cut brussel sprouts & broccoli tossed with salt, pepper, olive oil & almonds and roasted) and my mother’s corn fritters the gruyere and red pepper strata was carb overload. I know it’s mythological concept that carb overload exists on Christmas but indeed it does and the beast goes by the name of Strata. The thing is that this dish was SUCH simple prep, barely anything beyond mixing and layering pre-sliced bread. I think if I were to add it back I’d go for a sweet, bread pudding version that could serve as a dessert of sorts.

Musings on My Christmas Story

I basically got everything I wanted out of hosting, seriously no one’s felt this accomplished on Christmas since Ralphie got his Red Rider. I wanted to have very little to do day-of but still impress my folks with the offerings. The wonderful/awful thing though was this really did last all day as expected, thanks to our various groups of family. While seeing them was the highlight of the day and keeping the food going really wasn’t an issue (thanks to some generous donations in that department AND I also had pizza fixins on hand), it was a LONG day. So though brunch worked out so well, it might serve us better to start the day a little later and take it easier in the morning.

Plus, I could savor this little face all day.

I liked hosting so much I decided to take on the adventure just a few days later. My husband and I threw a foodie/beer snob holiday party and fed our nearest and dearest pals with homemade yums and even treated them to a beer tasting. I’ll be dishing on that exploit next but for a sneak peek check me out on Instagram and the hash tag #teenstestkitchen to gander at some of the tasties I made for the gathering.