People are reading
You are at:Home»Restaurants»The Pig Dinner at The Cookery, Dobbs Ferry

Are you the type to fight with a friend or spouse over a beautifully burnished, crackly, crispy pig’s ear like a couple of starving terriers? If the answer is yes (or even maybe), then has The Cookery got the meal for you! 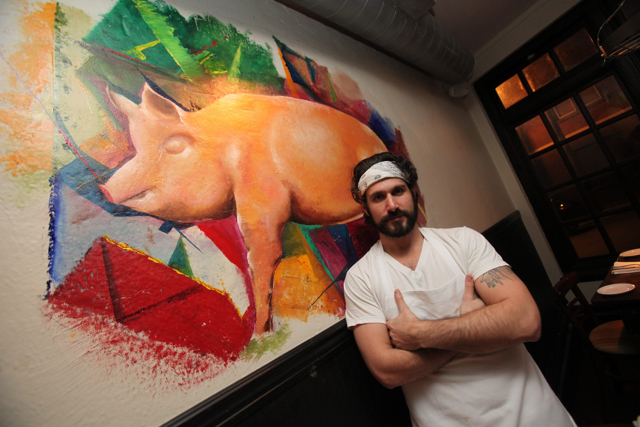 The appropriately named Pig Dinner promises a submersion in “gastronomic perversions and barbarism.” I, for one, can see the barbarism aspect, an entire pig placed between 6-8 hungry people with naught but a few pairs of tongs to rip and shred, but perverse? If loving a whole pig is wrong then I don’t wanna be right! 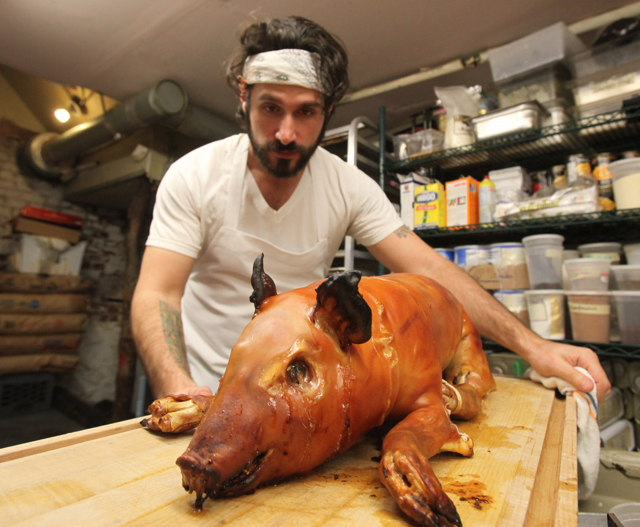 In fact, as someone who’s been known to roast an entire pig myself, I find it the opposite of perverse. There is absolutely no waste, no meat carved away to prepare a restaurant worthy loin chop for example. And the flavor when the animal is cooked whole? Again, I’ve described it as the opposite of perverse, pure. My exact words at the time were, “It was clean tasting, as if cooking it whole left an unblemished purity.”

For those who have never been to The Cookery, it is cool. Sort of that ’90’s grunge band, “I don’t gotta play by the Man’s rules!” cool. With exposed brick in some spots and a chalk board proclaiming specials many places could look like they’re trying too hard, like my dad with an earring. But at The Cookery it all just falls into place. Hip servers offer hip specials and one finds himself jealous of the patrons who are known and addressed by name before being led to one of the solid wooden tables. 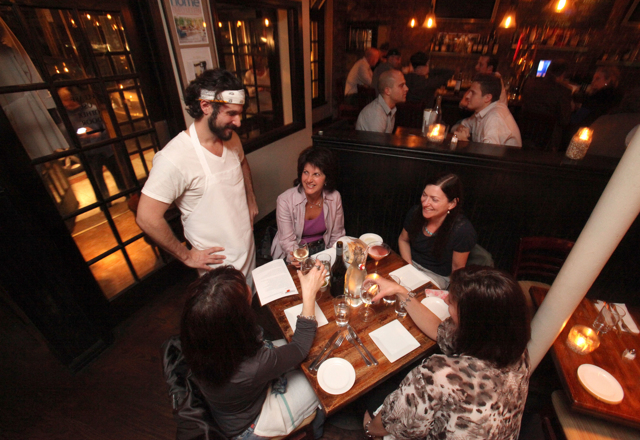 But not, however, the prime table set in the window at the front of the restaurant. Oh no, the only table at The Cookery that may be reserved, this is saved for those partaking in the Pig Dinner. 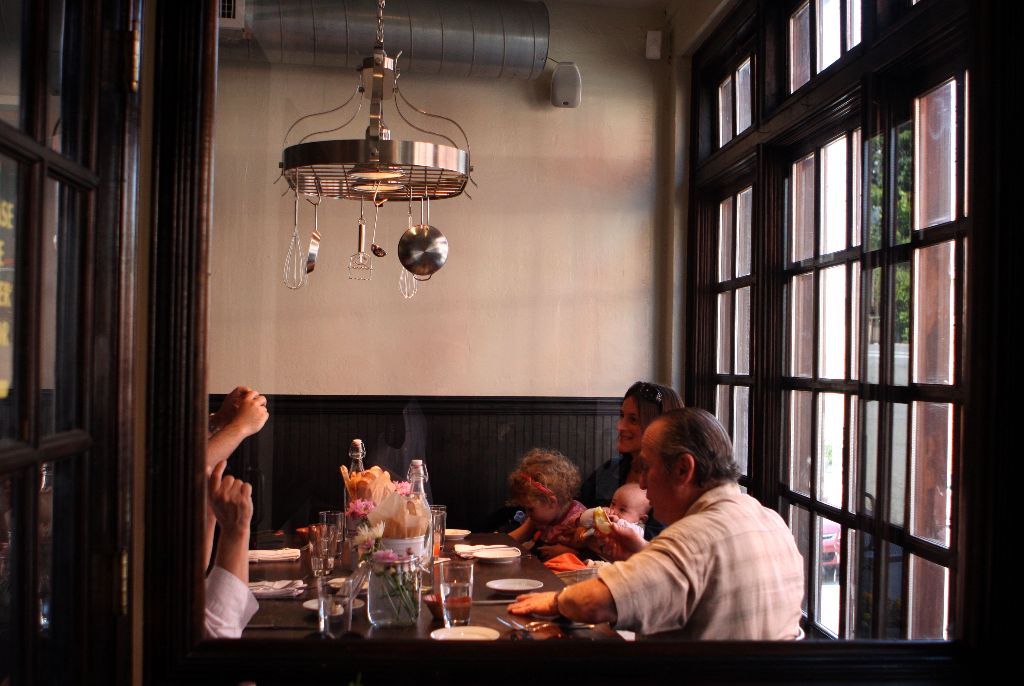 Priced at $65 per person, the Pig Dinner includes an appetizer, the aforementioned pig, and three market side dishes and dessert. Rustic as a whole pig might be, the appetizer allowed Chef David DiBari to flaunt his technique and attention to detail. A small slice of terrine was accompanied by a fantastic whole-grain mustard and vinegary cornichons, as well as beautifully charred bread. I knew what was in store for me food-wise but still finished every crumb. Also, on the plate was a blood pudding, served over a dollop of polenta. Both were incredible. The polenta managed to be creamy while maintaining a toothsome bite. It was a perfect foil for the much milder than expected blood pudding. Even those at the table who seemed at first dubious of the pudding finished every bite.

[A different charcuterie plate is here, but you get the idea:] 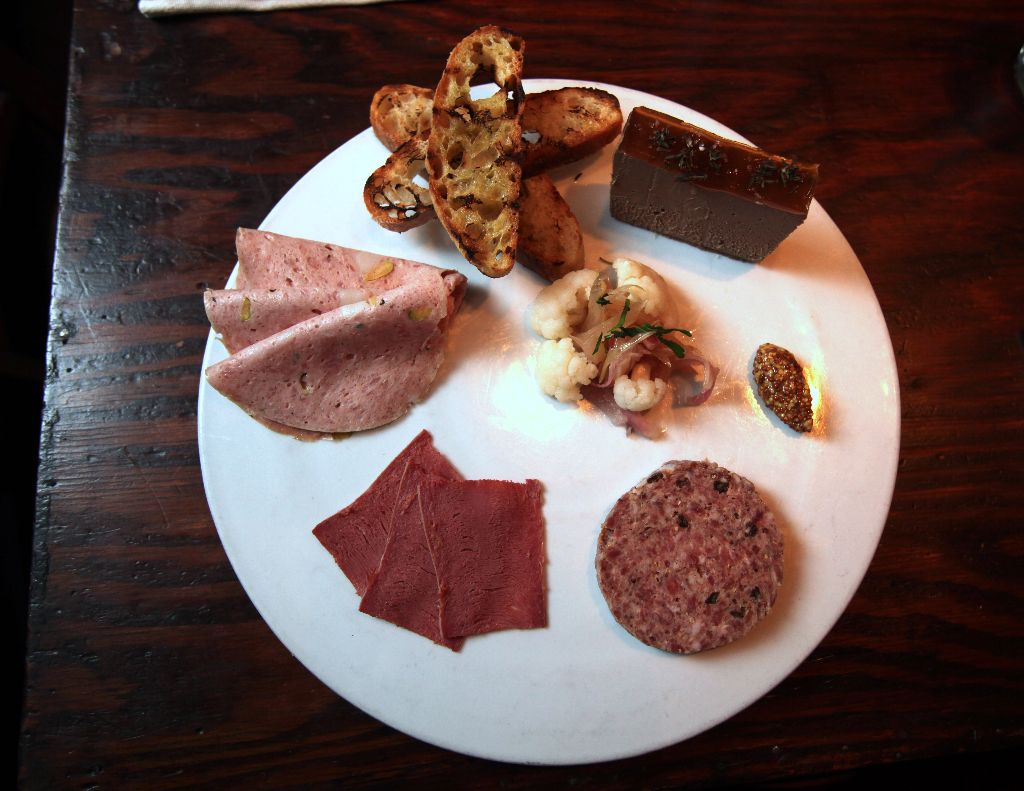 As great as the appetizer was, excitement was building to a fever pitch for the main event. Though I was sitting with my back to the dining room (take that normal diners not feasting on a whole pig!), a buzz amongst the other diners alerted me that it was showtime. As servers frantically cleared space at the center of our table, Chef DiBari himself walked the beautifully glistening pig to our table. He proceeded to, very quickly and efficiently, carve our pig right there on the table. Though broken down, the pig was still left in caveman sized hunks. We were left with tongs, instructions that the cheeks and ears were the best part, and the express hope that the table didn’t devolve into Lord of the Flies-esque anarchy.

The Pig Dinner is an event and the pig itself is a showstopper. Also, a stranger stopper. Not content to merely openly gape at our pig, numerous diners stopped by the table to see if it was all it was cracked up to be. After hearing our ravings I’d guess their attestations of a return visit were sincerely meant. Not willing to cede any ground on the “perversion” part of the dinner, I prefer my title, A Porktastic Orgy Of Self Indulgent Excess. That seems about right to me. Do yourself a favor: reserve a table soon and see if it seems right to you!