Well, the world didn’t end on December 21, which is good because there are still so many places the WBC has yet to try for breakfast! Even though the holidays are over and it’s now time to settle in for a couple of months of cold, we can keep things delicious by recapping how the WBC fueled our mornings during the holiday season. In December we enjoyed meals at: The New City Diner in Cortlandt Manor, Thornwood Coach Diner in Thornwood, City Limits (for a quick return visit), and King Street Restaurant & Bar in Chappaqua.

Remember to check us out at www.westchesterbreakfastclub.com 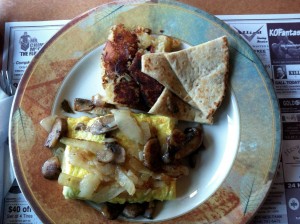 December 2: We begin the month with a simple, quick breakfast at the New City Diner on Crompond Road in Cortlandt Manor. Right off the bat, Sylvia and Jeff were impressed (maybe even a little overwhelmed) by the four menu pages worth of breakfast items. So many options! And thankfully, not only was the menu impressive, the food itself was impressive, too. Sylvia enjoyed the Ario-Greek Omelette, a hearty omelette containing feta cheese and fresh sauteed spinach. And, to enhance the Greek flavor, the omelette was served with warm pita slices instead of toast, a really nice touch. Jeff opted for a sweet breakfast, and loaded up on the peanut butter pancakes, which came with chocolate chips and bananas with a hearty dose of whipped cream on top. And don’t forget the maple syrup. Jeff didn’t complain. 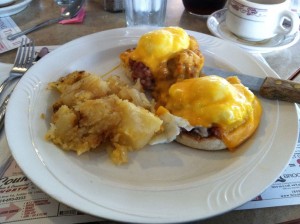 December 9: Thornwood Coach Diner.  It was a dreary Sunday morning and the group wanted something simple, so we headed over to the Thornwood Coach Diner, a place with many memories of late-night meals during high school. We gave bonus points for the very friendly service–and plenty of coffee refills! Sylvia went for her usual spinach and mushroom omelette, and while she rated it a bit bland in flavor, she particularly enjoyed that she was able to substitute broccoli for home fries. Shelley tried the Western omelette, which was satisfying not only because the ham, peppers, and onions were plentiful and well-distributed through the omelette, but also because the side of home fries were not doused in grease like at many other diners. Reid also had no complaints about his little kid breakfast of waffles with strawberry ice cream (sometimes you need a throwback comfort meal). The only weak link was Jeff’s poached eggs. The cornbeef hash with the dish was good, but the eggs were unfortunately overdone and didn’t have that nice yolkiness that one would expect.
The 411 on the Thornwood Coach Diner. 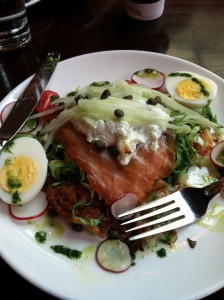 December 23: City Limits.  While the WBC paid an official visit to the renovated City Limits in August, Sylvia paid an unofficial pre-Christmas breakfast visit and decided to try something different: the house smoked Atlantic salmon & warm potato mushroom cake, served with a Hard boiled egg and Tzatziki. That’s a mouthful–and it was delicious. The perfectly-cooked salmon came served on top of the potato/mushroom cake, which was delightfully crispy. The tzatziki and capers atop the salmon added a nice addition to the flavor, and the hardboiled egg on the side balanced everything out. A good addition to Sylvia’s breakfast rotation.
The 411 on City Limits Diner.

December 30: We bid farewell to 2012 with brunch at the King Street Restaurant & Bar. This is a fairly new addition to the Chappaqua dining scene, so it was nice not only to support a newer business but also to break out of our recent diner routine. The two scrambled eggs that Shelley got were well-seasoned and very generous, leading her to suspect someone in the kitchen 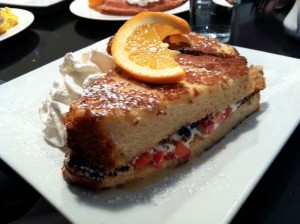 might have thrown in a third egg for good measure. The cubes of potatoes were balanced by slices of roasted red pepper. And the serving of sausage was generous as well, three links. The toast promised on the menu was absent, but no one even noticed because of the giant plate of red velvet waffles that we shared. The waffles were good, if a bit gimicky. Jeff’s stuffed French toast was a sight to behold, with a bountiful mix of fresh berries sandwiched between two thick pieces of French toast. Sylvia, meanwhile, continued her salmon streak with the smoked salmon and chive waffle, which came served with two poached eggs and a side caesar salad. The salmon and chives were mixed into the waffle, and all the flavors on the plate blended together perfectly for a hearty morning meal. We also gave bonus points for the spiced pumpkin cheesecake, a delicate house-made concoction that provided a smooth conclusion to this brunch.
The 411 on King Street Restaurant.