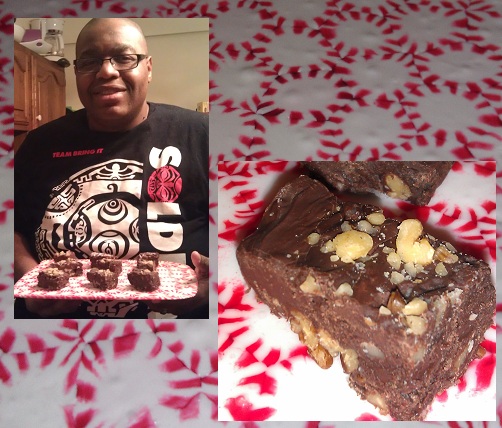 Hey friends!  Welcome to Foodies 101.  This being our first official post as columnists for Small Bites, we thought we’d start 2013 with a little bit of a back-story.  See, Kevin and I live in a 2 bedroom apartment in Putnam County.  We don’t have a lot of space to entertain and over time, we sort of resigned ourselves to just not having friends or family over but once or twice a year.  We have a small apartment stove and refrigerator, so cooking and storing food for more than a few people at a time isn’t always possible.  Don’t get me wrong, we make do!  But up until recently, we would only offer to bring a bottle of wine or a store bought cake to a friend’s house when invited.  It was just easier and sometimes cheaper.  Now that we have a food blog, we find ourselves saying things like, ‘We should do that, it’s for the good of the blog!’ or ‘We have never had Himalayan food, maybe we should go and write about it for the blog!’ – Everything we do nowadays is for the blog.  We love it because it gives us a reason to get out of our cramped kitchen and experience the culinary world around us that we spent so much time hiding from.

So that will bring us to our New Years Eve adventure.  My mom wanted us to go to her house to watch the ball drop, have a nosh and some champagne.   This was our chance to bring something that we didn’t just pick up at the store.  Kevin & I discussed making Sweet Onion Tartlets which is a recipe we had made a year or two ago and it was a big hit.  But I really wanted to try to make something I’ve never made before and somehow that ‘something’ turned into two something’s, which ended up as three something’s.  Yes, everything got out of hand and now it looks like a bomb of flour, chocolate and confectioners’ sugar went off in my kitchen.  But it was so much fun and we wanted to share it with you guys.

After some thought and web research, I decided that I was going to try my hand at making fudge.  Of course, me being me, I wanted something quick and easy.  I managed to find  a ’10 minute Fudge’ recipe.   Almost immediately after that,  I found these Lemon Ricotta cookies that I wanted to try out on my family’s taste buds.  I love lemon, so I may have had a bit of an agenda there.   And who doesn’t love ricotta cheese?  As soon as I saw this recipe, I was sold.  There were a lot of ingredients and we’re not used to baking from scratch but we were determined not to let that scare us.   So I printed out the two recipes I found and immediately the gears started turning.  I was already making my own edits and I knew my husband would be over my shoulder checking my work to be sure I was following the recipe properly.  I was getting stressed out just thinking about it!  I went to work on New Year’s Eve (we had a half day) and put the cooking and baking out of my mind until it was time to do it.  When I got home that afternoon, Kevin had already thinly sliced 4 large, sweet onions and had started to caramelize them in a pan with butter, thyme and a pinch or two of sugar.  They smelled so good.  I love onion!  I started up the stand mixer and got down to the business of measuring out the flour, baking powder, sugar, eggs, vanilla, lemon zest & juice that was required in the cookie dough.  By the time the dough was ready to be dropped onto the cookie sheets, Kevin had already lined them with parchment paper.  Together we prepared 4 trays of cookies (about 10-12 cookies per sheet) and baked them.  The texture of these Lemon Ricotta cookies is more on the cakey side, but they were so good!  Next, we combined more lemon juice & lemon zest with confectioners’ sugar for the glaze.  Now, even though we followed the glaze recipe word for word, the glaze was too thick to spread on the cookies without breaking them.  And that’s when it happened folks – my husband made an edit!  He added more lemon juice to the glaze mixture and it loosened it up enough to spread. We wrapped them up in a cookie tin so they would stay fresh. 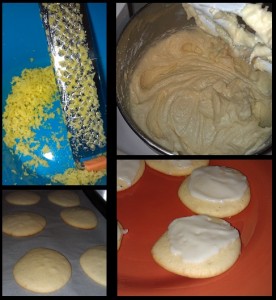 Now it was time for my little fudge project.  I added sweetened condensed milk to a preheated pot and then added the semi sweet chocolate chips one bag at a time, on low heat.  When the chocolate was melted into the milk, I added the second bag and let it come together before adding a few handfuls of chopped walnuts.   I greased a glass baking dish with unsalted butter and then lined the bottom with crushed pecan halves and on one side of the dish I also sprinkled some coconut.  Kevin was wondering what the heck I was doing, but fudge is a blank canvas!  It’s chocolate.  Just add whatever you love that goes with it– Dried cranberries or cherries, raisins, or any assortment of nuts.   When everything was melted together, I quickly poured it over the pecan and coconut mixture and pressed it down and around evenly.  Then I added another sprinkle of walnuts on top and pressed that into the fudge with a spatula.  I stuck it in the fridge for about 45 minutes to an hour.  Later, we would cut them into little squares.

Kevin was taking a video game break while I was preparing to make something really neat our friend Lorin gave us the recipe for over Christmas dinner.  It’s a serving tray made out of mint candy.  This is such a great idea and would even be fun for your children to get involved with, you won’t believe how easy it is.  You will definitely want to try this for your next party.  (I’m already trying to figure out what pink hard candies I can use to make one for Valentine’s Day). So, I got down to the business of unwrapping over 120 ‘Star Brites’ mint candies and placed them side by side on a cookie sheet lined with parchment paper.  I was getting frustrated because the parchment paper kept shifting around.   So, Kevin taught me a neat trick; Spray the baking sheet with a little non-stick spray and it actually helps the parchment paper stay in place on the cookie sheet!  I finished putting all the candies in place, leaving about an inch on all sides so it can melt without going over the edges.  On 350, the melting process takes between 7-10 minutes depending on your oven.  Never leave the oven while the candy is melting, it can easily burn.  We had attempted to make this the night before.  I had removed it from the oven and after about 5 minutes I removed it from the cookie sheet and within 30 minutes it had cracked right in half!  Oops.  It’s okay, the mint candy can easily be crumbled up and added to another dessert.  So, once my little red and white candy creation was finished, we removed it from the oven and just placed it on top, letting it completely set up and harden for about an hour before handling it.  I didn’t want another mishap like the night before. When everything was finished, I decorated the candy serving tray with the fudge.  Kevin, my own personal mad scientist & husband was fascinated with the candy tray.  He gently turned it over in his hands checking all the corners for cracks.  Although he was clearly excited to see how well it held up, you still have to be careful not to overload the tray and to fully support it from the underside with both hands.

While the fudge cooled, it was Kevin’s turn in the kitchen again.  He cut the crusts off of some thin whole wheat bread, then sprayed the bread on both sides lightly with non-stick spray before lining muffin tins with each slice.  He toasted the bread cups in the oven for a few minutes.  When he took them out, he dropped a small spoonful of the caramelized onions into each toasted cup, adding a sprinkle of shredded Jarlesburg cheese on top.  He broiled them on the bottom oven rack for a few minutes until the cheese melted.   We covered the onion tartlets with foil and set them aside to take to my mom’s where they would be reheated and served.

When everything was finished, we packed up the cookies, fudge and onion tartlets and headed to my mother’s for a fun filled, delicious new years eve.  Everything we made was thoroughly enjoyed by all and we were very excited and proud of our involvement in the ‘nosh’ part of the evening.  It just goes to show you, you don’t have to know what you’re doing or be a well seasoned chef to make delightful food! 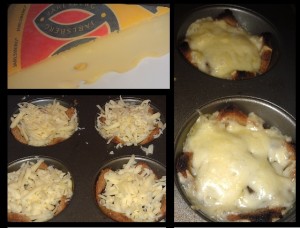 I wanted to formally thank all of the loyal readers of Small Bites, Foodies 101 and our own blog, Eats & Treats.  It is because of all of you that we have started to participate in the real world of food!   We realize now, that it’s not about what’s easy or cheap anymore.   Kevin & I have found that we are not only partners in life, but partners in cooking, mess-making, food-tasting and food blogging.   This whole experience has brought us closer together and given our hobby a purpose.   It’s a great feeling.  We hope that if you haven’t already found something wonderful like this in your life, that you are able to do so in 2013.  This could be your year to do something you are proud of.  Wishing each and every one of you a Happy & Healthy New Year!

Foodies 101 husband and wife columnists Aimee & Kevin Ellis came to our attention when they guest blogged for HVRW Fall 2012 for the first time.   By day they both work in customer service & sales but in their downtime they love to travel, try new restaurants and experiment with recipes in their own kitchen.  They strive to support small and local businesses and really enjoy blogging about their experiences.   With Kevin being an adventurous eater and Aimee being picky, they form an honest, unique and curious voice that will easily allow you to go along with them for the ride.    You can check out their personal food blog at Eats and Treats, you can also LIKE them on Facebook, and follow them Twitter and Pinterest.