People are reading
You are at:Home»Food Links We Love»Notes From the Captain Lawrence Tasting Room, Vol. 44 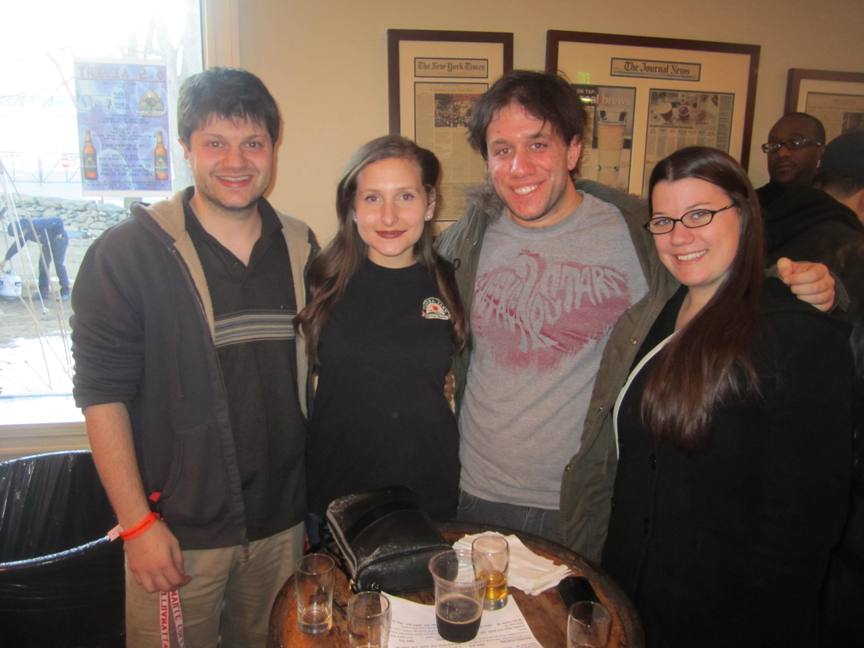 It was, simply put, the greatest assembly of exquisite hops since the NBA’s Slam-Dunk contest. New to the Captain Lawrence lineup was the Re-Intro NJ IPA, a classic American-style concoction dry hopped with cascade and palisade hops, made special for the Garden State. There was the small-batch Belgian IPA, made of Belgian yeast and American dry hops; the Six N’ Change Black IPA, an alchemic mix of malts and hops; and of course the flagship, Freshchester Pale Ale.

All that was missing on this blue-sky Saturday at the brewery is the Captain’s Reserve Imperial IPA, again a victim of supply not quite matching exuberant demand.

First, a quick note about IPAs. The British invented the India Pale Ale a few hundred years ago, when they hopped the heck out of their beers to preserve the flavor when shipping them all the way to India.

A gaggle of SUNY Purchase alumni is gathered around a table for this Hopapalooza. Casandra Maniotis of Dobbs Ferry works at the Pleasantville Farmer’s Market, selling Tierra Farm nuts, and brought some organic delicacies for the boys behind the bar–in exchange for a Black IPA. “It’s very hoppy, with very fresh hops,” Casandra says. “I really like it.”

Friend Sam Feinberg of Chappaqua has one of the more intriguing day jobs in the room—he runs the children’s center at a women’s prison in Northern Westchester. He’s passed on the various IPAs for the Winter Ale—no slouch in the body and flavor department either. “We’re catching up,” he says of his college mates. “We haven’t seen each other in a while. We’re old friends, getting old together.”

Another Purchase pal, Mike Villata, enjoys the Liquid Gold and proffers a sticker that says, simply, SMILE. I try not to, but do.

“When you come out of Purchase,” explains Casandra, “you go around spreading positive energy.”

The good vibes abound. It’s a gorgeous day, the temps defying the weather dudes on TV and creeping into the mid 40s. I’m looking out the back door, thinking about how you could almost play bocce in this weather, just as Credence Clearwater Revival’s “Looking Out My Back Door” fittingly comes on the house system. 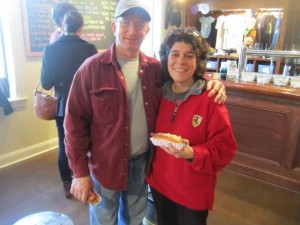 Clear water is about the best Penny Yellen of Mamaroneck can stomach. She and husband Anthony spent the previous night celebrating a friend’s birthday at Molly Spillane’s. The wine, laments Penny, flowed freely.

Anthony wears a Harley-Davidson hat and Penny sports a Porsche jacket, but both are in low gear today. Anthony sits atop a keg while sipping a Pale Ale; Penny stands and sips her water. The arrival of her County Fair hot dog—chili, provolone sauce, onions–from the Village Dog guys lifts Penny’s spirits.

They’d toured the Yuengling brewery over the summer, and were keen for such an adventure closer to home. “We’d been looking for another brewery tour,” says Penny. 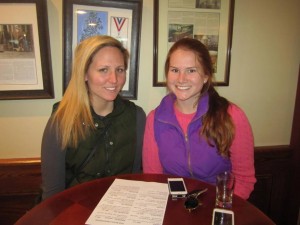 Across the tasting room, Megan and Meagan are skipping the tour. Besides claiming the award for Most Similar Names, Megan McCue and Meagan Prescott win for Furthest Distance Traveled; Megan is from Allentown, PA, while Meagan is from Stamford. “They don’t have anything like this in Allentown,” says Meagan, “so I thought it would be fun for Megan.”

Stamford Meagan is digging the Belgian IPA. “It’s not your typical IPA,” she says. “It resonates in the mouth…the taste is lasting.”

Allentown Megan is quaffing the Smoked Porter. “It’s a mouthful,” she says, adding that the Belgian ale Liquid Gold is more her speed.

The two have an eventful eve ahead: filling up a pair of growlers (the Pale Ale and the Belgian IPA, most likely) on the way out, watching football, eating pizza, then downing Sake Bombs at Kona Grill in Stamford.

The Me(a)gans describe the cult of Sake Bombs for the uninitiated. They involve chopsticks, shot glasses, and, if done right, disapproving stares from others in the restaurant. “The family next to you looks at you funny,” says Meagan. “But it’s festive.”