People are reading
You are at:Home»Columns»Restaurants near The Capitol Theatre in Port Chester: A Recap

Port Chester calls itself the restaurant capital of Westchester, and has every right to.

Famous names like Mario Batali have helped put the village on the culinary map. But thanks in large part to immigrants hungry for a taste of home, this 2.4-square-mile village has more than 100 eating establishments — many with no website, no publicist and certainly no cooking show. 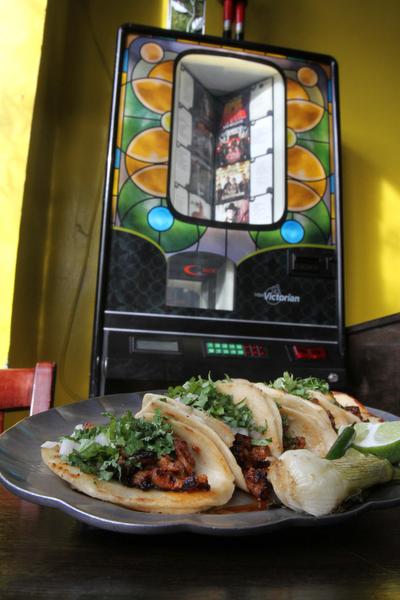 Port Chester restaurants are seeing a new clientele with the relaunch of the Capitol Theatre as a concert venue. We thought it a fine time to take an introductory tour of the village, including three eateries just one block up that are particularly emblematic of the village: a Salvadoran place, an authentic Mexican taqueria and a bar-restaurant with a Peruvian-Uruguayan-Argentinian thing going on. How many neighborhoods outside of Queens have a range like that?

This place has serious, authentic, get-right-to-the-point tacos. As in Mexico, they come with doubled-up, soft tortillas and a grilled onion on top of richly marinated meat. They’re about $3 apiece, and two can make a meal. Fresh green and red salsas come on the side.

The restaurant makes its own corn tortillas, and across the bright yellow dining room, you might hear the squeaking conveyors churning them out. Otherwise expect a very loud jukebox playing Mexican pop tunes. If you choose one of the wooden booths, be warned that they are not for large people.

This place is favored by Mexicans and others in search of authentic food; the menu steers clear of the more common, cheese-heavy Tex-Mex trend. There’s a “Capitol Menu” for expedited service on tacos and burritos. It was quickly launched for the crowds that streamed in the night the concert venue reopened on Sept. 4 — or as owner Adelo Ramirez fondly calls it, “Dylan night.”

The extensive menu takes you all the way from Peru — with classics like lomo saltado and ceviche — to the steak-loving Uruguay and Argentina, with a homemade chimichurri sauce.

Other favorites are the rice with seafood, described on the menu as a paella but more reminiscent of fried rice. It comes with mussels, clam, crab, tender calamari and vegetables. A lomo saltado entree is $11.75; arroz con mariscos, $16.

Expect some colorful surprises at this dimly lit restaurant, starting with a life-size Inca figure greeting you at the please-wait-to-be-seated sign. You can dine at the wooden bar, beneath a set of colorful hanging lamps, or sit at a table and look up at tapestries from the Andes.

The soundtrack also has personality, ranging from Gypsy Kings to Andean flutes to Latin pop. If you go on Thursday, be advised, it’s karaoke night.

This large, casual eatery is named after the Salvadoran staple, a thick, soft, corn tortilla with a pocket of cheese and other fillings. You can try a pupusa with queso and the edible flower loroco, to start. The menu gives a full range of chicken, pork, seafood and steak options. One tasty one is a thinly cut steak with shrimp, $15.95, which arrives on a skillet. The food is hearty, basic and non-spicy, starting with the marinara-like salsa and the cabbage accompanying the pupusas. Furnishings here are also uncomplicated. The menu doesn’t go out of its way to explain itself, so Spanish may come in handy.

Despite the bright blue awning, Nico’s could escape notice because of its location. Irving Avenue runs behind Westchester Avenue and feels like it’s in the theater’s shadow.

Inside the narrow restaurant are about a dozen wooden tables and minimal wall decor — brushed-steel sconces and folksy drawings of chickens.

Daily specials might include quinoa soup — which should not bring to mind the light, citrusy treatment that quinoa tends to get at health food stores. This is a hearty beef and potato stew flecked with the tiny curlicue grains, with a lime wedge on the side. Airy white rolls come with two creamy sauces — a red one flavored with rocoto chile and the other with the yellow aji pepper.

Chaufa de mariscos, fried rice with seafood, is a hill of calamari, mussels and crab mixed with rice and a bold soy-sauce flavor. And fish-and-shrimp ceviche is lime-drenched and spicy, heaped with red onion.

Other entrees are an $8 half-chicken combo with two sides, and the well-loved anticuchos — beef heart skewers. You can snack on fried yucca, or experience a true Peruvian moment and order an ear of corn — choclo, the dense, large-grained variety — coated with cheese.

If you go to Sichuan Pavilion, allow plenty of time — only because the flavors are too good to rush through.

The pan-seared pork dumplings win raves, but Sichuan steamed dumplings, $8 a plateful, are another great starter: meaty and flavorful, with chicken, pork and water chestnuts bound up in a tender wonton shrink-wrap. They come with a brown sauce, chili sauce on the side.

Ja Jiang Mein, $10.50, is a noodle dish, warmly spiced in a thick, “hoisin infused” chili sauce incorporating minced pork, green peas and onions. Seafood Casserole, a $27.50 chef’s specialty, arrives bubbling away in a covered clay pot. The “casserole” refers to the pot, and does not imply baking. A base of brown oyster sauce turns up shrimp, scallops and tubes of tender calamari.

Chan is eager to show you what he’s done with ginger syrup, and he wants to put his General Chan’s Chicken up against any General Tso in Westchester. He also knows that some visitors “have to have the chicken and broccoli,” he says. “I can’t take that away from them.”