People are reading
You are at:Home»Restaurants»Openings»For a Sneak Peek of Fortina in Armonk, Hit the Chef’s Table at Cooked & Co in Scarsdale

Chef-owner Christian Petroni is workshopping dishes for his new restaurant, Fortina in Armonk, and he wants your help. At 7 p.m. Saturdays starting Jan. 26, he’s introducing a chef’s table at the adorable catering-take out spot where he is a partner: Cooked & Co. in Scarsdale. 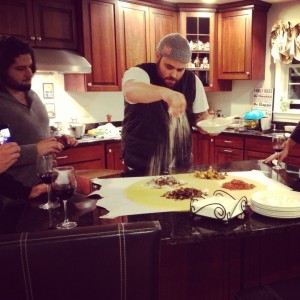 The Chef’s Table, set up in the front of the big window that looks out onto the street at Cooked & Co. will be communal, seating about 16 people. The dinner, which will be four to five courses, depending on what’s in the market, costs $65 per person. It’s BYO, and Christian says everyone should come with a mindset of sharing both wine and food. Some dishes may be served family style, though most will be individually plated.

“They will be sitting with other people that are just as passionate about food as they are,” he says. “These dinners are all about the food.”

Fortina, which he is hoping to open at the end of March, will have a wood-fired oven, and the menu is based on Petroni’s training in Spanish cuisine and his childhood summers spent in Italy. Christian was the chef de cuisine at Peniche in White Plains and chef at Barcelona in Greenwich, Conn., and Fortina is the name of a little fort that his grandparents own on the island of Ponza off the west coast of Italy.

The Chef’s Table menu will change weekly depending on what Petroni’s working on, but a couple of dishes for the first dinner might include bagna cauda with prosciutto, bread and raw vegetables; spaghettini with toasted sesame seeds, bone marrow and pecorino; and baked ricotta with hazelnut granola, preserved Meyer lemons and black truffles. Wow!

The first Chef’s Table, on Jan. 26, is already sold out. Email Christian at fortinapizza@gmail.com to be on the waiting list for upcoming Saturdays.