People are reading
You are at:Home»Cooking»New York Foods Star on the Inaugural Luncheon Menu

Hudson Valley apples, wine from the Finger Lakes and Long Island and two cheeses from Cooperstown that are available at the Palisades Winter Farmers Market will all be on the menu at the 2013 Presidential Inaugural Luncheon Monday. 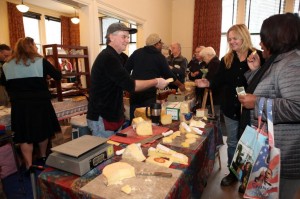 New York foods are being featured prominently because U.S. Senator Charles E. Schumer (D-N.Y.) is the Chairman of the Joint Congressional Committee on Inaugural Ceremonies.

The main course is Hickory Grilled Bison with a Wild Huckleberry Reduction, Strawberry Preserve and Red Cabbage. Accompanying it are a red potato horseradish cake; baby golden beets and green beans; and butternut squash puree. The wine, from Long Island, is a 2009 Merlot from Bedell Cellars.

“Cooperstown may be better known for the Baseball Hall of Fame,” Schumer said in a press release. “But I can promise this cheese is going to be a home run.”

Other New York products include Ida Red and Gala apples from Golden Harvest Orchards in Valatie, Columbia County in the pie; honey from Seaway Trail Honey in Rochester; and maple syrup, which is also an ingredient in the butternut squash puree, from Crown Maple, also based in Columbia. The head chef of the Inaugural Luncheon, Shannon Shaffer, is a graduate of The Culinary Institute of America in Hyde Park.