Hey Foodies, Aimee here!  I have a funny/yummy story for you that I think you may get a kick out of.

I recently became reunited with my former best friend Nicole from my school days.  We had lost touch and hadn’t spoken in about 13 years. Since I spend all day on 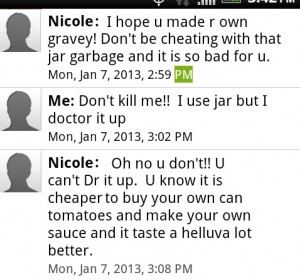 the phone at work, the last thing I want to do when I get home is get on the horn. It’s because of this that Nicole & I have been using text messages to catch up with one another.

Well, last week Nicole & I were texting back & forth about what was for dinner and she asked me if I make my own gravy.  She was appalled to find out that not only have I never made my own gravy but I regularly use pasta sauce from the jar & enjoy it!  I didn’t think that coming from me, this would be a huge surprise, but I guess we’ve been out of touch so long that she just couldn’t believe it.
As a true Italian, Nicole does a lot of her cooking from scratch.  And if she can do it with 2 young children to care for, then I had no real excuse not to do it myself. She really inspired me to try to make my own gravy and she said she’d help if I needed it.  I decided that I would do just that and chose last Sunday to try it out because I knew I’d be home all day to let it cook for several hours.  In the days leading up to Sauce Pot Sunday, I prepared by watching some YouTube videos on how to make your own sauce and then I called my mom for her sauce recipe.  When I was sure I had it down pat, I sent my husband to the store for canned tomatoes, beef broth, Italian sausage, and baby back ribs. 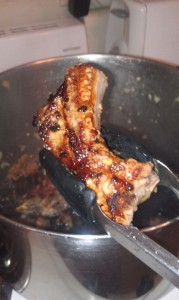 Kevin, played the part of my lovely assistant.  We started out with a little olive oil and garlic in an 8 quart pot on medium high.  Kevin roughly chopped a white onion and tossed it in to saute as well.  He started opening the canned, peeled tomatoes and pureed them in the food processor, while I cut the 5 links of sweet Italian sausage in halves, turned the burner on High. I tossed them into the pot, rotating after a few minutes to be sure all sides were brown.  Kevin handed me a large bowl to transfer the sausage over while he unwrapped and rinsed the baby back ribs and added them.  I browned those on both sides & transferred them into the meat bowl as well.

Lastly, we added a few pieces of cubed chuck steak that Kevin decided he wanted to add to the sauce, so I browned those also.  When all the meat was nicely seared & out of the pot, I looked down and to my dismay, saw that my garlic had turned into burnt, unrecognizable little black dots!  I really wasn’t sure what to do.  I called to Kevin who was in the living room watching TV and asked if I should de-glaze the pot a little with the beef broth.   He said I should add the tomato puree first, then the broth – but then in a not-so-sure voice he asked, “What does the recipe say to do?”  I kind of just stared into space.  I hadn’t written down any particular recipe. I was checking my text messages from Nicole and using her advice and my own instincts.  But I was already starting to feel that old familiar Food Failure creeping in.  When I was growing up, if I was attempting to cook or bake something and it went awry, I just gave up.  But here I was in my kitchen among all these ingredients in which we spent our hard earned money on, I wasn’t going to turn back!  So I added the tomato puree (Three 28 oz cans) to the pot, added a little over a cup of beef broth and several generous shakes from the Italian seasoning container. 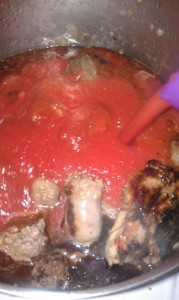 By now it was just after 1pm. We partially covered the pot and let it cook, stirring occasionally.  After 2 hours or so, I realized that the sauce wasn’t thickening at all. I also noticed that the little black dots of burnt garlic were totally mixed throughout the gravy, and I know for a fact that burnt garlic is not a pleasant flavor.  Kevin and I started looking through the cabinets for something to add that would thicken the sauce a little. I mentioned to him that my mom will sometimes throw a jar of Franco Rinaldi (my personal fave) into the pot to help thicken it up.  We didn’t have any of that because Tuttorosso had been on sale the week before so Kevin grabbed a jar of that and tossed it in before either of us could changed our minds.  I was feeling disheartened and still being under the weather from a sinus infection, I decided to leave Kevin to watch the pot while I went to take a nap….

While Aimee was sleeping,  I couldn’t help himself, I got up and took a little taste of the sauce and though it was finally starting to thicken I thought the flavor needed to be enhanced a bit.  So, I did something out of the ordinary …I improvised while cooking! (I know, shocking, right?  Haha.)  I added more Italian seasoning  (a little over a tablespoon),  1/2 tablespoon of dried Basil, and a tiny pinch of crushed red pepper flake.  I know that Aimee would kill me if she saw me adding that to the gravy because she is a afraid of spices, but it needed a little zip.  This wasn’t that big of a stretch, since Aimee’s mother uses hot sauce in her own gravy recipe to off set the sweetness of the tomatoes.  The taste was great.  I gave the gravy a stir now and then and kept it partially covered in between.  When Aimee woke up, the first thing she did was check the gravy pot!  She was pleasantly surprised that the sauce had thickened over time and I eyed her carefully as she grabbed a clean spoon and went in for a taste.  I was a little afraid she would notice the kick from the red pepper flakes but instead she said ‘Mmm!’ and smiled at me.  Phew!  I was in the clear and we were well on our way to having a delicious gravy with our fresh pasta ravioli for dinner.

OK, well, just so you all know – I only found out about the red pepper flakes on Wednesday, a good 3 days later.  Kevin is very lucky I didn’t see him put that red pepper in because there likely would have been an argument over that!  And it’s okay because now I can say he was totally right in doing so.  It’s a win/win.  Kevin gets to be right and the red pepper flakes worked well in the sauce.   Kevin boiled up the ravioli while I got out our pasta bowls from the cabinet and sliced some Italian bread.  Within 10 or 15 minutes we were sitting down to enjoy our wonderful Sunday Sauce.  It was a beautiful deep red and full of flavor.   Note to Self: Next time don’t add garlic until after I’ve seared the meat.

I’m so glad this worked out, even though there were a few bumps in the road, our gravy was totally worth every cent it cost to make, every hour it it took to simmer and every second of anxiety it gave the both of us! 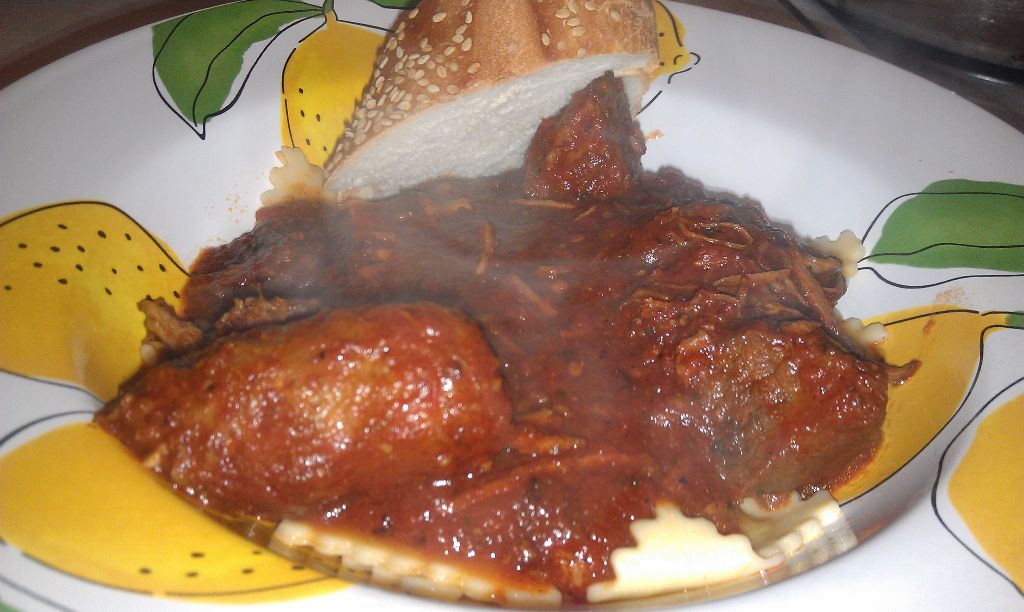