People are reading
You are at:Home»Cooking»A Dinner Party is Born: The Eats

It’s time to cut to the chase – the food.

Arranging a date for the party may have taken some jostling and my single-stop shopping trip didn’t work out quite that way, but one thing actually was smooth sailing – the cooking. And at a dinner party where I was really trying to flex my foodie muscles, that’s all that really HAS to go off without a hitch. I think the keys to my success with these recipes were: picking dishes that I not only could work on the day before but were BETTER that way, choosing exciting cuisine but not trying to re-invent the wheel and lastly testing a few of the trickier components before committing to putting them on this menu. I followed recipes for almost all of these dishes, but found spots to add my own tweaks. Without further adieu I present to you the good stuff, the eats… 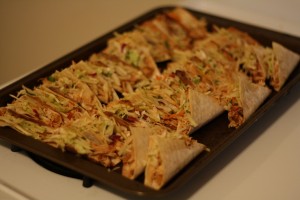 Time for a big reveal, though I have raved on endlessly about unabashedly chowing down with seemingly few restrictions, I am actually the proud sister of a registered dietician. Or as my father calls her – the police. Not only was she on the guest list for the evening, but also I am actually not of the school where quantity (or sheer gluttonous greasiness) is the immediate recipe for success when crowd-pleasing with food. (Though I recently did something so wicked with brussel sprouts I’m not even ready to share it. But I will. In due time, friends, in due time.) So when said sister mentioned that wonton wrappers can be a good start to some healthier options, the taco recipe I’d mindlessly pinned weeks prior immediately sprung to mind. Not only are these wonton wrapper shelled chicken tacos healthy, but they look super impressive when in all actuality are pretty darn simple. The initial recipe calls for the chicken to be some version with BBQ sauce, but I chose to instead make a pulled salsa chicken in my crockpot the night before the party. It literally was just 6 boneless, skinless chicken breasts (I believe I used only 4 though) and a jar of salsa. Toss the chicken in a crock pot, hit those babies with a healthy dash of S&P and top them off with the whole jar of salsa, then let them stew on low for 6-8 hours (or high for 4-6). The first time I made this recipe I was hesitant that just the salsa alone with make the chicken as juicy as I wanted so I threw in some stock. It didn’t kill it, but this time I knew I didn’t want there to be TOO much liquid so I used just the salsa. The instructions I adapted this from called for a packet of taco seasoning, but I like how bright my flavors turned out with just a jar of mild salsa, I even hit it with a little lime juice to enhance that. 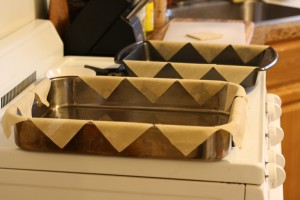 For the taco shells, I really followed this and that was pretty standard. Just baby sit them as you bake and really you can just see them start to turn brown so you know they’re done. I stood them up on a baking sheet as I was pulling them off which – since I didn’t fill them right away with the chicken – sort of made them close a little too tightly and I lost a few soldiers when I went back to fill them. I recommend either using a pan that will make the gaps of the shell wider to begin with, or do what I did – pop the pan of shells in the oven for about 30 seconds here and there to help the shells become more malleable as you fill. As I was filling them with the chicken and the cabbage (which I just followed the same original recipe again) I was once again standing the finished tacos up on a baking sheet. The last step called for the finished tacos to return to the oven to bake a bit more. Standing the guys up as I had made the chicken stew a bit and moisten the wonton shell which returned the bottom to a more, gummy wonton consistency. (Think a fried wonton, if you ever had one of those.) The result still wasn’t unappealing, but I recommend laying them flat on one side to spread them out and allow them to crisp up. Also, you don’t have to top with the cabbage mixture, but if you’re going to replace with say lettuce and tomato, that will have to be another step after the oven, since those will wilt under the heat. These were a big hit with my guests, especially my sister!

This dish sort of came together out of my own creation and was the dish I was most nervous about. I am a big fan of sushi tuna and the textures of poke. Also I knew that the crowd I had invited were all somewhat adventurous eaters and would be the perfect guinea pigs. But guinea pigging your nearest and dearest can only go so far, this is one of the ones I test kitchen-ed. I pulled a few recipes of the ‘net and kind of pieced together my own version from a few. Ultimately, I used two fresh tuna steaks (these will be raw so this is not a place to cut corners), 1 ½ tbs sesame oil, 1 ½ tbs soy sauce, ¼ cup of chopped green onion and a handful of chopped macadamias. Other recipes included more substantial ingredients – like say avocados – but really I just wanted to season the tuna well as it was really only supposed to be a bite served up on a chip. The wonton wrappers came out again for those chips, only this time – I fried the suckers! But even so, I didn’t serve up a heavy portion of these and folks only had two, maybe three helpings. I definitely also could’ve baked the wonton chips, but frying them was just so tempting and SIMPLE. To accomplish, just slice the wonton wrappers in half (or egg roll wrappers in fourths) diagonally and pop them in some hot oil. They take maybe 30 seconds per side if the oil is nice and hot. They serve up nicely at room temperature, so you can do these a few hours in advance like I did. The tuna I tossed up as the last thing I did since it was just slicing and stirring and assembled the 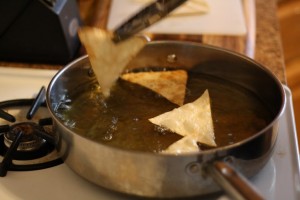 nachos as guests entered so they didn’t sit out.

Usually, when folks come calling I always have a veggie tray that I’ve diced up myself, as well as a home-made (well, home stirred!) dip. This time, not only were salsa and tortilla chips more on theme for the evening, but that whole reeling it in thing reared its ugly head. Luckily whipping up my own salsa would prove to be nearly brainless. I worked off my Dad’s go-to salsa recipes for these, and my first word of advice is  definitely do these at least a few hours in advance, if not the night before. First, your basic tomato salsa: 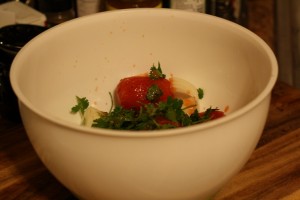 Drain the juices from the can of tomatoes and set aside. Then it’s just mixing the ingredients together and I personally pulse my hand blender through it a few times until it’s pretty liquefied (because I just like it like that.) You could throw the concoction in to a blender, or you could just chop it all by hand, it really doesn’t matter as long as you give it some time to mesh. If you’re blending though you really do need to drain the juice since it’d be way too much liquid once the tomatoes are pureed and release more. Also, you need to reserve the juices if you are also going to make the next salsa, the bean salsa. This is also my Dad’s creation: 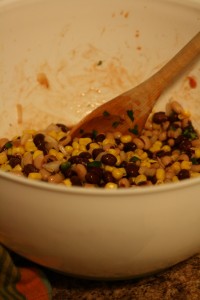 Juice from one can peeled tomatoes

Just combine all the ingredients and let them work together over night, (I have tried doing this once day-of and I assure you, it is missing something that way.) I’ve never tried doing this without also doing the tomato salsa (and thus always had a reason to crack open the tomatoes for 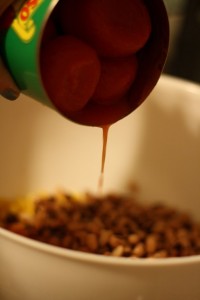 the juices) but maybe some dashes of tomato juice or if you had to some spoonfuls of jarred salsa. You just need to get a little more liquid in there.

The pork was – surprisingly – my least successful dish. It turned out fine, edible and tasty, but just wasn’t a show stopper the way the others were. Honestly, I just pieced together components from this recipe as well as this one, and marinated the meat overnight (3 pounds of pork shoulder, that is.) The meat did cook up to be shred-able and I served it by popping it in to my now-available slow cooker and letting people assemble their tacos in the kitchen. I offered up shredded Monterey jack, warmed tortillas and this version of pickled onions 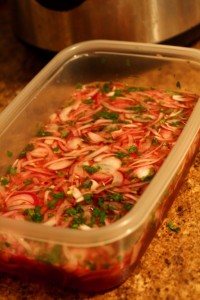 crafted the night before as toppings. They were tasty enough, but maybe not as special as the other offerings at my party. I wouldn’t say they were a failure, persay, but they were a hefty pit of prep-work for something that wasn’t a show-stopper. Also, I served every other item early on so I feel the main course shouldn’t been a better end-note than this was.

I will say that by the pork tacos, my guests were already pretty impressed with me and weren’t exactly mad at my “carnitas” course. I liked these recipes because they truly did come across like complex, back-breaking tasks and left my pals wondering what they did to deserve such treats.

Hahaha, suckers. A few tricks of the light and an obscure ingredient or two and I had them eating out of the palm of my hand. Or well… Rachel Ray serving ware. 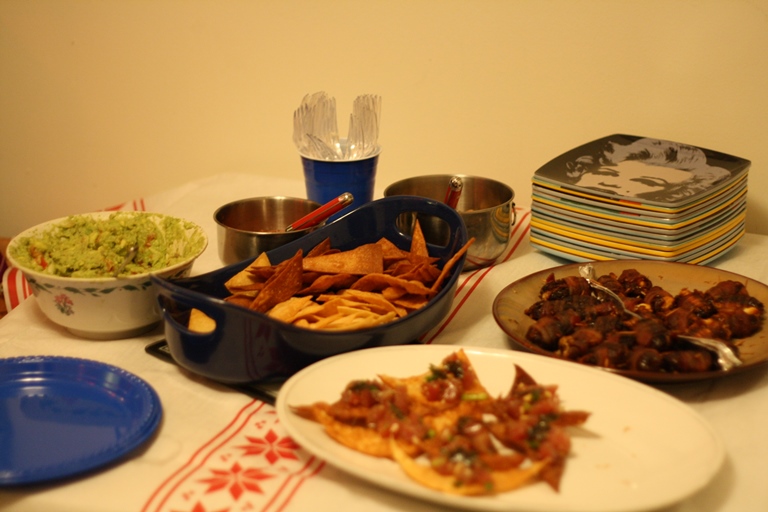 Next Up: The conclusion! Spoiler alert, it includes oysters, drunken Jenga and how to make the fuel for the drunken Jenga – my no-fail margaritas!