People are reading
You are at:Home»Food Links We Love»Notes From the Captain Lawrence Tasting Room, Vol. 47

The Feiner Things In Life 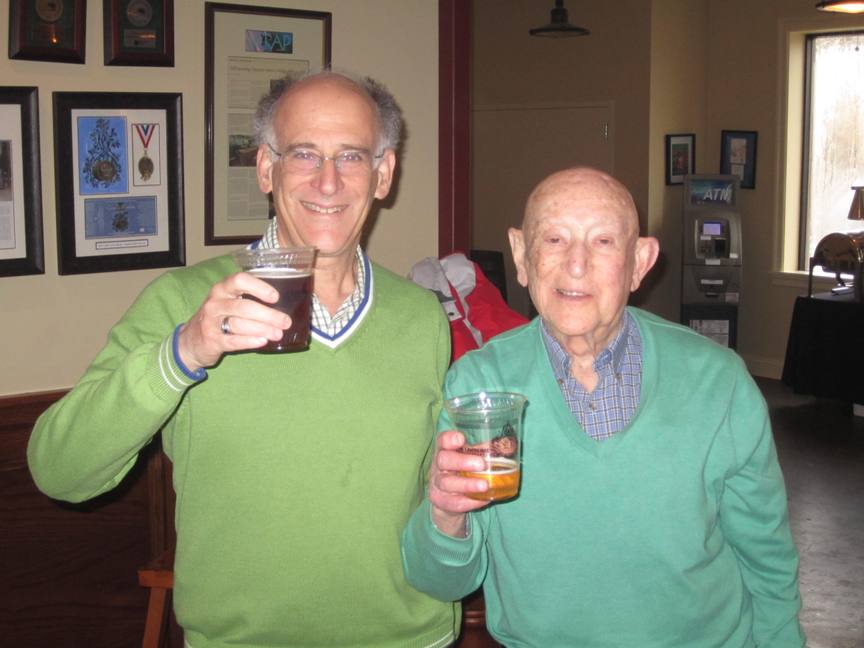 For Paul Feiner, longtime town supervisor of Greenburgh, home of Captain Lawrence, it is hardly beer-drinking weather. Paul prefers a beer in the heat of summer, preferably after a long bike ride or run.

“On a hot day, there’s nothing like a good beer to quench your thirst,” he says.

Instead, it’s 20 degrees out. But when Captain Lawrence produces a beer called the Pride of Elmsford (the village of Elmsford is part of the town of Greenburgh), Paul is happy to come by the tasting room and give the hearty ale a taste.

The Pride of Elmsford is an American pale ale brewed with English yeast and five malts, and dry hopped with U.S. hops. If you missed it, the Greenburgh Daily Voice gave the brew some love.

Paul does as well.

“Very good,” he says with a satisfied smile.

Paul, the supervisor since 1991, has a special guest in tow: his 91 year old father Phil, who has volunteered at town hall for the past 20 years, keeping an eye on town finances. Phil clearly has a nose for numbers, inquiring about Captain Lawrence’s yearly barrel output, and the alcohol level on the various brews. All pack more punch than what Phil used to quaff in the Air Force. “They gave us 3.2% beer,” he says while sipping the Captain’s Kolsch (ABV 5.5%, if you’re scoring at home). “You had to have a lot of them to get happy.”

Paul admits he’s not a beer connoisseur; he’s perfectly fine with a Bud or Coors. But he credits beer with helping get his blood pumping again after running the New York Marathon six years ago (“I couldn’t feel my feet,” he says), and he’s positively pumped to have a world-class craft brewer in Elmsford after spending its first six years in Pleasantville. “In a year, Captain Lawrence has definitely become the most popular business in town,” says Paul. “It’s definitely put Greenburgh on the map.” 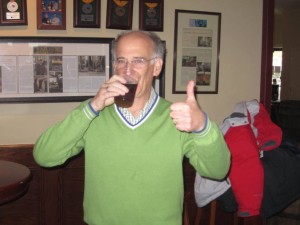 When he’s not running the largest town in Westchester, home to over 88,000, Paul unwinds by running or cycling around the county. He mentions a Special Olympics bike ride he took with John and Robert F. Kennedy Jr. years ago, from Westchester to Vermont. He’s cycled from here to Washington several times as well. “I may be the slowest cyclist, but I always finish,” he says.

Paul continues to lure new businesses to Greenburgh. He says he can go the extra mile for them by talking them up on his WVOX/1460 AM radio show (he’s also the rare town supervisor with a blog, at pfeiner.blogspot.com), and offering a degree of service other town chiefs may not match. Recently, he sent Captain Lawrence Brewing owner Scott Vaccaro a Wall Street Journal article about a bicycle built for 16, called the PedalPub, that he thought might be a great marketing opportunity, cruising down the Bronx River Parkway on Bicycle Sundays, adorned in CL logos.

“If a business has a problem, they can reach out to me and I’ll call back in a few hours,” he says. “We want the town to be partners and help them be successful.”

Paul laments that budget cuts have made Westchester “less fun.” But with an ice rink, golf driving range, mini-golf, the Sportime USA amusement center and various kiddie gyms all a 9-iron from the brewery, Elmsford has emerged as Westchester’s playground. Paul, who’s currently pushing for a new sports complex on Dobbs Ferry Road, credits Captain Lawrence for adding a little zip to the region.

“A place like Captain Lawrence is a little different,” Supervisor Feiner says. “It makes the county a more fun place to be located in.”