People are reading
You are at:Home»Drinks»Cocktails»A Dinner Party Is Born: The Conclusion

So we have come to the end of the road with this series. (Resisting…urge…to sing…Boyz To Men…) 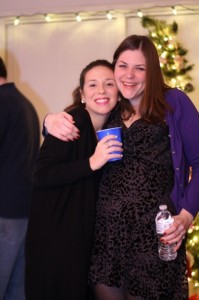 When December 29th finally rolled around, I had had the date on the books for the bulk of the holiday season, menu planned for about as long, accumulated necessities over the course of a week and spent two days cooking and preparing. Needless to say, I was quite ready to get to the partying.

Lately, when I have a get together of any size, I do my best to supply the refreshments. Gone are the days of folks trickling in, armed with a plethora of malt beverages and various salty snacks. I planned enough food to take care of dinner and even had enough drinks on hand for my pals to more than wet their whistles. But because they’re awesome, every last pair that sashayed through my door came bearing goodies. Here, I just want to share a few highlights and surprises that I pulled off with a little help from my friends. 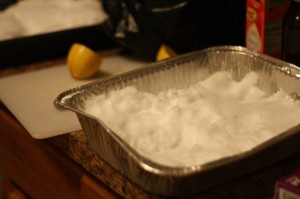 This past summer, while the rest of the country was engrossed in the “Kale Kraze”, my peeps and I all got hooked on some heroes on the half shell. Of course I’m not talking the beloved late ‘80s/early ‘90s children’s cartoon involving mutant turtle superheroes – our mutual love affair with those guys began years prior. Indeed, I am referring to oysters. I’m not sure who kicked off the trend, but before we knew it every last person in my circle – from my best friend to my sister’s boyfriend – were fixing for the salty suckers. So when the latter showed up to my party with bags of fresh Blue Points ready for the shucking, no one was hesitant to get cracking. Despite having been a summer love for our squad, oysters are actually famously best eaten in months that contain an “r”, (essentially fall through spring, every time BUT the summer!) And the DecembeR snow that covered the ground and threatened to cancel our evening, actually served us well by acting as a makeshift bed for our half-shells. After we finished the meal I’d prepared, we packed in to my kitchen and most of us even had a go at breaking those bi-valves open. We’re all still amateurs, but the tips I picked up that night are basically have a kitchen towel you’re willing to forfeit on hand to get a grip on the shell and then don’t be afraid to dig in there with the knife. Of the two we had, the shorter, stubbier shucking knife worked out better. My sister’s boyfriend (what up Nick?!) scored about two dozen Blue Points from AnS seafood in Elmsford for a fraction of what you would pay if you ordered them in a restaurant. As for the taste, they were oceany, salty and freakin’ delicious. 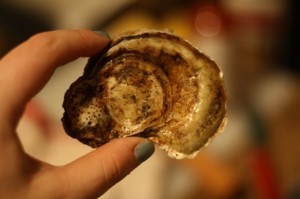 While I wanted to supply a nice offering of beverages for my guests, I knew that providing a full bar would maybe not be in my price range. At the same time, I didn’t want to be mega boring and just plunk out some sad light beers and cheap wine. So when my husband got inspired by the bounty of beers that Whole Foods had to offer, I thought a casual beer tasting could be a cool addition to our party. This ended up being fun. (So fun in fact that I think it deserves a full post!) But for some details for now, he began by pulling together a pretty easy selection. He started with a Sam Adams variety pack containing 6 different types of beer. Other than that, we also picked out a few specialties sold in larger bottles and hooked ourselves up with a growler-full of Whole Foods draft.  The result was an activity that got our guests talking and tasting, which is exactly what we were looking for. We even got cute with it and served the samples up in our mini-glasses left over from the Captain Lawrence tasting room. I had spent the afternoon arranging my living room furniture to seat all my guests, but I was actually quite happy that the party found its way in to my kitchen. We sipped beer while also working on the oysters which gave us something to do other than watching those poor shuckers do the dirty work. Also, it caused us to happen upon a completely unexpected discovery…oysters and beer go hand in hand. It makes perfect sense if you think about how well salty snacks and suds pair together, but it just wasn’t 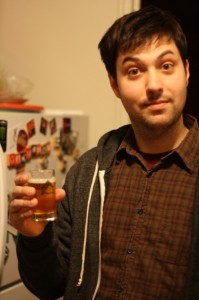 something I thought to combine. However, a little swig of Belgian beer and a freshly shucked oyster was probably the best thing I tasted that night.

I loooove a signature drink and if I am being completely honest, this one was ultimately the inspiration for this entire evening – the blessed margarita. I’m a big fan of the margarita and at the risk of tooting my own horn – I am pretty damn good at making them. Every now and then I do enjoy a frozen margarita, but I am very particular when it comes to them, they can’t be too sweet! I’ll offer you my method but really, this can be tinkered with until you find the perfect elixir mixed just for you. My only advice is to stick with good tequila, I’ve tried it with cheap-o brands (like Moctezuma…) and trust me – that is not a revenge you want to reap. But in all seriousness, in this recipe you actually play upon the flavor of the tequila a bit so pick a good one.

*I use a double sided jigger for these

1.5 ounce (larger side of the jigger) premium tequila

Juice of one lime, freshly squeezed

1 tsp agave nectar (give or take, to taste)

Seltzer (I use lemon lime, but you can use Sprite if you want this to be slightly sweeter) to taste.

Pour all but seltzer over ice and shake or stir. Add as much seltzer as you would like to finish the drink off. (More will help mellow out the flavors, but it will also be bubblier.) Enjoy!