People are reading
You are at:Home»Drinks»Beer»Notes From the Captain Lawrence Tasting Room, Vol. 48

Hardly Raven About the Big Game

A little over 24 hours before kickoff in New Orleans, the Captain Lawrence tasting room was as jammed as Bourbon Street—the lines for growlers more typically seen on the eve of Thanksgiving and holiday weekends. Interest in filling jugs with Lombardi Trophy-worthy brews such as Captain’s Reserve Imperial IPA, Freshchester Pale Ale and the Captain’s Kolsch was sky high. Interest in the Super Bowl—which ended up being a thriller that went down to the wire—seemed flatter than Joe Flacco’s personality. 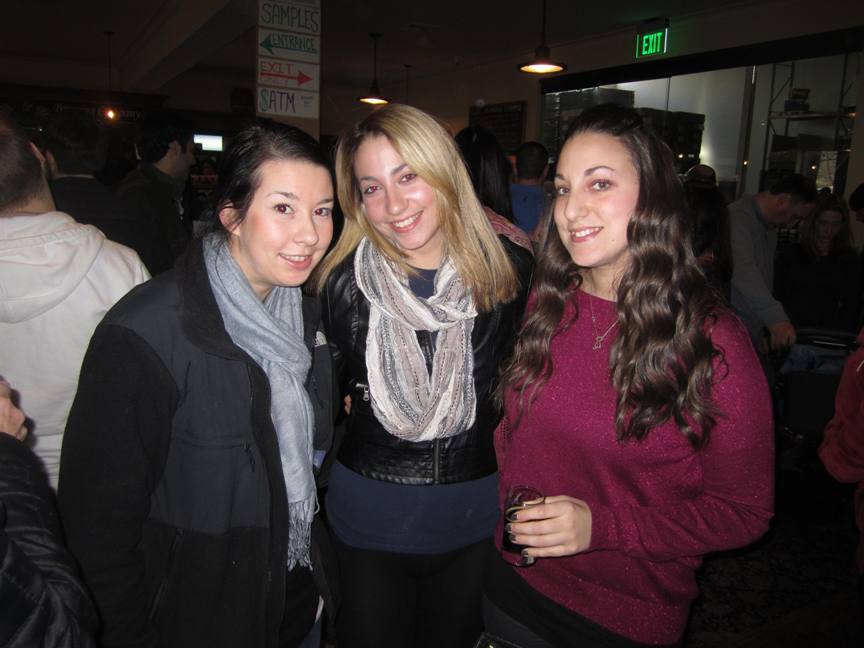 Joanne Wilson, a bartender at the Lazy Boy Saloon, wasn’t quite sure which teams were in the big game. But she clearly had absorbed at least a whiff of the pre-game hype. “I know it’s the two brothers coaching against each other,” she said while sampling the smoked porter with her sister, Julia, of Pleasantville, and friends.

Joanne nonetheless offered a ringing endorsement for her White Plains employer. “Fifty beers on tap, including Captain Lawrence!” she said. “And I’m a hard worker!”

Across the room, Naomi Crawley—we changed her last name upon her request to prevent shoulder-pads-and-helmets-wearing protestors in front of her Chappaqua home—wasn’t exactly indifferent toward the Super Bowl. She’s downright anti-football…American football, that is. “Don’t get me started,” said the Londoner. “It’s 30 seconds of play and five minutes of [mucking]around! In rugby, they don’t wear all that ridiculous gear. Give me rugby or English soccer any day!”

One is reminded of the pundit George Will’s take on football, which he described as combining the two worst aspects of America: “Violence punctuated by committee meetings.” (You might add power outages to that list.)

Naomi and her husband were stocking up on Captain Lawrence beer to have a few friends over for the Bowl—and other diversions. “The men will do the manly thing and watch the game,” she said. “The ladies will watch the commercials, and wait for Downton Abbey.” 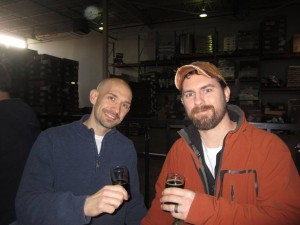 Indeed, it was tough to find much enthusiasm for the big game, especially with the Giants finished in December, and the Jets done in, oh, September. Tom Beaulieu, of Ringwood, New Jersey, hails from Massachusetts and was sorry not to see the Brady bunch in action. “The Patriots aren’t in it,” he said, “so I don’t care.”

Friend Trace Baker, a Portlander based in Bronxville, planned to spend Super Bowl Sunday with a growler in one arm and a baby in the other. “Other than taking this home, not much,” he said, hoisting a 64-ounce jug from Rogue Ales of Oregon that he planned to fill with the Imperial IPA. “I have a one-year-old at home and her mother is away.”

Trace had some “change” on the Niners, he added, and would root accordingly.

Hanging out in the much quieter pen inside the brewery, Greg Giampia of White Plains and Michael Conte of Fairfield, old pals from the University of Rhode Island, were digging the new Chocoholic Stout. “Delicious,” said Greg. “As light as a stout can be.”

Greg was planning to watch the game at the Lazy Boy Saloon, where, hopefully, he would not ask bartender Joanne to explain the nuances of the nickel defense. Michael was rooting for the Ravens. 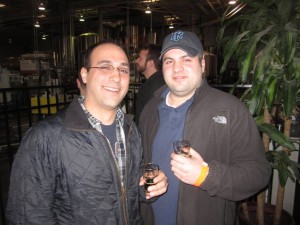 While Ravens running back/Westchester product Ray Rice had some 914 locals rooting for Baltimore, many in the tasting room were rooting not for the Niners or Ravens, but for themselves in the office pool. Frank Pansuti of Poughquag, in Dutchess County, planned to hit a few parties, and said he was hoping for Ray Lewis to get arrested. Larry DeCamillo of Hawthorne was going to swing by “VTB’s” place, VTB short for the colorfully-monikered Vinnie the Butcher. Friend Carmine Oliva of Scarsdale would be at Leewood Country Club in Eastchester and would watch the game “out of the corner of my eye” while playing cards.

“No one cares who wins,” said Frank. “We just want our numbers to come through.”

Captain Lawrence Brewing, at 444 Saw Mill River Road in Elmsford, is open Tuesday through Friday (retail 2-7 p.m., samples 4-7 p.m.); and Saturday, with retail and samples 12-6 p.m., and brewery tours on the hour, starting at 1. The author is paid by Captain Lawrence, partially in Freshchester Pale Ale.