If any type of restaurant immediately conjures visions of luxury, lush draperies, plush carpet, wine cellars overflowing with expensive options, it is the steakhouse. The experience is all about excess. Huge slabs of beef,  brought sizzling to your table, accompanied by rich sides such as home fries and creamed spinach. Think about that, even the spinach is luxurious, the addition of cream creating a dish so smooth and comforting, it is the culinary equivalent of a warm blanket on a cold night. 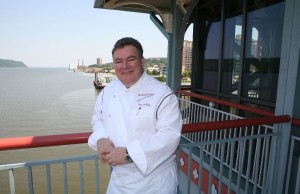 Westchester residents have no shortage of options when they’re in the mood for beef. Famed nationwide names such as Morton’s, Ruth’s Chris and BLT Steak, as well as respected New York City restaurants such as the Benjamin have have all opened outposts in our fair county. We also have many local favorites such as Flames and The Willet House. Steak aficionados tend to be willing to debate the relative merits of their respective favorites whenever the opportunity arises. I’ve seen heated arguments arise over which was best, “Sparks?! Are you nuts?! Have you ever even eaten at Peter Luger?!” Whichever your favorite, we here in the 914 are lucky enough to have many options.

However, we are also lucky enough to have the best option.* That’s right, we have the best steak with the added benefit of it being famous. A steak that put the Hudson Valley on the culinary map, defeated an Iron Chef and is exclusively ours. And it won’t be found at a steakhouse. No, the steak I’m talking about is Peter X. Kelly’s Cowboy Rib Eye and it can’t be had in New York City, Vegas or South Beach, only right here at Xaviars X2O in Yonkers and Restaurant X in Congers. 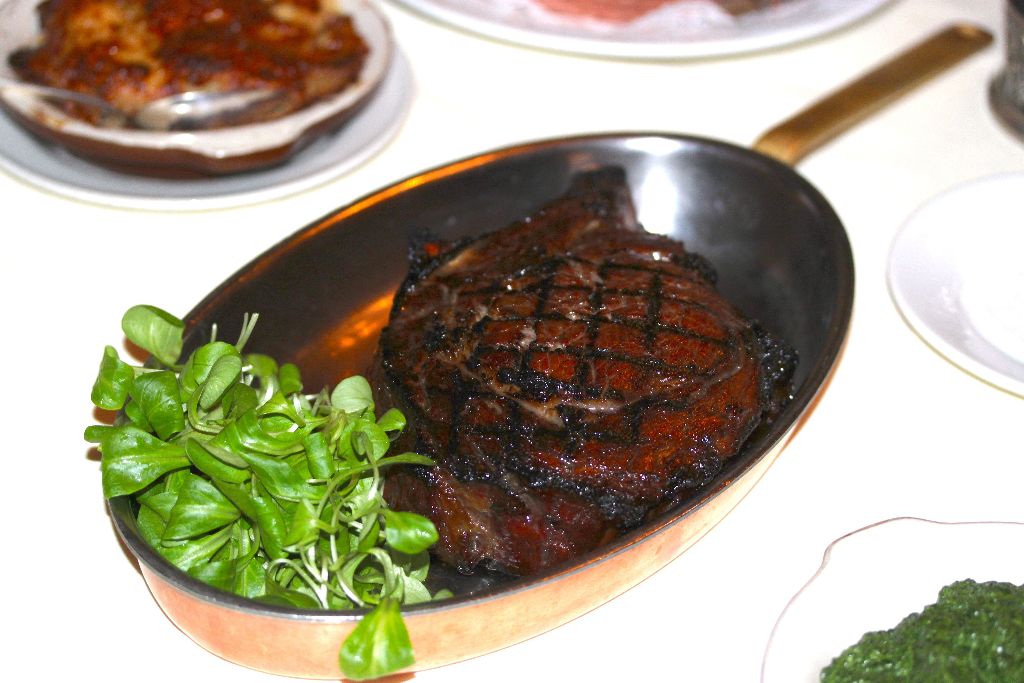 First, some history for those unfamiliar. Peter Kelly has been amazing Hudson Valley diners for thirty years, since opening his own restaurant at only 23 years old. Now the owner of four restaurants, Xaviars at Piermont, Freelance Cafe, Restaurant X, and Xaviars X2O, Chef Kelly has racked up a nearly unimaginable list of accomplishments and accolades: 29 out of 30 in Zagat, a rating of extraordinary in The New York Times and, in 2010, a James Beard Award nomination for Best Chef: Northeast.

Dining at one of his restaurants is an experience. There is attention to every detail about your meal. Indeed, the restaurants are a true extension of Chef Kelly himself. To meet him is to find a warm and gracious man in whose company you always feel welcome. Given the ratings, it is easy to see he is an accomplished chef, but just as importantly, he is a natural host who believes that it is always easier to satisfy a happy diner. He is a restaurateur who reminds that the root of the word restaurant is restore, and not just restoration of calories, vitamins and minerals, but restoration of spirit.  Every member of his staff that you interact will tend to be pleasant and attentive, ensuring that no negative experiences impede upon your enjoyment of the stellar food. 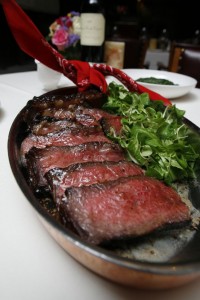 Accolades aside, what put Peter Kelly on the map nationally was his 2007 appearance on Iron Chef: America where he defeated Bobby Flay. With a grilled steak. Let us allow that to sink in for a moment. Chef Kelly beat a chef, famous worldwide for his grilling acumen, with a grilled steak. Specifically, his grilled Cowboy Rib Eye.

The Cowboy Rib Eye at X2O and Restaurant X is what you get when a hugely accomplished chef brings his talent and attention to detail to bear on steak. Aged anywhere from 28-35 days, the steak itself is a gorgeous, bone-in behemoth. It is rubbed with a combination of brown sugar, cayenne, salt and cracked black pepper, then left to marinate for two days. The result, after a pass under a 900 degree steakhouse broiler, is a beautifully charred exterior with a hint of heat and a slight sweetness to balance the smoky flavor from the char.

Initially presented whole before being whisked away for carving, it returns to you glistening and inviting, the interior ruby red but firm, the way only dry aged steak does. One bite and you immediately taste the bold beefiness of a well marbled, dry aged steak, but also the subtlety of the the spice rub. There is another factor that sets this steak apart. Every steakhouse seems to have branded their own line of steak sauces which accompany your selection. Chef Kelly practices Contemporary American cuisine, pulling inspiration and techniques from many of the world’s cuisines. Many of his dishes possess a French flair. His Cowboy Rib Eye is served with a classic Bearnaise sauce, the sweetness of fresh tarragon and tang of vinegar help create a rich sauce which perfectly compliments both the meat and its crust.

I began this story by discussing the link between steakhouses and luxury, and for good reason. The Cowboy Rib Eye served at X2O and Restaurant X is, indeed, luxurious. The steak, juicy, kissed by smoke and awash in creamy Bearnaise sauce needs to be as bold and assertive as it is because the side dishes accompanying it are stunning. 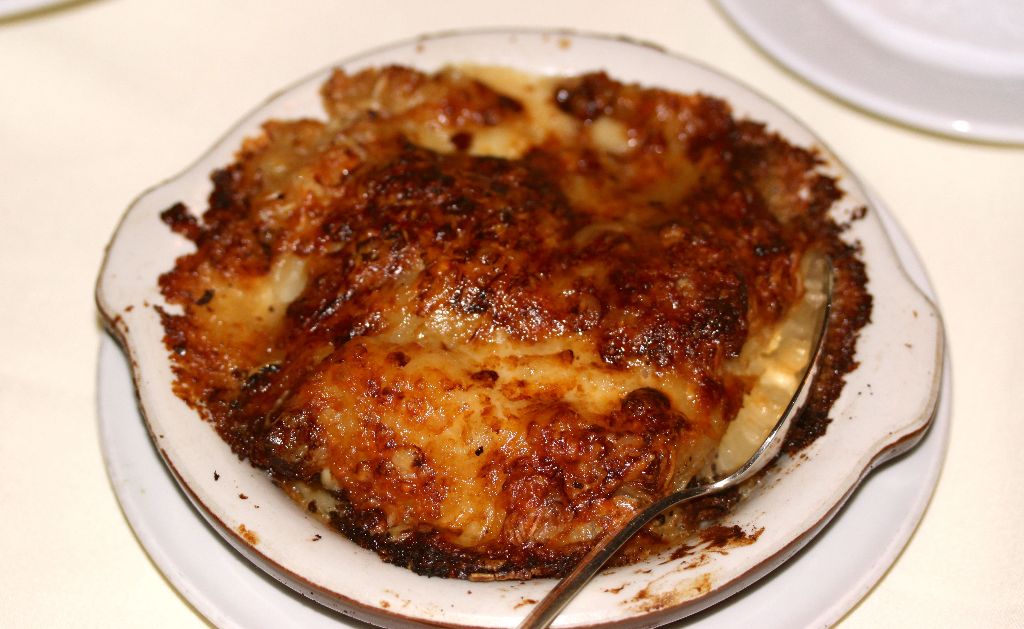 The steakhouse standard creamed spinach is there and just as comforting and satisfying  as mentioned, but there are no mere home fries here. Instead, the classic American accompaniment also gets a bit of French treatment (no, not French fries) in the form of Gratin potatoes. Covered in blistering Gruyere cheese, the aroma hits you like the world’s most delightful freight train. You’re there for steak but man, oh man do you want to dive right into the potatoes. I wanted to maintain manners (and also some sense of dignity), but still came close to hoarding that dish. 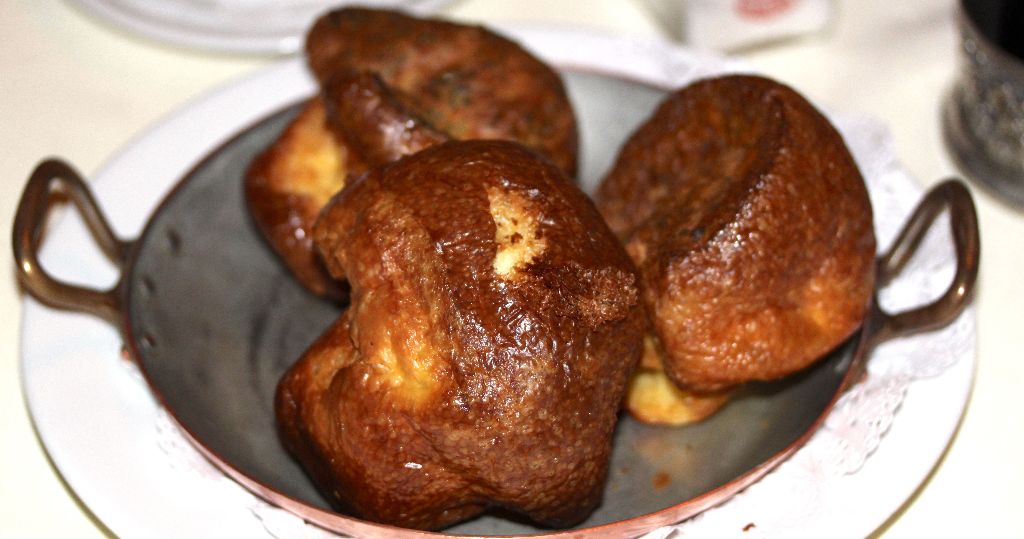 Bread comes in the form of three softball sized popovers. On the exterior is a buttery, crackly crust that could make a croissant cry tears of envy. Ripping one open will lead to ethereally light wisps of sweet, soft bread and a pocket of warm air that was the very essence of fresh baked bread. Though intimidating in size, these popovers are so light and airy that you will be in no danger of filling up on bread even though you will desperately want to.

Successful chefs know the mixed blessing and curse of being forever linked to a classic dish. David Chang’s Pork Buns, Wolfgang Puck’s Smoked Salmon Pizza and Thomas Keller’s Oysters and Pearls, ask them about these dishes and they may roll their eyes with a “Oh, that again” look on their faces. But they also recognize that these are the dishes that made them famous and wildly successful. So it may be that Peter Kelly is linked to his Iron Chef toppling Cowboy Rib Eye. I know that if I were linked to something so eminently satisfying as that dish I would consider myself successful indeed. It’s a classic 914 Eat!

*Cue the yelling and screaming. Proclaiming a “best” in something that people feel as passionate about as steak is just begging for abuse. Bring it on, I can take it.