People are reading
You are at:Home»Cooking»8 Great Things to Make in the Kitchen During a Snowstorm

When the snow is coming down hard outside, there’s nothing like puttering around in a warm kitchen, taking the time to prepare something from scratch. Here are 8 of my favorite ways to pass a storm in front of the stove. 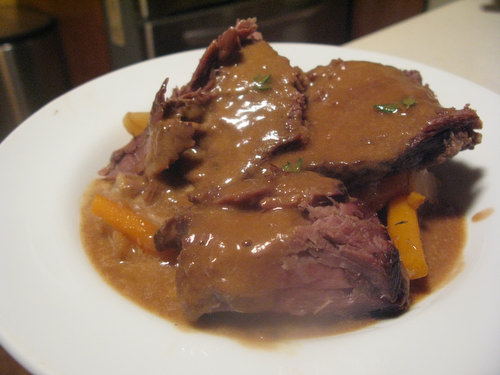 1. Brew a pot of French press coffee. Bring a pot of water to a boil and grind coffee. Into the pot, measure 1 tablespoon of grinds for each cup (that’s 8 tablespoons for an 8-cup press, the most common size). After the water comes to a boil, let it sit for about a minute. (The optimum temperature is just below boiling.) Pour water over the grinds to open them up and let them “bloom,” but don’t fill the pot. After a minute, stir the grinds and the coffee, then fill the pot with water. Place the press on top to keep the coffee hot. Wait four minutes, then slowly plunge the press into the pot. Serve immediately or keep warm in a thermos. Feeling frisky? Add a teaspoon of drinking chocolate to your cup before you pour the coffee. Presto: Mocha.

2. Make steel-cut oatmeal. Get 4 cups of water boiling. Then measure out a cup of oats and add flavors. Cinnamon is nice. Ground cardamom is fun. How about dried currants? Stir the oatmeal into the boiling water. Keep stirring until it thickens and starts turning smooth. Then simmer it for a half hour. Stir once in a while. Once it’s done, add whatever you like. Slices of apple and pear are terrific.

3. Candy bacon for a crowd. If you’re cooking for a crowd (or just love bacon, and let’s face it, who doesn’t?), you’ll want to make bacon on a sheet pan fitted with a rack. Just spread the slices over the rack and cook for 20 minutes at 400. To make it even more special, sprinkle a generous amount of brown sugar and black pepper on top before you cook it.

4. Use the slow cooker. There are tons of ideas out there in Internet-land, so here are just a few of my favorites: The pot roast from Cook’s Illustrated; Slow-Cooked Chicken with Tomatillos, Potatoes, Jalapeños and Fresh Herbs from Rick Bayless; Braised Brisket by Joan Nathan. (Just Google; you’ll find them.)

5. Make a pot of stock. Nothing warms the house like a pot of chicken (or vegetable) stock bubbling away on the stove. You don’t need a recipe: just cut up some onions, celery, carrots, shallots, garlic or whatever else you have in the produce drawer. Throw it in a pot with some chicken (or, if you’re going vegetarian, fennel is nice). Cover with water, add some black peppercorns and parsley and bring to a boil. Turn it down and simmer for a few hours. Take the solids out with tongs, then take advantage of the cold weather and put the pot out on the porch. The fat will rise to the top and you can scrape it off with a knife.

6. Make soup! Now that you have stock, you can make a super-tasty soup. Chicken-noodle is great for a storm (and an even better choice if you’re feeling under the weather). A fun project for a snow day is Pozole, a Mexican soup made with hominy. Or make a white bean-sausage-kale soup and sprinkle some Parmesan cheese over the top. Yum.

7. Make Mexican hot chocolate. Pick up a box of Mexican chocolate (Abeula is good) while you’re running your last-minute errands. Use one (3-ounce) disc for each four cups of milk. Bring both to a boil and whisk constantly until the chocolate dissolves. Sip and swoon.

8. Pop your own popcorn. Get out a big stock pot — heavy bottomed, about 8 quarts. Put it on the stove on medium-high heat and glug about 2 to 3 tablespoons of grapeseed oil in the bottom. Throw 4 to 5 kernels of corn in there and close the lid. Listen carefully. Pop! You’ll hear one of them hit the lid. Wait until all pop, then pour in enough kernels to cover the bottom of the pan, about 1 cup. Give the pot a big swirl and set it back down on the burner. Start listening as the kernels pop faster and faster. About every minute or so, give them another swirl. After about 4 to 5 minutes, give them one big swirl and start listening very carefully. Watch your clock. As they start to slow down popping, take note every five seconds. Once you get only on or two pops, it’s time to give it one last swirl. Pull that baby off the burner and dump into a big bowl. Salt to taste. Condiments to enjoy: Butter, Hot sauce, Parmesan cheese, Truffle oil.