It’s Valentine’s Day. I’m single this year and didn’t really think about what a romantic vegan dinner for two might be, but I don’t really see why you couldn’t serve marinara sauce (except that you probably already ate dinner by now). In fact, I had some today, and I totally could have cooked for two. And it’s even red!

It happens that the current cover photo on my Picky VeganFacebook page is a picture of spaghetti and “meatballs” with a slow cooker marinara. It’s been there for probably a year or so, but I got a couple of comments on the picture in the last few days, with one person wanting to know what it was and how to make it. Now, I’ll give you the sauce recipe below, but I’ve never really successfully made vegan meatballs- mine always come out too soft. It happens that Trader Joe’s makes a really good vegan meatball, so this is one of those times where I say go with store-bought.

Of course, someone else chimed in on the comments, and said she looked on the TJ’s website list of vegan products and couldn’t find them, implying that perhaps I wasn’t as vegan as I claimed to be (at least that’s how I interpreted it). I was able to find them on both the HTML and PDF versions of the lists and am not really sure why she couldn’t, but it does bring up an interesting point about Trader Joe’s- their products vary from region to region. A couple of years ago, I started reading about TJ’s peanut flour in several vegan blogs- but it turned out it wasn’t available here. It did eventually make its way here, and I did buy a bag, but then it was discontinued. That does happen at Trader Joe’s.

So, you know all about Trader Joe’s, right? There are three locations in Westchester, in Hartsdale, Scarsdale and Larchmont (out of the LoHud area, but there’s also one in Danbury, CT that might be more convenient for some). I know for some of you, a trip to one of those locations would be out of the way, but if you’re going to be near one anyway and like vegan-friendly food, it’s worth checking out. One of the nicest things about Trader Joe’s is that vegan products (for the most part) are clearly marked. They’ll have a “V” somewhere on the package (if it’s a Trader Joe’s label). 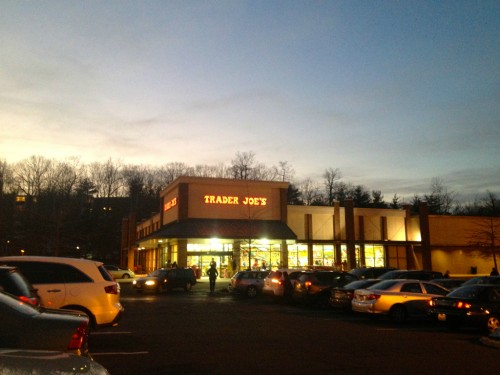 Trader Joe’s in Hartsdale, where I stopped after work tonight.

Of course, I did get a little paranoid after that picture comment, so I checked the package in my freezer when I got home- and that “V” made me feel a lot better. Cause they’re tasty enough that they may well fool a meat eater- and I don’t say that about much.

On a side note: the last meat product that I ever ate was meatballs. Before I had gone vegetarian, I hadn’t been eating very much in terms of meat, though I had had “fancy” meat the week before for Christmas (I went Vegetarian for New Year’s 2004, and vegan a little over 3 years later). I was at a New Year’s Eve party, and saw that there was a pot of meatballs in sauce as one of the appetizers. I figured since it was my last night before going veg, I might as well have some. They were awful. I thought right then and there “this is not going to be hard to give up.” And it wasn’t.

My marinara is a little different each time I make it. I also sometimes make it with canned tomatoes and sometimes with fresh (pureed) tomatoes- either will work. You can add tomato paste as needed to thicken it up, and you can toss in whatever else you like- sun dried tomatoes are an especially nice addition, as are roasted red peppers. Use whatever you have on hand!

This also smells divine when you walk through the door and come home to it. Warning: if you live in an apartment, your neighbors might get jealous! 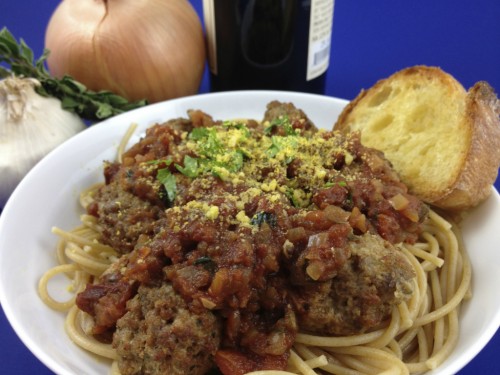