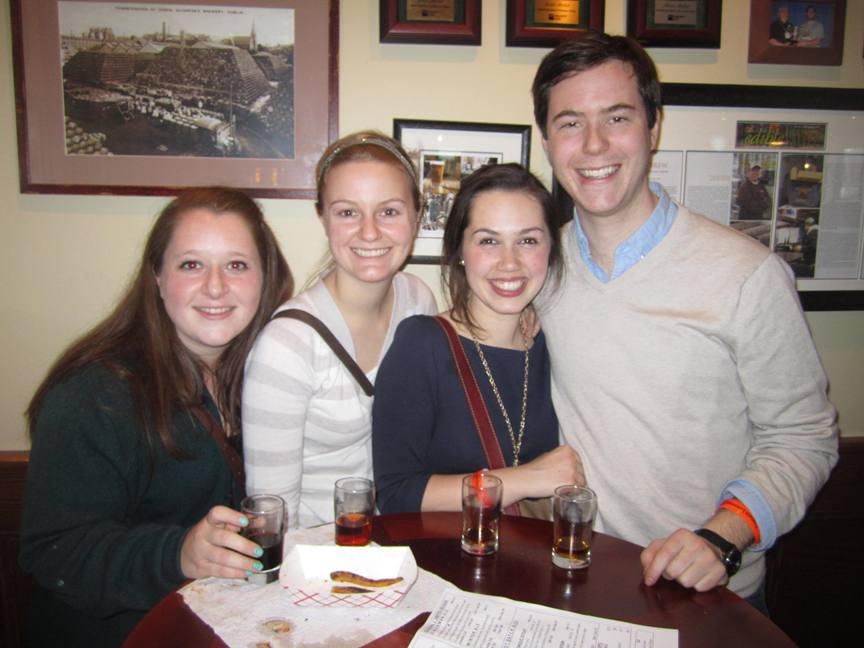 It was a historic day in the Captain Lawrence tasting room—the first Sunday in brewery history in which the tasting room is open for business. In other words, whatever your Sunday routine involves—be it sleeping in, brunch, worship, cleaning, lamenting the pending work week, or all of the above–you can now add sampling craft brew at Captain Lawrence to the list.

One could tell it was a special day by some of the names in the tasting room, including Jeremy and Becky Beers of Milford, Connecticut. (The “Who’s On First?” opportunities announce themselves immediately upon meeting the Beers’s: Up for a couple Beers tonight? Sure! Are those Beck’s beers? No, she’s drinking Captain Lawrence!)

Jeremy is feeling on top of the world, and Becky is simply happy to have her husband back on terra firma. See, he’s fresh off his first-ever helicopter pilot mission—a Groupon offer he took advantage of that allowed him to fly a helicopter out of Westchester Airport…with a seasoned co-pilot with overruling privileges seated next to him, like you had in driver’s ed.

“I figured, it was an experience I may never get to do again,” Jeremy says.

Trekking in from Connecticut, Becky and Jeremy scoped out some other things to do in the area after the chopper excursion, and saw the brewery was open. Becky is enjoying the Chocoholic Stout (“Not to chocolatey, a nice balance,” she says), while Jeremy, a home brewer, enjoys the Winter Ale. “It’s a real nice malty beer with a small hint of spice,” he says. “How it should be.” 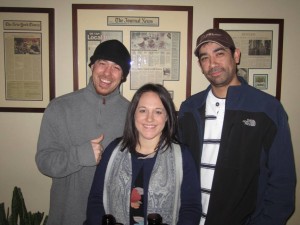 Across the room, Mike Rubino of Washington, DC and Joanna Berry of Nyack will have to wait to practice their landings for another day. The two were to ski in the Poconos, until Nyack pals Amy Cymore and Allie Greenberg coerced them into spending Sunday at the brewery. “We’ll leave late,” says Joanna with a smile as she sips the mysteriously titled Vienna lager known as The Implication. “We’ll ski tomorrow.”

The group is enjoying lamb merguez hot dogs and mac & cheese from Village Dog with their brews. “This was on our agenda for Saturday,” says Amy as she tastes a Brown Ale. “I mean Sunday.”

Hanging around another barrel, the Ossining trio of Adam Lawrence (no relation to the Captain), Stephanie Noll and Jose Cano are enjoying a “lazy Sunday,” as Stephanie puts it. The crew has been meeting up at the brewery on Saturdays dating back to its Pleasantville days, and appreciates having an extra weekend day to choose from. “It’s a good development,” says Adam.

“It’s always good to enjoy a couple beers, and fill up the growlers,” Adam says. 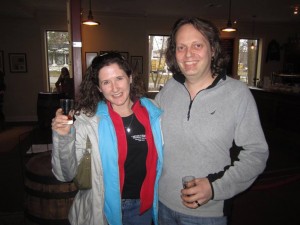 Elsewhere in the brewery, Suzi and Jason Tipa of Millwood needed to get out of the house after a stressful day of booking a vacation to London, which will include a side trip to Dublin—including the Guinness brewery, the Jameson distillery and Trinity College to check out a very old book. Photographed for Notes From the Tasting Room Vol. 6 (“Barley and the Chocolate Factory”) at Captain Lawrence in a Guinness t-shirt, Jason promises to redeem himself by rocking a Captain Lawrence T in the Guinness tasting room. Suzi, a dance instructor, usually works Saturdays, but saw a curious development on the Captain Lawrence website earlier in the week: Starting Feb. 24, her favorite brewery was open on Sundays.

After a quick trip to Home Depot in Hawthorne, Suzi and Jason were faced with a Choose Your Own Adventure-worthy dilemma.

“It was left to go home, or right to Captain Lawrence,” she says with a smile. “We figured, we might as well make sure the website was right.”