People are reading
You are at:Home»Columns»Foodies 101: Cooking Outside of the Pizza Box!

Hello all!  This is Kevin Ellis of the husband and wife blogging team: Foodies 101.  I hate to say it, but we have been in a bit of a cooking funk lately.  My wife Aimee tried and failed at replicating a grapefruit sorbet we had recently during a trip to BECCO Restaurant in NYC.  She was pretty miserable after that and she has since been boycotting the kitchen.   I decided to step up and attempt to make something that we had eaten at a wonderful Small Bites Blogger’s dinner at Bellota at 42 in White Plains about a month ago.  It was a grilled flatbread pizza with cheese, mustard greens,  white truffle oil and a poached egg on top …we loved every bite!  I really wanted to try to recreate the dish but I wasn’t sure of the cheeses that were used.  Aimee, using her top-notch internet researching skills figured it to be Manchego cheese which hails from Spain and is made from sheeps milk.   Since we had such a religious experience with Truffle oil that night, I decided to run to the store to find the Manchego cheese and some pizza dough from the deli section of the supermarket and make it for dinner last nite.

Aimee is the creative cook, whereas I like to follow a recipe so I am almost guaranteed to enjoy what I make.  But this time, I was trying to not only think outside the box, but cook outside the box as well.  The PIZZA box that is!  We love pizza.  But what we had at Bellota was still so fresh on our tongues and I was so excited to give this a try – recipe or not.  I was still stumped on how to make the tasty flatbread pizza and have it come out somewhat similar to the Tapas version from Bellota.   When I got home with the ingredients,  I immediately oiled a metal bowl and placed the dough inside and covered it with a dish towel.  I placed it in a warm area of my kitchen until I was ready to use it.  After a few hours, I took the dough and turned it out onto a floured surface.  I pre-heated the oven to 425 and then rolled the dough out until it was very thin and placed it on a baking sheet  sprayed with non-stick spray.  I put the dough in the oven for 5-7 minutes to see if it would brown up a bit.  It was pouring outside and not to mention chilly!  I knew I couldn’t grill the dough, but I was trying to match the grilled effect by making it crispy on the bottom.   While that was in the oven I grated the small brick of Manchego and mixed it with a handful of mozzarella because it wasn’t quite enough to cover the pizza.  My wife thinks I’m too heavy handed when it comes to herbs and spices so she was very specific: a pinch of Thyme, a pinch of white pepper, 2 pinches of Italian seasoning and a pinch of garlic powder.

When I pulled the pizza out of the oven it looked amazing!  Beautiful with brown bubbly cheese and nice and crispy underneath, just how we like it.  I took the white truffle oil and drizzled it sparingly over the top and cut it into little squares with the pizza cutter.  White truffle oil is very strong and trust me when I say a little goes a long way.  Aimee and I were excited to taste it.

After the first bite, we were in heaven and our tongues had found what they had been craving since that day at Bellota!  We will be making this again very soon for a picky-food party at a friends house in a few weeks.   Although the ingredients are a bit expensive, (White truffle oil was $8.99/bottle at DeCicco’s and the Manchego cheese was $5.99 at Hannafords) this is definitely something we will want to have at least once a month going forward. 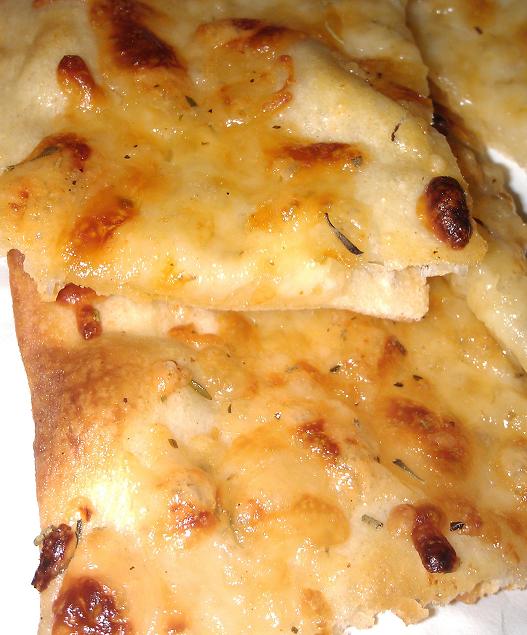 We hope you will try this sometime yourself and enjoy it just as much!