People are reading
You are at:Home»Cooking»CIA Recipe: New Role for Cabbage on St. Patrick’s Day 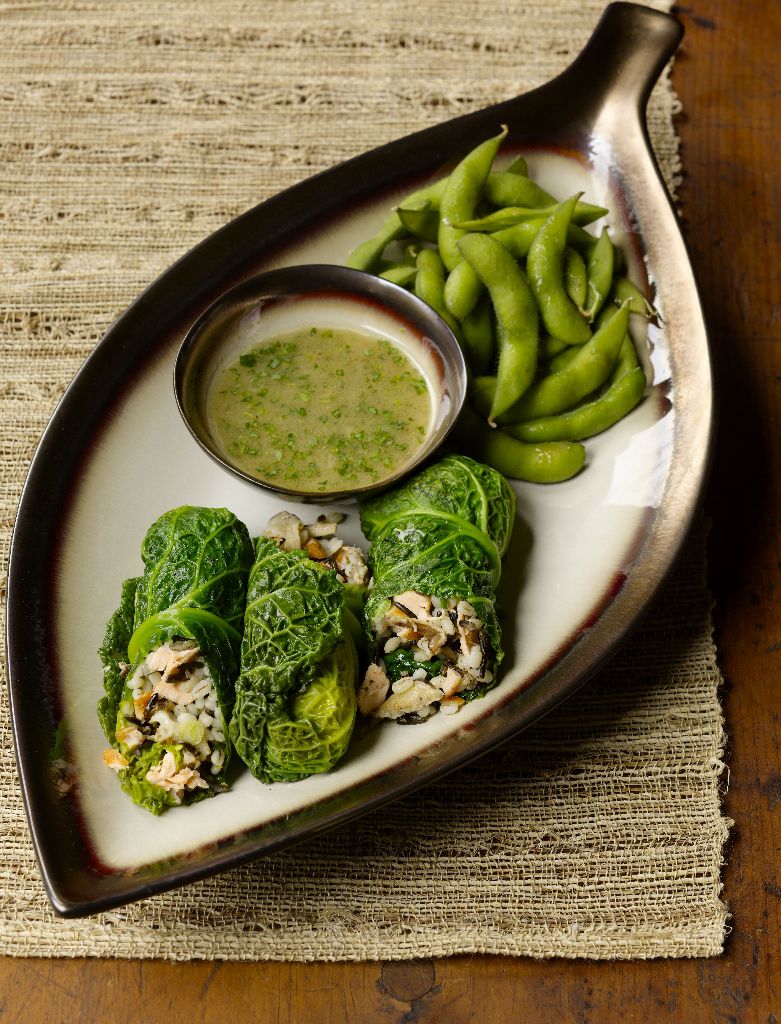 Fresh cabbage is widely available in March, and it’s a good thing since so many of us enjoy it with corned beef on St. Patrick’s Day! Cabbage is from the Brassica family, which also includes cauliflower, broccoli, and Brussels sprouts. You’ll find it in all shapes, sizes, and textures—common varieties are green cabbage (sometimes referred to as white), red cabbage, the crinkly and crisper savoy cabbage, and the napa, which forms more into a tall stalk or barrel than a tight ball.

There are many ways to enjoy this healthy vegetable. The faculty at The Culinary Institute of America (CIA) suggests a delicious heart-healthy and diabetes-friendly variation on a traditional stuffed cabbage with salmon and wild rice.

“I serve the stuffed cabbage rolls with steamed edamame and a tarragon dipping sauce, to make a meal high in protein, fiber, and flavor while low in saturated fat, and without a fishy aftertaste,” says Registered Dietitian and CIA Associate Professor Jennifer Stack. “I designed this recipe for people like me, who are not fond of fish but want the health benefits it provides. These stuffed cabbage rolls look so good and are so tasty, they tempt even non-seafood lovers.”

Edamame are fresh green soy beans in their pods. They are popular in Asia, particularly in Japan where they are served as a snack. Introduce them to family and friends as a fun finger food. “They can become rather addictive when dipped in a tarragon sauce,” Stack says. Dip the bean in the sauce and then put the whole pod in your mouth. While holding on to the end of the pod, gently pull the pod through your teeth and the beans will pop out in your mouth. Discard the pod and move onto the next one.

A good time-saving practice for this recipe and other dishes like this one is to keep some wild rice handy and cooked barley in small portions in the freezer to just grab and use. You can also substitute rinsed, canned salmon in place of fresh salmon if you don’t have the chance to get to a fish market.

The following recipes are from Jennifer Stack’s new book, the CIA’s The Diabetes-Friendly Kitchen (Wiley, 2012), available for purchase at bookstores nationwide or at www.ciaprochef.com/fbi/books.html.

For a brief step-by-step video showing CIA Chef Jennifer Stack demonstrate how to prepare Salmon and Wild Rice-Stuffed Cabbage, visit our Culinary Intelligence recipe blog or check out the video below:

Preheat the oven to 350 degrees F.

Add enough water to the reserved mushroom liquid to make 1 cup. Add 1/8 teaspoon of the salt and bring it to a boil. Stir in the barley and reduce the heat to a simmer. Cover and cook until the barley is soft, about 25 minutes.

Stir the chopped soaked mushrooms into the barley. Mix the cooked barley with the wild rice and set aside.

Heat the olive oil in a heavy skillet over medium-high heat. Season the salmon fillet with 1/8 teaspoon each of salt and pepper. Sear the salmon fillet just until cooked, about 2 minutes per side. Remove the skin from the salmon if still on and flake the fish into the barley mixture. Brown the fresh mushrooms in the same pan. Remove the mushrooms and deglaze the pan with ¼ cup of the wine.

Add the skillet liquids and mushrooms to the barley mixture. Add the green onions, tarragon, the remaining ½ teaspoon salt, pepper, and the lemon zest.

Fill the cabbage leaves with the barley mixture and roll the leaves up tightly. Place the rolls seam side down in a baking dish.

Bring the chicken broth and the remaining ¼ cup wine to a boil and pour over the cabbage rolls. Cover with foil and bake until cabbage is soft and the broth is steaming, 20 to 25 minutes.

Bring the water to a boil and add the salt.

Boil the edamame until beans are tender, 4 to 5 minutes. Drain and serve with the dipping sauce.

Dissolve the arrowroot in 1 tablespoon of the chicken broth to make a paste. Bring the remaining broth to a boil.

Stir the paste into the broth and allow the broth to thicken slightly. Remove from the heat and add the vinegar, mustard, salt, pepper, tarragon, shallot, and garlic.

Whisk in the olive oil.