People are reading
You are at:Home»Columns»Notes From the Captain Lawrence Tasting Room, Vol. 52 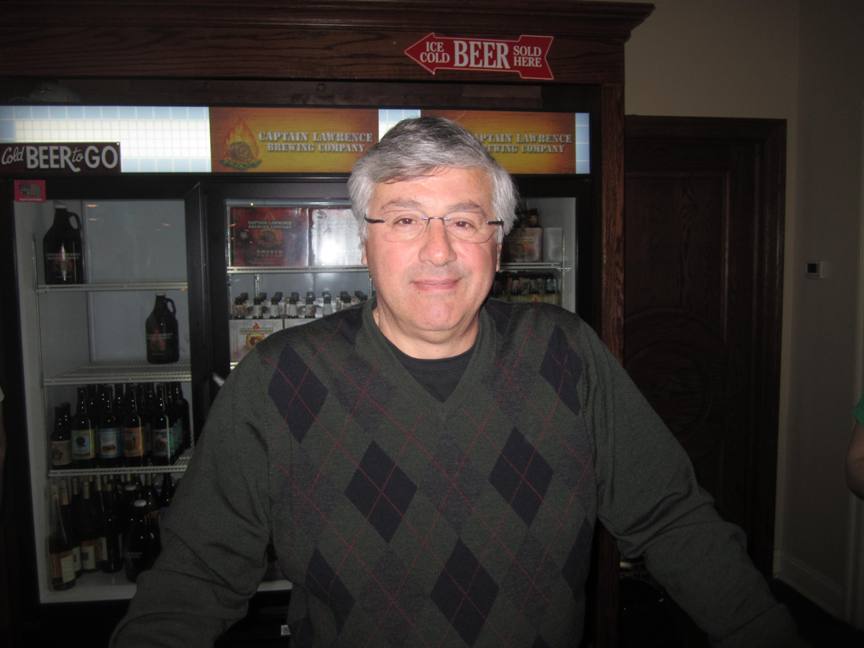 Captain Lawrence has grown at breakneck pace, so it’s only fitting that the brewery’s logo appears on a race car careening around courses up and down the East Coast these days. While Captain Lawrence also sponsors lacrosse teams (see Notes From the Tasting Room, Vol. 25) and disc golf squads, the brewery’s support of a competitive vintage race car is unique—partially because the hot rod is piloted by Vince Vaccaro, father of brewery founder Scott.

Vince—the inspiration behind the brewery’s beloved Belgian-style ale St. Vincent’s Dubbel–is quick to point out that no one is mistaking SVRA for NASCAR. Nobody is trading paint, or banking prize money, or moping after a loss. “While it’s very competitive wheel to wheel racing, it’s a lot of guys having fun,” he says. “It’s good friends and camaraderie.” 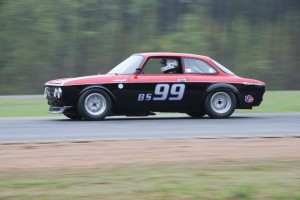 The racer bearing the familiar Captain Lawrence Brewing blazing keg is a 1972 Alfa Romeo GTV 2000, which hits a top speed of around 130 mph. It’s got a 2L engine and twin Weber 45s (I honestly have no idea what that means), cranks out around 200 horsepower and has a five-speed transmission. Like former Jet Mark Gastineau, The Great Wayne Gretzky and secret agent Maxwell Smart’s sexy counterpart before it, the Alfa Romeo sports #99.

While NASCAR races take place on oval tracks—one unending left turn, to those who don’t exactly embrace the sport—SVRA vintage races are on twisting, turning, elevating and descending road courses that range from 1.5 to around 3.7 miles. Other events this season include races at Watkins Glen, NY, New Jersey Motorsports Park in Millville, NJ and Lime Rock Park in Connecticut.

While NASCAR’s bumping and scraping is legendary, contact is intensely frowned upon in Vintage Racing Association derbies. Overly aggressive driving that results in a crash sees the offender booted off the track for the weekend. Vince likens it to a non-contact amateur sports league—intense competition, a few beers and stories afterwards.

Vince is a familiar face around the brewery, handling the books and providing unofficial quality control on the Freshchester Pale Ale and other beers. It’s a quiet Thursday afternoon in the tasting room, Led Zeppelin’s “Babe I’m Gonna Leave You” on the house system, the CL boys cranking out more and more beer in the back. Vince sips a smoked porter; his face lights up when discussing his hobby. “I grew up around race cars,” he says. “It’s something I always wanted to do.”

Vince took second place in his class at Sebring, but is quick to make light of his accomplishment. Perhaps his greater contribution to the circuit is the beer he brings for post-race camaraderie building. While most of his colleagues pine for the Captain’s Reserve Imperial IPA, he says the water weight lost during racing—it can be five pounds—makes the Pale Ale his bev of choice.

“Quite a few of guys know about the brewery,” he says. “They wait for me to come along with beer—I’m a very popular guy.”

The CLB Racing branding appears in the car’s front fender and on the side of the trailer hauling the Alfa Romeo to the next race. One truck driver on I-95 in North Carolina offered an emphatic thumbs-up that signaled a familiarity with Captain Lawrence. When the rig pulled ahead, his New York plate was visible. “I had a laugh at that,” Vince says.

Across the room, Scott tastes a new batch of the Rosso E Marrone sour ale, and appears pleased with the concoction. He’s amused with Dad’s weekend pursuits as well.

“Whatever makes him happy,” Scott says with a smile.