People are reading
You are at:Home»Columns»Hudson Valley Restaurant Week 2013: The Beehive in Armonk, a little gem off the beaten path.

With my friend Shari I ventured to The Beehive, in Armonk, for Restaurant Week. I’ve been to Armonk many times with my husband for dinner, but strangely never there. The Beehive is located only about a half mile from Main Street, on Old Route 22. I noticed it on the HVRW list and thought it would be the perfect place to try. Shari’s company has an office in Armonk, and I’m just down the way in Port Chester. What a great call on my part! Beehive is truly a little gem off the beaten path. The main dining room has a cozy lodge feel with wood and high ceilings. I’m sure the snow falling outside helped me think that way as well.

We ended up going the night of that crazy 8 hour snow storm in Westchester. When we arrived only a few flurries and several hours later at least 6 inches of snow on our cars! The storm kept a few people away, but the upside for us was being able to really take our time, and along the way picking up a few Scavenger Hunt points!

Their HVRW menu had many great options, so we each got different dishes allowing us to try a great selection. We started out with the Eggplant Spread  topped with feta and served with seasoned pita. I may have mentioned this in a passing, I’m Greek and have had, and cooked, just about every Greek dish on the planet. So I’ve eaten eggplant spread before, many times, and I’m generally not a fan. However, this one was quite tasty. The smokiness really came through and the seasoning just right. The feta provided just the right amount of saltiness to compliment the overall flavor. Why no one ever does that is beyond me – it’s a genius combination! 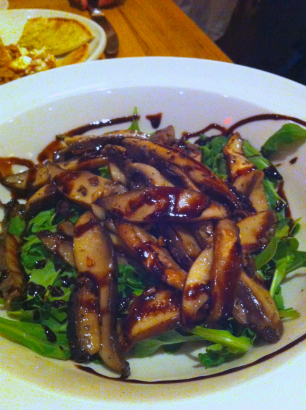 Our other appetizer was a simple Pan Roasted Portobello Mushroom Salad. I’m fond of saying in my cooking classes that there are some matches made in heaven when it comes to food, and you really should not mess with perfection. Case in point: portobello and balsamic. When you combine a portobello with a slightly reduced, and ultimately thick balsamic, you get that perfect match. The earthiness of the dense mushroom and sweetly acid vinegar makes it come alive. Topped over peppery arugula, it becomes the perfect dish! I also found out that one of the ingredients in the reduction is Catskill Mountain Honey.  (50 + 50 points!)

More after the jump … 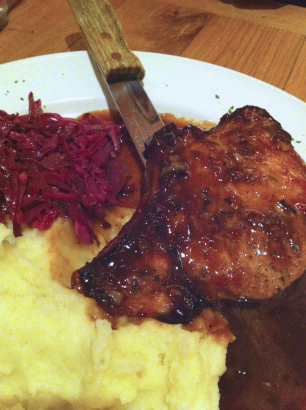 On to our main courses: we opted to go with fish and meat. Shari picked the Mongolian Double-cut Pork Chop with Yukon Gold Potato Puree and Honey Gingered Cabbage. The pork chop was juicy and tender, always a plus in my book. It was glazed with reduction of an Asian marinade, which worked very well. The fluffy potatoes were the perfect foil with the chop. (50 + 50 points for the honey again in this dish!) 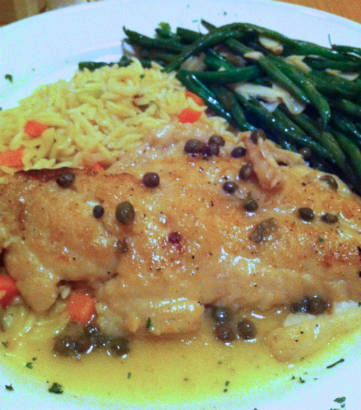 For me the dish of the night was my Snapper, piccata-style. This dish was a very best combination of Italian and Greek. The snapper was a whole filet, that had to have come from a 1 1/2-2 lb fish. It was gigantic, and bathed in a most divine butter, wine and caper sauce. Sweet, salty and acidic over the tender white fish. The sides were as Greek as you get: Orzo Pilaf and Haricot Verts. Well, the basic green bean would have been Greek – but I was happy to see the haricots, stepping it up. Crisp tender and tossed simply with olive oil. You can’t go wrong with either in my book!

It’s a family affair at the The Beehive, with Anne (front of the house) and Peter Modroukas (Executive Chef) running the restaurant and their children executing all of this deliciousness. Dean (Chef de Cuisine) heads up the savory side of the kitchen, and his sister handling the sweet side. Valerie, the Pastry Chef, had the final plates knocked our socks off too. 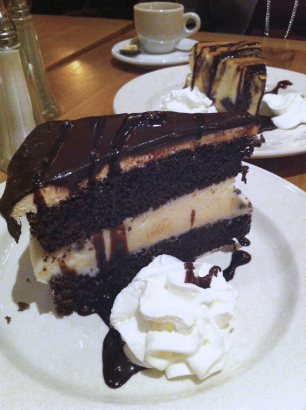 We chose the Chocolate Cheese Cake and the Cannoli Cake for dessert. The cheese cake was creamy and dense, a perfect balance of flavor and texture; but the cannoli cake was just luscious. The cake part was a moist devils food and the cannoli part, made with fresh ricotta, utterly divine. The bittersweet ganache balanced the overall flavor. My only suggestion would be to just leave the whipped cream off. Not really necessary as both of these lovely creations can stand on their own! 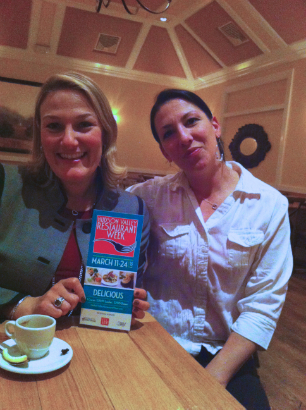 It was a fun night, of course until we had to drive home in the snow! Our server Jana was wonderful, filling us in on the many dishes and giving us great information. (100 + 50 points ) Anne even popped over to say hi and thank us for braving the snow. It was so worth it .. Shari and I had a great time catching up, and finding a new spot. In a few weeks they will have their Greek Easter (on May 5 this year) menu posted. If you’ve never done Easter Greek-style, now is the time to try. In the meantime, get yourself to The Beehive, you won’t regret it!