People are reading
You are at:Home»Columns»Notes From the Captain Lawrence Tasting Room, Vol. 54

The calendar has been insisting it’s spring, and finally there was another indicator of the season on the last weekend of March—people hanging out on the back patio at Captain Lawrence Brewing, sampling craft beer, tossing the bocce balls, and thinking about the warm months ahead.

For one party of six from the historic Battle Hill neighborhood in White Plains (“the wrong side of the tracks,” jokes one), it’s a full-on class trip; Dwight Straub assures us that everyone in their party had their permission slips signed. He’s sipping the Smoked Porter, which he deems to be a fitting choice just hours before a giant bunny was set to hop through Westchester, break into our homes, and leave sugary sweets for the kiddies and the mice.

A friend of the Battle Hill gang had actually given up beer for Lent; not surprisingly, he didn’t make the trip today. “He may have been incarcerated,” quips Mike Hritz of their pal’s decision to lay off the beer. 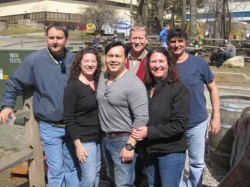 Frank Vieni is quaffing the Brown Ale. He recently brewed his own batch of a Belgian beer he called Ballpark Red for the baseball season, though it was gone before Opening Day. Dwight’s wife Adrienne is enjoying a Kolsch.

“I’m actually not a beer drinker,” she says, bringing an awkward silence to the patio. It’s punctuated by the sound of dogs barking; there are a high number of them on site today, which the Battle Hill boys think may be related to the inviting fire hydrant smack in the middle of the patio.

Everyone—two legs or four–is digging the warmest day of the year. “The crocuses came through on our front lawn for the first time,” says Dwight. “It inspired us to come here and enjoy the great outdoors.” 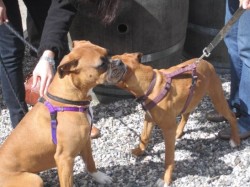 The blessed weather has compelled Julie Vanderlee to make the trek from Chester in Orange County. She’s been visiting Captain Lawrence since well before its Elmsford days, selling nuts at the Pleasantville farmer’s market down the road from the brewery’s original locale. Julie’s brought some nuts for the boys behind the bar, and is simply enjoying a quiet moment in the sun with a cup of craft beer. “I went with the Kolsch because it’s a beautiful, sunny day,” she says. “My eagerness about spring led to my taste in beer today.”

Also saying hello to the boys at the bar—and venturing from the northlands, for that matter—are George and Liz Okon of Hopewell Junction. They’re friends with the father of Justin Perrone behind the bar, who’s due in the tasting room at any moment. The Okons are marking their first trip to Captain Lawrence with a couple Kolsches. Thoughts are drifting to summer barbecues; George is eager to take his new smoker for a test run. “Ribs, salmon, trout, wild turkey—not the stuff you drink,” he says. “You’re invited.” 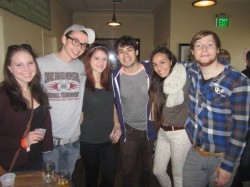 Across the room, a gaggle of pals from their days growing up in Harrison is relaxing after some hardcore bocce. The guys beat the girls, 8 games to 1. A rematch may follow. Sampling the Winter Ale, Celeste Hofland of West Harrison is taking advantage of the final weekend before a new pricing setup goes into effect at CL.

“Free is a good incentive to try different beers,” she says.

Next up for Celeste: the Ginger Man Ale.

The line for samples is short. The Brian Setzer Orchestra’s retro swing cranks out of the speakers. Author Steven Derosa is discussing Hitchcock with his dog Bogey. The mood is upbeat, despite the fact that someone has parked in the Budget Rental lot again.

Back on the patio, David Peretz is enjoying his good fortune. He’s up from Philly, visiting some old friends, who surprised him with a visit to the brewery. “I wanted to introduce him to something that’s up and coming,” says Steve Rosenberg of White Plains. “I liked the idea of taking the tour and sampling some beers, and the weather is great—I didn’t expect this.”

David sips a 12-ounce cup of the hoppy wheat beer Sun Block. He takes in his surroundings—the sun, the dogs, the buoyant crew from Battle Hill–and smiles. “What could be better?” he says.