People are reading
You are at:Home»Drinks»Beer»Notes From the Captain Lawrence Tasting Room, Vol. 55

The announcement was a quiet one, just four quick lines. But it sparked an outsize amount of activity.

The post hit Facebook at 1 p.m.: The Rosso E Marrone, Captain Lawrence’s brown ale fermented with grapes and aged in oak barrels, was available in the tasting room as of 4 p.m. Thursday. Just 250 cases–and when it’s gone, it’s gone.

For a certain segment of the population—dudes who truly love a nuanced, albeit not-for-everyone brew known as a sour ale—it was a call to action. Meetings were missed, workdays abruptly truncated and plans inexorably altered, as the fans of the Rosso scrambled to be at Captain Lawrence Brewing by 4.

Ryan Maguire drove down from Albany. He never misses the Captain Lawrence special bottle releases. His beer-trading buddies appreciate the Rosso E Marrone, adds Ryan, and—driving 270 miles round trip up and down I-87—he clearly does too. 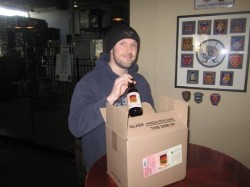 “Every time Captain Lawrence does sours,” Ryan says, “I gotta have it.”

In previous years, the brewery would announce the special bottles’ release date in advance, prompting diehards to camp in the parking lot the night before, like technophiles awaiting the new iPhone. To help everyone sleep a little better, Captain Lawrence decided to post the Rosso’s availability a few hours in advance, and let social media do its work.

Which it has. A little before 4 p.m., there are 20 people on line—19 guys and a woman. Alan is in front, having made the trip over the Hudson from Budd Lake, New Jersey. Like Ryan, he makes a point of attending every special release at Captain Lawrence, dating back to the Pleasantville days. Alan is with his friend Siobhan. He too mentions trading buddies, and plans to share the sour. 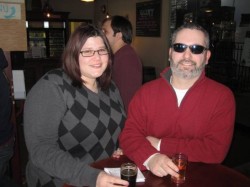 “I send them all over,” he says. “These will go to Texas, Washington State, California, Minnesota, Illinois. If they want to send something back, that’s great.”

The doors open at 4, and the pilgrims file in. It becomes evident that the gathering is more than just about buying beer—it’s about being part of an event. Jay from Poughkeepsie—several people we spoke to opted to leave out their last names, perhaps due to them ducking out of work early—is the first to get his hands on the Rosso. Jay fondly recalls the first Rosso release on Valentine’s Day in 2009.

“It was back before you had to sleep out,” he says. “A lot has changed since those years.”

His box of brew tucked under his arm, Jay is on to Peekskill Brewery to add to his craft beer stash, before hopping a train to Manhattan, where he’ll be the most sought after guy at a friend’s beer tasting party.

By 4:05, the retail line has swelled to 40 people; the female contingent has swelled to three. At $15 a pop, the 12.7 ounce bottles are not cheap. Six is the maximum, and everyone gets their six.

There’s a decidedly Grateful Dead concert vibe to the tasting room. Everyone seems to know each other from previous Captain Lawrence special releases, and is psyched to catch up and compare notes on newly discovered beers. They trade brews with faraway friends like Deadheads trade tapes of a particularly hot show. Like the old Dead tours, they blown off work to be here. 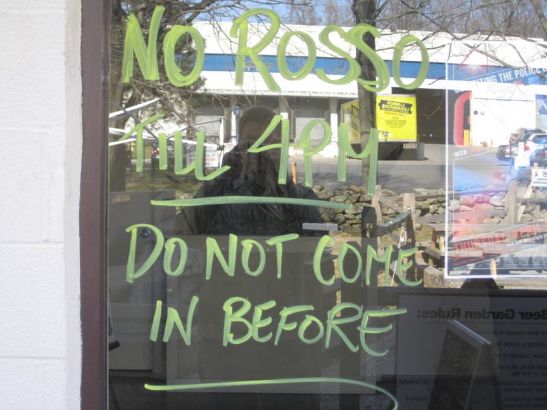 Dino Acquarelli of Brookfield, Connecticut did just that, but intends to follow through on plans to take clients to a Rangers game at the Garden in a few hours. But first, there are samples to enjoy. “A great quality local beer is nice to share with friends from different parts of the country,” he says, some of his schwag slated for Nashville, Chicago, California. “We’ll tailgate at a sports event or concert. They’ll bring cool stuff from their region, and I’ll bring some from mine.”

Like many in the tasting room, Dino has made a considerable effort to be here, has shelled out substantial scratch for the beers, and intends to give a bunch of them away.