People are reading
You are at:Home»Columns»Westchester Breakfast Club’s March Roundup!

The WBC bookended March with two contrasting breakfast experiences with one thing in common: restaurants with similar names. Well, maybe not that similar, but they sound alike to this writer. We started off the month with a Mexican morning meal at Vega in Hartsdale and ended the month on Easter with a traditional brunch at Nessa in Port Chester. 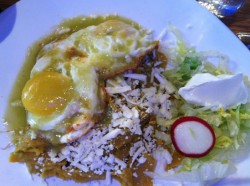 March 3: Vega is a relatively new Mexican restaurant on East Hartsdale Avenue, steps from the train station. It doesn’t strike you as a relaxing brunch destination. The interior décor is more suited for an evening of margaritas than the first meal of the day. The brunch menu has a variety of egg-based dishes, some sandwiches (think a Cubano and a steak sandwich), and breakfast burritos. The standout dish at this brunch was the Chilaquiles Verdes with two eggs, a traditional Mexican breakfast dish made up of eggs over easy, salsa, tortilla, and cheese. Several WBCers tried the chorizo omelette. While flavorful and
served with a generous portion of actual chorizo, the omelette was on the small side for the $13 price tag. And that’s a general issue at Vega. The brunch menu is overall reasonably priced, but the prices for many items on the regular menu seem far too steep for what you actually get.  The WBC has a hard time understanding why a basic chicken quesadilla costs an astounding
$15 at Vega while the same thing (at an arguably better quality) could be had at Tomatillo in Dobbs Ferry for just $10. Although we had a pleasant experience at Vega—capped off by some refreshing flan for dessert—we think that for brunch it’s worth it to spend your pennies elsewhere. 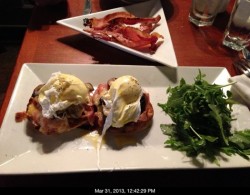 March 31: Nessa in Port Chester offered a special Easter brunch for $35: you get a cocktail, unlimited coffee or tea or juice, a salad, short ribs, and mousse for dessert. We’d love to tell you how this meal was, but the WBCers are on a budget, so everyone selected items from the regular brunch menu instead. The coffee hounds of the group were delighted that their brews were served with a side of frothed milk. Quite a treat! Sylvia and Reid went the sweet route for breakfast, choosing potato pancakes and battered cinnamon toast, respectively. I know what you’re all thinking: potato pancakes aren’t sweet. Oh, but these are.
Nessa’s potato pancakes aren’t your bubbe’s latkes. Instead, they’re traditional-looking breakfast pancakes filled with creamy potatoes, and served with spiced apples, whipped ricotta, and honey. All combined, it was delectable. The battered cinnamon toast was also delectable, and very plentiful. Reid suggests it’s a dish better-suited for sharing. Meanwhile, Jeff and Andrew
selected egg dishes: sunnyside-up eggs over pork hash for Jeff and porchetta poached eggs for Andrew. Both dishes were cooked perfectly and had a wonderful (and delicious!) balance between the eggs and the meat. The group’s only complaint (and it was unanimous) was that the interior was far too dark for a morning brunch. Everyone left blinking their eyes against the daylight after breakfast.