Hi everyone, Aimee Ellis of Foodies 101 here. Sorry it’s been so long.  Things have been a little hectic.  But without further ado, I bring to you a restaurant review on some very flavorful and fragrant Indian food, and the very delicious Chicken Tikka Masala!

My friend Nicole wanted to take me out for my birthday. She lives about an hour away so we were trying to figure out someplace at the halfway mark to meet.  Me being in Carmel and her in Hyde Park we decided on Route 9 in Fishkill.  The biggest issue now was to figure out which of the countless eateries to dine at.  She mentioned an Indian Restaurant on Main Street/Route 52 called Tanjore. At first I was skeptical because it had been so long since I’d been to an Indian Restaurant, easily 5 years ago.  But the the plan was made and the more I thought about it, the more excited I became!

We got there at almost exactly 6pm on a Monday night. The place was empty except for a few folks I who were there for take-out. We were seated and a friendly waiter came and filled our water glasses and gave us menus.  I had basically decided right off the bat to stick to what I knew, which was Chicken Tikka Masala.  Nicole wanted the same thing and we ordered a Vegetable Samosa appetizer which Nicole said was really delicious. We also asked for some garlic Nan.

Within 10 minutes or so our appetizer came out and Nicole went right for what we think is Tamarind sauce.  I have researched it a few times and can’t come up with any other possible answer, and of course I forgot to ask our waiter!  It’s a sweet, fruity dipping sauce, a purple-red in color.  There was also Onion and Cilantro chutney on the table.  I stayed away from both of those, but the purple stuff was so tasty!

Getting back to our appetizer, the vegetable samosa came to the table with 2 on the plate.  They were large, almost the size of my fist!  Perfect for the 2 of us to share. 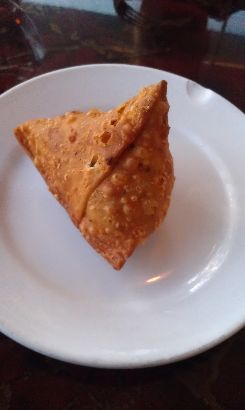 They were fried and crunchy on the outside and inside they were filled with a mixture of mashed up potato and green peas with some different spices.  It had a tiny kick but it was nothing we couldn’t handle. I loved the crunchy outer shell and the warm soft flavors on the inside.

Pretty soon our waiter brought out our entrees.  We each had our own bowl of the Tikka Masala and a shared bowl of white rice and of course the garlic nan.   Everything smelled divine!  Now for those of you who have never had Indian food, let me tell you what is in the Chicken Tikka Masala so you don’t think it’s some kind of smelly, gross, scary food that you will never want try, because I promise it’s really good! 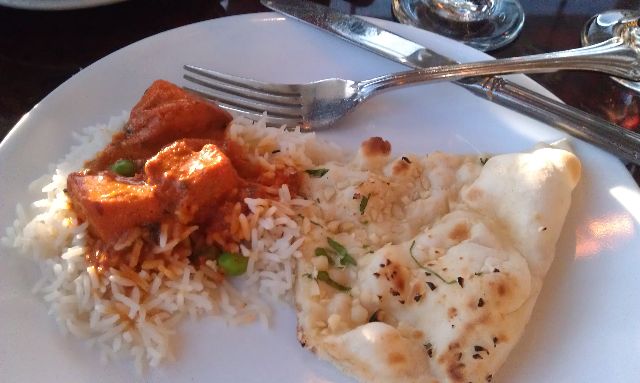 Chicken Tikka Masala consists of boneless chicken breast grilled in the tandoor (clay oven) and slow cooked in a creamy tomato sauce.  It has a small kick from the spices but when you put it over the white rice, that seems to cut the heat almost immediately.  The creamy tomato sauce is so good!  It’s not like Italian tomato sauce (gravy) its very smooth and full of traditional Indian flavors.  Oh man, we had a party with that food.  I was so full by the time we were ready to leave that I had to take the rest home with me.  I had it 2 days later for lunch at work and it was just as delicious.

Nicole and I did have some dessert.  She had something called Rasamalai which is something of a cheesecake (2 bite-sized cheesecake-like balls) soaking in a milky sauce.  Nicole loved it. I tried it and the texture was definitely not to my liking so I stuck to homemade vanilla ice cream with pistachios on top.

I have found the Tikka Masala simmering sauce at both ShopRite and Trader Joe’s but so far, nothing compares to having it made the right way, fresh from a great restaurant like Tanjore!

Take care and happy eats til next time!
-Aimee Ellis of Foodies 101