People are reading
You are at:Home»Columns»MK Diary: Permits, Logos and Breadcrumbs, Oh My!

Meetings, material lists, and building permits have been at the top of chef Nick Di Bona’s prep list for Madison Kitchen.  The big news this week is the unveiling of the final design for the logo.  Ta da!

and since the design morphed into something quite different, Madison Kitchen is inviting everyone who voted in their Facebook “pick the logo” contest to a private soft opening.  Out of 46 comments, special congrats goes to Ms. Barbara Gallo for choosing the winning design #2.  Nick was so excited about the final logo that he posted his own children’s scissors and glue stick version on his Facebook page.  It was quickly replaced with a more refined rendition compliments of Brian Eddolls of Blue Station Pictures, but not without giving Nick a talking to about leaving the graphic design to the professionals –“hey, do I put ketchup on your foie gras?”  Point duly noted!

Over a power lunch at Kittle House, Nick got the unique opportunity to pick the brain of a prominent NYC restaurateur.  I’m not at liberty to say exactly who, but I can tell you that it’s pretty major to get advice from someone who has received three NYTimes stars along with a few from Michelin for his three restaurants.

One of the many things discussed was which point of sale (POS) system to purchase.   It’s not just about reservations and printing checks.  This system will be the backbone of the front of house and the vehicle for all communication to kitchen.  Nick has decided to use Breadcrumb (love the name!) restaurant management software.   So, when diners come to Madison Kitchen, they shouldn’t be concerned that their servers look like they are surfing the web on the wall-mounted iPads.  Those iPads will be the gateway to reservations, ordering, billing, and much more.

Since he has been out of the kitchen tending to all these business details, Nick is definitely going through some culinary withdrawal.  To keep his sanity, he’s beginning the process of designing the menu.  There’s talk of including dry aged steaks in the mix, which Nick feels is something that is missing from the dining scene in Larchmont.  An unusual ingredient that may make an appearance on the menu are finger limes in a Salsa Citrus Caviar. 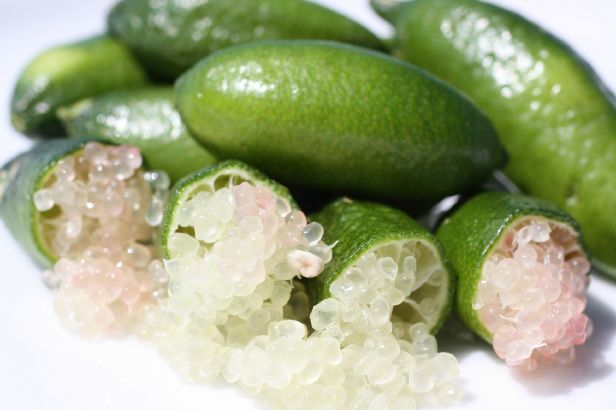 Those cuties are finger limes from Shanley Farms and the pulp is made up of little spheres bursting with a lemon-lime-grapefruit flavor which, when squeezed out, look quite like pearls or caviar.  Here’s a few more things on the starter menu to whet your appetite — Tamarind Vinaigrette, Creamy Roasted Garlic Dressing, Meyer Lemon Jam, Vanilla Bean Cotton Candy, and Sicilian Olive Tapenade.  Hungry for more?  Me too!  Can’t wait to see what’s next.