People are reading
You are at:Home»Chefs»The Golden Knives Challenge: A Cook-Off For Westchester’s Top Toques 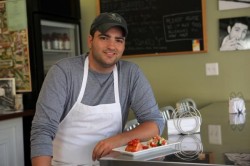 Any food lover will tell you: it’s torture watching judges sample the culinary creations of chefs competing on Food Network’s Iron Chef America or Bravo‘s Top Chef and not be able to taste test for yourself.

Tuesday marks the start of the Golden Knives Challenge, a three-week long tournament at The Lodge at Hudson Harbor in Tarrytown, which pits six of Westchester’s chefs in a cooking competition.

Each evening features a three-course meal from two competing chefs. At the end of the evening, you cast a vote for the winner and the winning chef moves on to the next round. Tickets are $50 and include the chefs’ two appetizers, two entrees and two desserts as well as beer provided by Captain Lawrence Brewing Co. There are two seatings: 7 and 8:30 p.m.

The starting match ups are:

The three winning chefs and a fan favorite selected by votes on the Golden Knives Facebook page will advance to competitions on May 14 and 15. The winners of those dinners will cook off on May 22 and 23.

The winner gets a cash prize, which comes from the proceeds of the dinners, and a trophy. “It’s a big goofy trophy with knives and a chef’s hat,” says Eric Korn, above, who organized the tournament. “It’s as ridiculous as possible.”