People are reading
You are at:Home»Columns»Westchester Breakfast Club’s April Roundup!

April showers bring brunch. At least that’s the saying that the WBC lives by. Our April was an international one, with dining experiences of France (courtesy of Patisserie Salzburg and La Renaissance
Patisserie Francaise, both in Scarsdale) and of Spain (via Sala-on-Hudson in Croton). How did our
Westchester European morning dining adventures go? Read on! 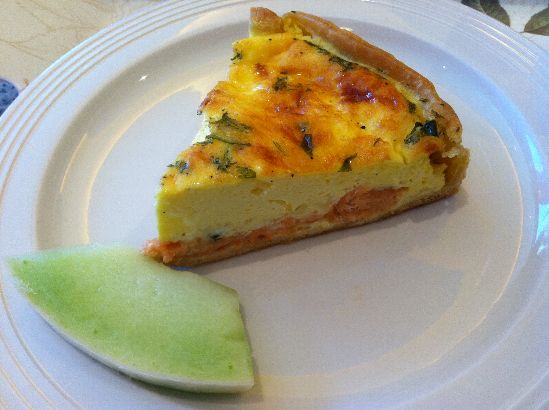 April 6:  We start off April with a French double header
in Scarsdale, paying visits to Patisserie Salzburg and La Renaissance Patisserie Francaise.
Scarsdale’s Salzburg is much larger than its counterpart in Rye. It did strike us as interesting
that there are two French cafes in such close proximity, but we went with it. First stop was
Patisserie Salzburg. The offerings in the display cases look delectable, and there’s certainly a lot
of variety. There’s typical French fare like macaroons and chocolate croissants, but there are also
general gourmet shop/deli types of dishes, like salads, latkas, and paninis. Salzburg tries to step
out of the box with items like the duck quesadilla and short rib tea sandwich (but we’re not too
sure how well a short rib would sit with a cup of tea). Sylvia and Jeff each tried a slice of quiche,
but unfortunately found it to be bland and unremarkable. A better choice was the trio of tea
sandwiches that Shelley sampled—for $2.50 each the price was right and the flavors were
delicate, as you’d want in a good tea sandwich. While the chocolate croissant that Sylvia
sampled was fluffy and chock full of chocolate, the red velvet cupcake that Shelley chose was
disappointing; the frosting was not a delicate cream cheese frosting but rather a frosting that
tasted like pure cream cheese, with very little sugar added. The flavor didn’t blend well with the
cake. Probably best to stick to the French pastries at Patisserie Salzburg. It’s location steps away
from the Scarsdale train station makes it a good place to grab a quick cup of coffee and a
croissant before heading into work. By contrast, La Renaissance Patisserie Francaise has much
fewer offerings than Salzburg. It’s also much smaller, giving it a more intimate café feel, the
kind of place where you’d want to huddle over a cup of coffee close to your companion. The
winner at La Renaissance is its French Onion Soup. There’s a sign by the counter saying “Ask us
about our French Onion Soup.” So we asked. And we got a couple of cups. This is, we dare say,
among the best French Onion Soup we’ve had. The onions are soft and sweet, the stock is
surprisingly light for a beef stock; there’s a balanced blend between seasonings; the croutons are
thick, crunch cuts and the whole thing is topped by shredded gruyere cheese (as opposed to the
thick slab of cheese we’re used to when getting a crock of French Onion Soup at other places).
It’s worth a trip to La Renaissance to try this soup alone. 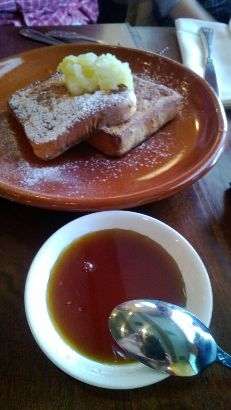 April 20:  Those who follow the WBC know that we’ve been disappointed in the past when trying breakfast or brunch at a restaurant that offers a specific cuisine. So it was with our guard up that we headed to Spanish restaurant Sala-on-Hudson in Croton. Sala’s hard to miss if you’re not looking for it; it’s situated in a non-descript strip of stores, sandwiched between a pizza place and a nail salon. But once you step inside, you’re welcomed by the pleasant Spanish ambiance. Sala only started serving brunch in April, so we were among the first to try their dishes. We were quite pleasantly surprised. The brunch menu is varied, offering egg dishes, sandwiches, and traditional tapas plates, all for an average of $10. (The exception is the paella, which is meant for a minimum of two people and is $19 per person.) The dishes we sampled struck the right chord between breakfast and Spanish flavors. Case in point: the bocadillo de huevo con jamon y queso. This is an egg sandwich with Serrano ham and manchego cheese. It’s the right way to put a Spanish spin on a breakfast favorite without making things too fussy. A simple side of mixed greens was a great way to round out the dish. Another winner was the torrijas, thick slices of French toast topped with powdered sugar and an apple compote; this comes served with Pedro Ximenez syrup. The plate we ordered for the table was passed around several times and not a crumb was left at the end. The revuelto de paella was an intriguing and successful offering; it’s chicken paella with scrambled eggs. We’ll definitely return to Sala not only for brunch but also to try the tapas plates for lunch or dinner. Sala is a very welcome addition to spice up dining in the Croton area.