People are reading
You are at:Home»Cooking»Recipes for Yellow Butter Cake and Buttercream Icing from the Culinary Institute of America

Frosting cupcakes to look like flowers—such as CIA Dianne Chef Rossomando’s sunflowers, zinnias, and chrysanthemums—is easy when you use a pastry bag and a special “leaf” piping tip that you can find at most kitchen and craft stores. To create a two-tone effect that mimics the looks of flowers in your garden, alternate two complementary colored frostings side by side in a piping bag.

For a video demonstrating the recipes for Yellow Butter Cake and Buttercream Icing, visit this post: Frosting Cupcakes to Look Like Flowers: A Mother’s Day Tip from the Culinary Institute of America. 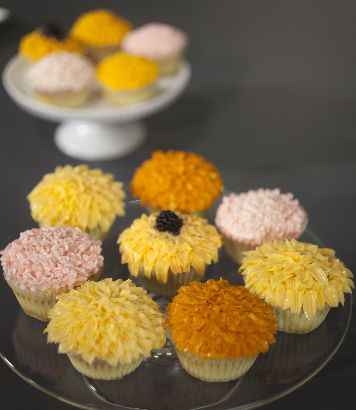 Recipes adapted from Baking at Home by the CIA.

Recipes adapted from the Baking at Home with The Culinary Institute of America.

Once blended, buttercreams can be stored in the refrigerator for up to 2 weeks. To use after refrigeration, let the buttercream soften at room temperature for about 15 minutes. Transfer it to the bowl of a stand mixer and beat with the paddle attachment until it is a smooth, light spreading consistency, 3 to 4 minutes.