Last night, friends and challengers Chef Carl Van Dekker (Village Dog, Tarrytown) and Chef Sean Corcoran (Peekskill Brewery, Peekskill) faced off in round two of the Golden Knives Challenge to see who would move on to the finale of the three-week long tournament at The Lodge at Hudson Harbor in Tarrytown.

Although behind the scenes jabs were certainly thrown in the makeshift kitchen outside The Lodge, what occurred on diners’ plates yesterday evening was a cohesive meal—the pair certainly worked together to come up with a menu that would not only challenge each other, but also pair well. 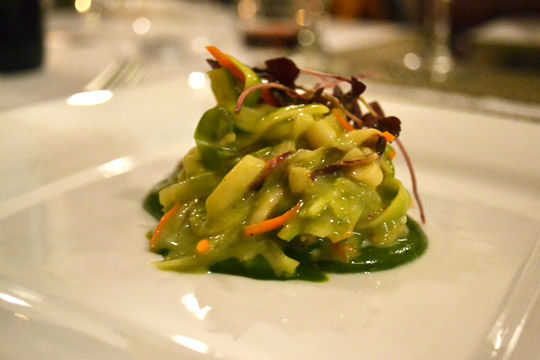 Chef Van Dekker’s appetizer, grilled calamari served with yuzu and shiso, followed well behind Chef Corcoran’s asparagus salad with radish, arugula, and stinging nettle pesto. (Although the menus did mention a cured egg with Chef Corcoran’s salad, there wasn’t one to be found. But it’s a testament to the challenges the chefs face—sometimes food doesn’t travel well or things happen in the kitchen, and it just doesn’t make it on to the plate.) 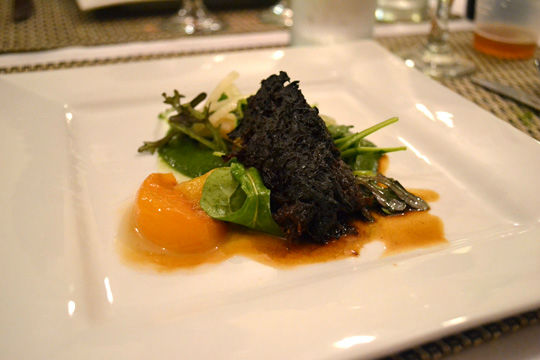 In the second round, it was Chef Van Dekker’s dish that had a MIA ingredient in the 8:30 seating—the braised beef cheeks were paired with a salad instead of bok choy. (Chef Van Dekker revealed later that the bok choy hit the ground before plating.) But most diners did not miss it, and had the opportunity again to dine on an outside the box main course that left them wanting seconds. 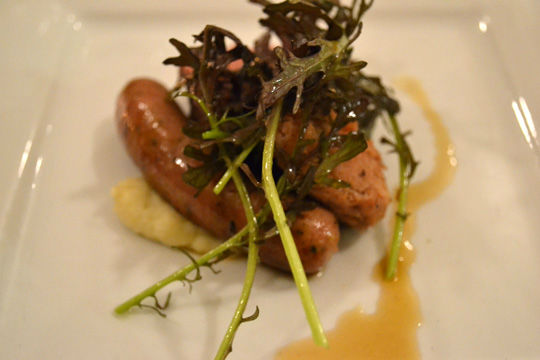 Chef Corcoran got a little playful in his main course, delivering on a duck trio—seared duck breast, duck confit and duck sausage (against The Village Dog? Sounds like a challenge!) served over sunchoke mash. 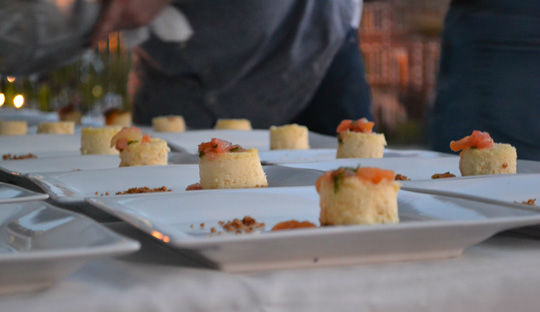 Dessert was nothing short of impeccable—the cheesecake citrus caramel from Chef Van Dekker was a light offering against Chef Corcoran’s decadent chocolate tart. But it was Chef Van Dekker who edged out the win. He will face Chef Eric Korn (Good-Life Gourmet, Irvington) next week in a two-evening finale. To reserve your tickets, call 914-747-0519 or email events@­cappa­crucy.­com.

The winner was announced this morning on the Golden Knives Challenge Facebook page:

“In one of the best all-around meals of the Golden Knives Challenge, Carl Van Dekker has won the semi-finals in his match against Sean Corcoran.”

Golden Knives is a three-week long tournament at The Lodge at Hudson Harbor in Tarrytown, which pits seven of Westchester’s chefs in a cooking competition.

Each evening features a three-course meal from two competing chefs. At the end of the evening, you cast a vote for the winner and the winning chef moves on to the next round.  The winner gets a cash prize, which comes from the proceeds of the dinners, and a trophy. Tickets are $50 and include the chefs’ two appetizers, two entrees and two desserts. There are two seatings: 7 and 8:30 p.m., and the evening is BYOB.

The Lodge is the clubhouse for the condominiums at Hudson Harbor, on the water in Tarrytown. It’s adjacent to River Market Bar & Kitchen, the new restaurant being opened by the owners of Crabtree’s Kittle House in Chappaqua. The Lodge is at 2 Hudson View Way in Tarrytown.

Katie Schlientz will be tweeting live from the Golden Knives Challenge next week. To get a sneak peek at menus, follow her @KatieSchlientz, #goldenkniveschallenge. For more event photos, visit pinterest.com/katieschlientz/golden-knives-challenge/.