I moved back to Westchester shortly before Mother’s Day last year. 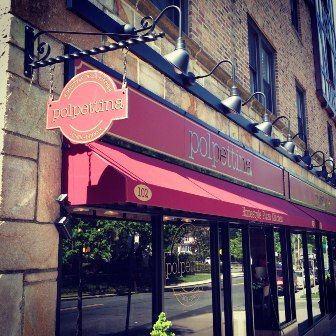 Being that I had finally returned from a seven-year stint in New Jersey, and it was my first Mother’s day as a Mama,  my mom, sisters and I had a lot to toast to. Using my new-found pull as part of the “Celebrated Mom’s” club, I suggested we do brunch, just us goils. And with that a new tradition was born.

And this year – I flexed my Mama muscles pretty fiercely when I discovered one of my favorite spots in town would be hosting a prix fixe feast.

Polpettina might actually be the first new restaurant I discovered when I moved back. From one taste of their eggplant chips I was hooked and interested in seeing what else my home-county had to offer by way of locavore goodies. Recently, they have added an expanded dining room and a brunch menu to their repertoire and I had been anxious to check both of them out. With a $20 price tag for an appetizer, entrée, dessert and unlimited mimosas or bellinis, the Mother’s Day brunch seemed like as good a time as any to pop on by the Eastchester eatery. My mother and sisters were on board and we scored an 11 am reservation (which they were also only doing especially for the day.) 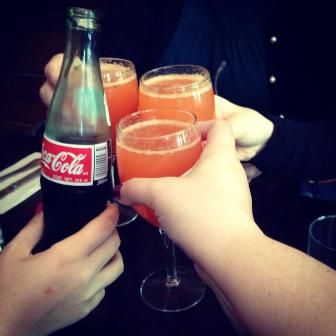 We were greeted and sat promptly, helped by a friendly waitress who supplied use with our first round of blood orange bellinis (and my 14-year-old sister with a vintage-inspired bottle of Coke, much to her delight.) The menu at Polpettina is a rustic Italian and the brunch offerings were no different. We decided on ordering the salad (served with beets and a heavenly burrata,) a roasted grapefruit and the yogurt parfait. A Greek yogurt connoisseur, my middle sister delved merrily in to the granola, honey and yogurt parfait leaving barely a trace of the tangy treat. The salad was a nice mixture of field greens and candied walnuts and the burrata was creamy, delicious and heaven sent.

Most of the main courses were pretty par for the course – frittatas, a pasta offering, a thick, caramel and banana stuffed French toast – and were definitely tasty. But the menu also was home to a few twists on classics like an eggs in toast featuring kale and multigrain bread, as well as Polpettina’s own take on “Bacon & Eggs” which my youngest sister and I ordered. For this, they served a poached egg cooked eggs in purgatory style and then finished off with shreds of smoky pork belly. It was fairly killer.

But we were all mutually most stoked to taste the final course. Just two options for dessert – zeppoles and gelato – but quality certainly made up for quantity. My mom, middle sister and myself each chose a different flavor of gelato and received out treats in mini jars topped off with one of my favorite-favorite amaretti cookies. Ever the rebel, my youngest sister made the brave (seriously, kid, one bag of fried goodies at a table of four women?!) selection of the zeppoles. Served in a delightfully greasy brown bag alongside an espresso cream, the bite-size donuts were a definite yes. 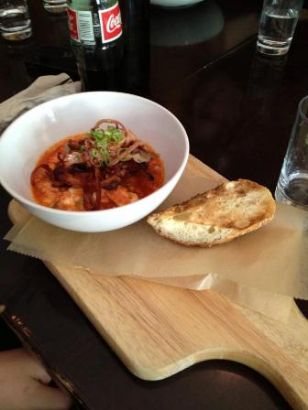 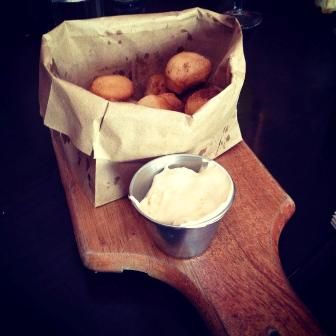 The libations themselves were tasty enough and the team there certainly kept our glasses full. Brunch is usually served ala carte but the entrees all hover around $10 and all look just as yummy as what we tasted that day. And if mimosas aren’t your thing, check out one of their breakfast beer mixes like the Bloody Mary inspired “Bloody Brew” or a more masculine take on the classic oj cocktail the “Man-Mosa”. 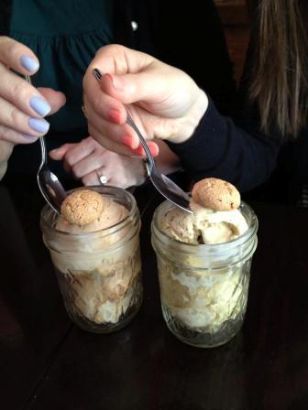 Polpettina has found another hit with their brunch, I may even have enjoyed it as much as their eggplant chips… Maybe…