People are reading
You are at:Home»Drinks»Beer»Notes From the Captain Lawrence Tasting Room, Vol. 61

It was the informal start to summer, but the weather—a critical performer in the annual drama known as Memorial Day Weekend—refused to play along for the first few days. When it was warm, it poured. When it was sunny, it was chilly. The closest many got to diving into the surf was driving through the flooded Saw Mill River Parkway.

Plan Bs were deployed, and for those who found themselves at Captain Lawrence, things worked out just fine. (Keep in mind the brewery gets its name from Captain Samuel Lawrence, a Revolutionary War hero, so it was actually a logical Memorial Day choice.) “The weather was crappy, so we decided to come here,” says Adam Romboli of Port Chester as he sips the Smoked Porter on Sunday.

Adam’s group shelved a weekend on Fire Island, and is making the best of it. Pal Lauren Barth of Brooklyn enjoys the Sun Block, Jenelle DiManno of Harrison has opted for the India Pale Ale, and Kirra Clark deflects her friends’ “Jersey Shore” jokes like a goalie wards off pucks.

Their schedules suddenly wide open for the weekend, it’s the group’s first trip to the brewery. “We’d been meaning to come for a while,” says Andrew Vranes of Harrison as he enjoys the Kolsch, “and it just worked out today.” 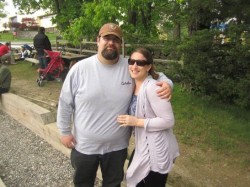 Rick Ferrarone of Medford, Massachusetts and Courtney Rissner-Katz of Pleasantville have been to Captain Lawrence many, many times; both grew up in South Salem, down the block from founder Scott Vaccaro. “We’ve been drinking Scott’s beer since he was making it in his garage,” says Rick with a smile.

They’re watching some friends play bocce while enjoying the Liquid Gold. Rick has a growler of it, along with a sixer of Brown Bird Ale–both slated for the trip back to Boston. “Unless I drink it first,” warns Courtney.

Rick too isn’t above talking a bit of smack: he’s looking forward to taking on Scott and Scott’s brother Marc in a little summertime competition coming up in South Salem. “I look forward to thoroughly whipping Marc and Scott in next week’s fishing derby,” he says. 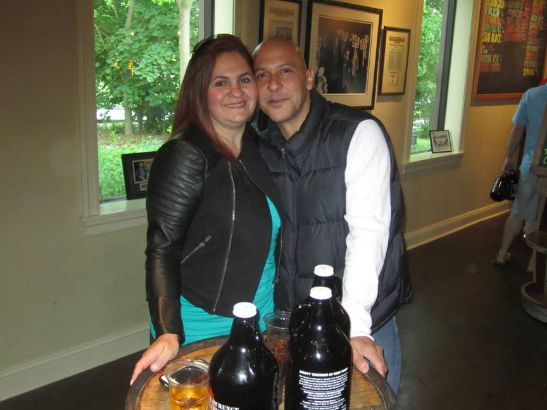 While some would prefer to be casting a lure, lazing on a beach or celebrating heroes at a parade, Paulo Mori and wife Erica Chahade of White Plains describe the Elmsford brewery as heaven on earth. “It’s very casual, people are very friendly, the atmosphere is awesome, and everyone who works here makes you feel at home,” she says.

Asked for their fondest Memorial Day memories, Paulo, who works for Manhattan Beer Distributors and swears by Captain Lawrence’s IPA, scores some points at home by saying any one of them spent with his wife. For her part, Erica—quaffing the Kolsch–recalls a barbecue they had a few years back. “Just our family together,” she says. “He, of course, brought the growlers.” 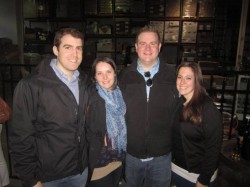 For Sam and Liz Sharpe of Manhattan, the holiday weekend has long included a trip to Captain Lawrence, and some quality time with pals Darya and Brad Schwartz of Scarsdale. Brad found the Smoked Porter to be “aggressive” (translation: a bit too smoky), and says the Pale Ale is “just north of Sammy” (translation: a hops upgrade from Sam Adams).

Growlers filled with the IPA and the Sun Block are lined up on the foursome’s barrel. “With our friends coming up, it was a perfect thing to do with them,” says Brad. “Go to Captain Lawrence and try some beers.”

With Monday’s forecast a long awaited winner, Sunday’s growler line is long, people stocking up for their various barbecues and other social engagements. A man got to the front of the line, gave his order, and his fiancée soon joined him. “You’re filling up two?” she asks.