People are reading
You are at:Home»Restaurants»First Look»Fortina in Armonk: Videos! Pics! Pizza!

I have three new posts on Fortina in Armonk, the restaurant set to open soon in the new Armonk Square in downtown Armonk. Chef-owners Christian Petroni, Rob Krauss and John Nealon are putting the finishing touches on their new spot, but they let me in for a sneak peek. 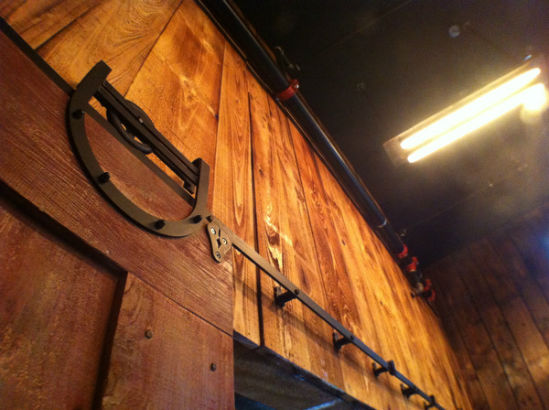 Here’s a look at what we wrote about Fortina in our fall restaurant preview:

As if farm-to-table darling Restaurant North and horse-country-chic Moderne Barn weren’t enough of a draw, one of Westchester’s best young chefs is giving diners another reason to visit this small hamlet.

Chef Christian Petroni, formerly of Peniche in White Plains and Barcelona in Greenwich, Conn., and a partner in Cooked & Co. in Scarscale, is opening Fortina, a new peasant-influenced Italian restaurant with a wood-burning oven in the new Armonk Square. He hopes to be open by the new year.

The menu will reflect his training in Spanish cuisine and his childhood summers spent in Italy. Fortina is the name of a little fort that his grandparents own on the island of Ponza off the west coast.

“It’s Italian without being red sauce,” he says. “It’s more reflections of where I’ve cooked and learned and spent time.”

Petroni is known for his bold but balanced flavors and creative twists on tapas. A few dishes he’s working on include burrata from Joe’s Deli on Arthur Avenue with mission figs, fired rosemary and saba (a syrupy condiment like balsamic vinegar); a Fiorentine-style, wood-roasted, dry-aged hanger steak with arugula salad; and a wood-fired pizza with zucchini flowers, fiore de late, leeks and chili oil, which he is naming “Fiorella,” after his mom.

He’ll be serving a range of appetizers and pizzas, plus a half-dozen each of pastas, entrees and contorni, or sides — all served to encourage sharing.

“If you order the steak it will come with sauce and accoutrements, and you’ll order a couple of sides to go with it,” he says.

The restaurant will also have a garden, where Petroni will grow vegetables and herbs. His partners are John Nealon, a former general manager at Barcelona, and Rob Krauss, a marketing expert.

The restaurant will have a sleek, industrial look with polished concrete, subway tile and unfinished wood. “It will be minimalist — a cool look, but more focusing on the cuisine,” he says.