People are reading
You are at:Home»Drinks»Beer»Notes From the Captain Lawrence Tasting Room, Vol. 62 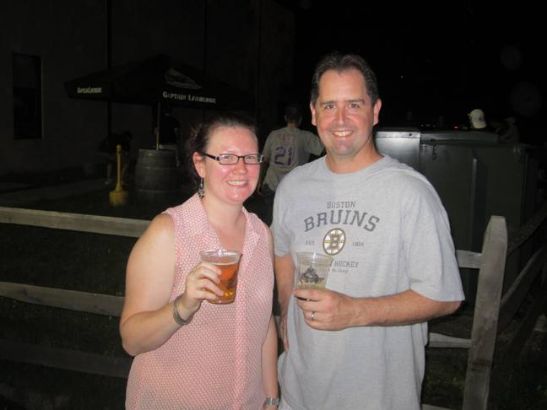 Rich Queen was down from Woburn, Massachusetts on business, selling medical supplies in Westchester for the day, and figuring he’d spent a boring night watching TV in his hotel room when the message popped up on Facebook: a cornhole tournament at Captain Lawrence.

Next thing he knew, the man found himself at the brewery, rocking his Bruins t-shirt and Baaahhhstin accent, slinging beanbags in the sultry pre-summer night.

Captain Lawrence, and Pat Ward of the cornhole board maker Ward Boards, brought together an array of bag-tossers and craft beer-quaffers for their second-ever cornhole tournament.

What is cornhole, you, dear resident of the northeast, ask. It involves a pair of raised boards spaced about 10 yards apart, each with a six inch hole cut into them, and players taking turns hurling bean bags into, or at least close to, the holes. Think of horseshoes, but with bags aimed for holes instead of iron rings hurled at posts, and nothing that can leave a serious dent in your shin. A bag in the hole counts for three points, while one on the platform scores one, and the first one to 21 wins. (Thanks, Wikipedia!) 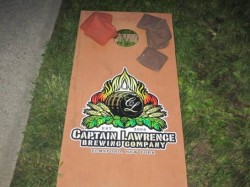 Rich had partaken in this pastime a few times before, though never in such a setting. “It’s nice to play outside, even if it’s a little hot,” he said amidst thick air that didn’t slip much below the day’s 90 degrees. A cup of Smoked Porter, he said, cut the heat nicely.

The tourney was a blind draw, meaning players got paired up randomly, and a team comprised of Rich and Beth Bricker of Pleasantville zipped through the early rounds. Beth originates from Illinois, where cornhole’s history runs deep; she grew up knowing the game as “bags” or “baggo,” she says.

The key to successful cornholery, besides a cold cup of Kolsch? “My partner Rich,” Beth says with a smile.

Indeed, good partners and good beers are equally essential. For Shane Noetzel of Elmsford, the ideal beer for cornhole is the Imperial IPA. “I’ve done all the beer sports”—bocce, softball, darts, Frisbee golf—“and there’s nothing better than drinking beer and playing cornhole,” he says.

And so they played, the sounds of bags hitting boards–thukk! thukk! thukk!—carrying through the quiet Elmsford night. The knockout rounds continue. Strange calls—“Cancel it!” “Nice bag!” “It holds!”—rang through the air as well. While cornhole can be competitive, the mood is unfailingly jovial; players decide who gets first toss by a sudden death rock-paper-scissors, and conversations—the new season of Arrested Development, weekend plans, favorite beers at Captain Lawrence—carry on during play. Heck, a guy could even wear his Bruins shirt days after the team knocked out the Rangers without a Blueshirts fan getting in his grill. 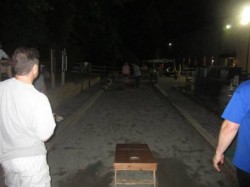 Dennis Montaruli of Irvington won his first three matches before a loss relegated him to the loser’s bracket. Dennis—who picked up the game from family in Ohio (his father in law made him a “beautiful” set of boards and bags, he says)—was having fun nonetheless. “I was a big horseshoes fan,” he says. “It’s similar, but this is less wear and tear on the old elbow as you get older.”

As the competition winds down, the finals find Beth and Rich against Pat and his partner Jack. Beth, the lone female in the competition, employs a looping rainbow style with deadly accuracy, like Knick Nate Robinson shooting a floating jumper; while Pat, a southpaw, puts a funky spin on the bag that keeps it on the board like it’s soaked in Stickem. “It’s one of the things you’ll see from the good players at tournaments,” Pat says, bag in one hand and Smoked Porter in the other.

But it’s Beth & Rich—true to the game’s rural roots, the team names sound like country acts—who take an early lead, and never look back. Pat & Jack level the scores at 14, but Beth and Boston Rich run away with it to take the game—and the cash jackpot—21-15.

The key to victory? “Beth really stepped up her game in the final,” says Rich.

There is that. But maybe there’s more to it. For the first time all night, both sipped the same beer while competing: the German-style Captain’s Kolsch. “That was the key too,” says Rich.

Rich had the traffic-snarled trip to Boston to contend with in the morning, but for the night, he, and Beth, held backyard bragging rights at the brewery.