People are reading
You are at:Home»Columns»Buffet de la Gare in Hastings Closing; Chris Vergara of Harper’s and Meritage Will Open It as St. Georges in September

There are only a few short weeks left to dine at Westchester’s beloved French restaurant, Buffet de la Gare in Hastings-on-Hudson.

Chef Chris Vergara and his business partner, Jason Steinberg will be taking over the space where the restaurant has been in Hastings-on-Hudson for the past 33 years. Annie Goulet, whose husband, the chef Gwenaël Goulet, died in 2011, will retire, and take the name with her.

The new restaurant will be called St. Georges, and Vergara and Steinberg will open in September.

“It was a tough decision for me,” says Annie. “I was like, ‘What am I doing?’ All these people are going to be upset!” But Annie decided the time was right. Her son, Gwendal, who is with her in the photo below, has been helping her run the restaurant since before Gwenaël died, and it was time to allow him to pursue his own career in hotel management. 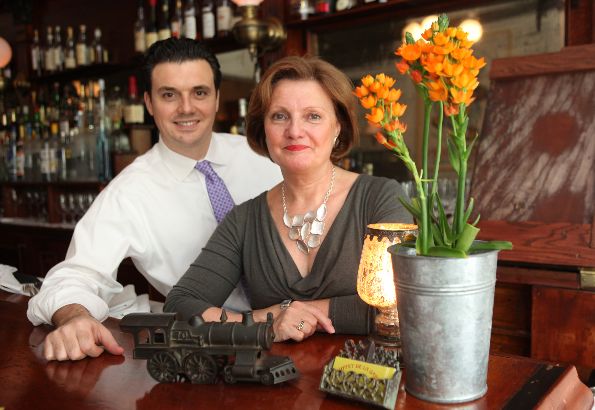 The new restaurant will be “simple, casual, contemporary French,” but at a moderate price point and with a “funky” modern twist, says Vergara. “We want to keep one foot in the new world and one foot firmly in the old world,” he says. “We really really love the French sensibility and authenticity and that approach to dining and entertaining. So we want to keep the experience pretty close to that, but we want to make it accessible.” 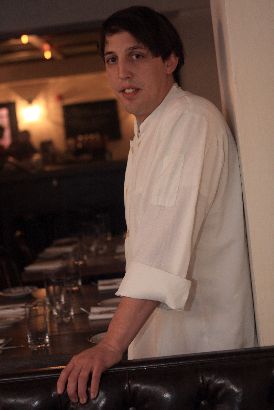 And by that he means fun. “Jason and I have been talking about we want a place where we can go and eat copious amounts of raw oysters and drink French wines.

“We want to put a together place that has all the dishes that me and my chef friends want to order,” he says. “First we order every piece of seafood on the menu, then we move on to terrines and cheeses. That kind of thing.”

As for the design, Vergara, right, says it has to be done delicately. The restaurant has a reputation for being one of the coziest rooms in Westchester, and has a turn-of-the-last century tin ceiling and a big mahogany bar with distressed mirrors. “You’d have to be a fool to rip out that tin ceiling or change that bar.”

Plans by Brooklyn-based creative firm Nothing Something, designers of the interiors and branding for Harper’s, include “transformation of the upstairs into a beautiful, bottle-adorned dining room, which will be available for a la carte service as well as private events,” according to a press release.

Vergara, who began his career cooking classic French cuisine at La Panetiere in Rye and at Picholine in Manhattan, opened Meritage, an Italian restaurant in Scarsdale, in 2004, and Harper’s, a gastropubby bistro in Dobbs Ferry, in 2010.

“We’re all longtime admirers of the former owners,” he said in the release. “We’re lucky they’ve allowed us to build on their legacy.”

The Goulets, who came from Brittany in 1979, started on their path in Westchester when they bought Buffet de la Gare in 1980. Maxime Ribera, a fellow Breton who formerly owned several Westchester restaurants, sponsored their green cards. Bernard Le Bris, Gwenaël’s good friend from his hometown, gave him the collateral to buy the restaurant.

Their first menu was simple: burgers, onion soup and quenelles, little dumplings that were very fashionable at the time.

But Gwenaël hoped one day the food would be more upscale.

“It was my dream to one day serve shrimp,” he told me for a story in 2005. He did that, and more. Today the menu includes dishes like vol-au-vent with chunks of lobster, and a decidedly formal foie gras.

Annie Goulet says she wishes the new owners the best of luck. “I hope that it will continue to always be the success it has been,” she says. “That’s my wish for them.”

In the release, Steinberg added: “It’s humbling to be handed the keys to a restaurant that has been such an icon.”