People are reading
You are at:Home»Shopping»Farmers Markets»Seasonal Chef: Getting Creative With Spinach

Just mention the word spinach and you will get a wide variety of responses, from absolute dislike to love.  I’ve always been of the opinion that when people tend to hate a particular ingredient it can usually be traced back to some particular preparation they had as a kid. In the case of spinach probably overcooked and under seasoned. Sometimes you just need to just a different lens when looking at in ingredient and in this case getting a little creative with spinach.

We all know the drill: spinach is loaded with all sorts of vitamins and nutrients; the list is long with Iron and Calcium at the top. As a matter of fact, spinach has almost one and half times more Iron than beef. One little tidbit I did learn in my research about spinach was many believe it originated in ancient Persia and from there was carried to India and China. In the 9th century it appeared in Sicily and by the 16th century spinach really hit its stride.

There are a few different varieties of spinach today, but generally we see it in two versions at the farmers market and grocery store. Ripply textured Savoy, as pictured above, and Flat Leaf seen as the tender baby version. It grows well in cool and warm temperatures so this wonderful ingredient comes to us from the Spring right through to the Fall. The savoy version is a little heartier and can hold up longer in cooking. However, all spinach has a lot of water content so eventually it will break down and get soft. 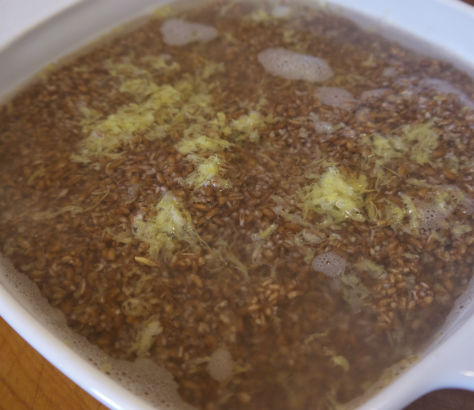 I got creative with my ripply spinach this week. After a quick rehydrate of some bulgar wheat using lemon, I mixed together ingredients found in a typical tabbouleh and Greek salad.

The result is a salad that is not only healthy but zippy and delicious. The active prep time is short leaving you to do other things in the kitchen. This dish is perfect on it’s own or along side grilled fish or meat. Check out my easy recipe for Greek Spinach Tabbouleh by clicking the recipe link. 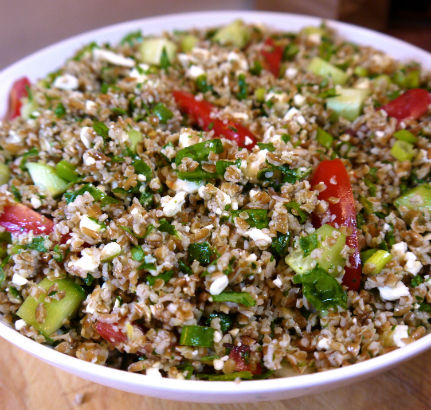 If you are a fan of tabbouleh and Greek salads, I know you will like this version. Today I will be demoing this delicious salad at the Irvington Farmers Market. Stop by between 4:30 and 6:30 for a taste, at my table.