People are reading
You are at:Home»Drinks»Beer»Notes From the Captain Lawrence Tasting Room, Vol. 65

It is the long awaited day—the first-ever Elmsford iteration of the annual Captain Lawrence pork and beer bacchanalia known as Pig Roast. The pig pilgrims are streaming in from all corners of the county and beyond—including on school buses shuttling the hungry hopefuls from train stations on all three Metro-North lines. 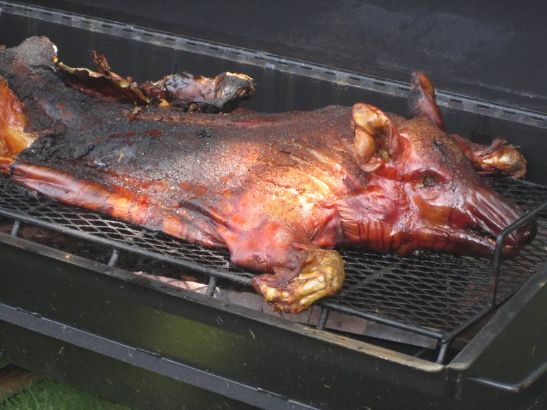 The parking lot features a stage made of wooden pallets, along with tents, tables, beer stands—and about 500 people in exceptionally happy moods. Rich Stumpf of Rye Brook woke up this morning, sipped his coffee, and googled “What to do in Westchester”, which told him all about the pig roast.

“I saw Captain Lawrence, I saw bands and beer and everything,” he says. “I said, we’re in.” 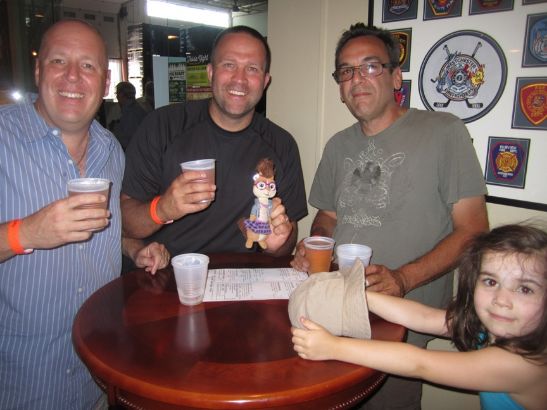 He got Keith Connelly and John Quaranta, both of Rye Brook, on board, and the day was set. Rich fancies himself as a cornhole aficionado, honing his game at Giants tailgate parties. He’s tickled to see that there are two separate games going on—one on the grass, a second on the blacktop. After the Rye Brook boys finish their cups of Sun Block, they’ll venture out to find a game.

Also on the blacktop—the band Brooklyn Sugar Company, banging out songs that blend seamlessly with beer and a sunny day. 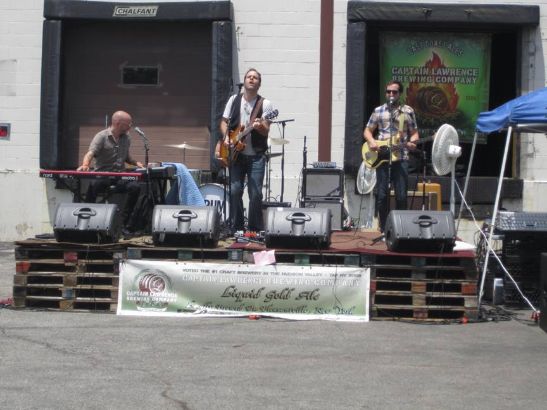 For Ricky Wilson of Norwalk, it is perhaps the greatest Father’s Day gift of his brief tenure as a dad, thanks to his thoughtful wife Karen Victory. (Names don’t lie–Karen is indeed a winner of a wife.) They’re enjoying Freshchester Pale Ales in the shade, and prepping for some serious pigging out.

It is the foursome’s first time at Captain Lawrence.

“We decided to tag along,” says Lauren Samson of Greenwich, along with her husband Matt.

There are, in fact, several black dogs cruising the parking lot, looking for scraps, and one particularly cute bulldog-terrier mix named Bo, cooling off under the tables. A boy in a Mount Pleasant Teachers Assocation “Giants” Little League uniform tosses a baseball with his dad. A man wears a t-shirt sporting Albert Einstein’s mug. Another wears one that reads “Guns Don’t Kill People—Dads With Pretty Daughters Kill People.”

Three pigs are belly down on the grills as the Village Dog guys work their magic. CL owner Scott Vaccaro takes the whole scene in, a broad smile across his face. “The sun is shining,” he says. “The beer is flowing.”

I ask a foursome in the tasting room whose idea it was to pop in to Pig Roast; pulling off some crafty slapstick, each one points at someone else. Jason Graf of Fairfield says he was here a month ago, tasting the beer, when he saw a Pig Roast poster. The idea has been on his brain, and his taste buds, ever since. “Food, beer–it sounded like an excellent Saturday,” he says. “We couldn’t miss it.”

Rich Stumpf has found a cornhole game, and slings bags with pinpoint accuracy. He hears a Massachusetts man won the brewery’s cornhole tourney last month. “Tell the Boston guy—we’re gonna win,” he says. “Write it down.”

A woman mistakenly refers to the game as “piehole”. Everyone laughs. There is the prevailing sense that, at least for the day, there’s no place anyone would rather be (except, of course, the luckless pigs). In fact, the brewery is just about the favorite place on earth for Caitlin Doody and Joe Mordus of Dobbs Ferry. “That’s Dr. Joe Mordus,” says Caitlin proudly of her fiance.

The two were searching for a place with special meaning to hold their wedding this fall, and realized the brewery offers everything they were looking for, in addition to, of course, excellent craft beer. “We didn’t want to do a traditional hall,” she says. “We said, what do we really like, and Captain Lawrence came up immediately. We’d go to the brewery in Pleasantville back when we were dating—it was always a very happy thing for us to do.” 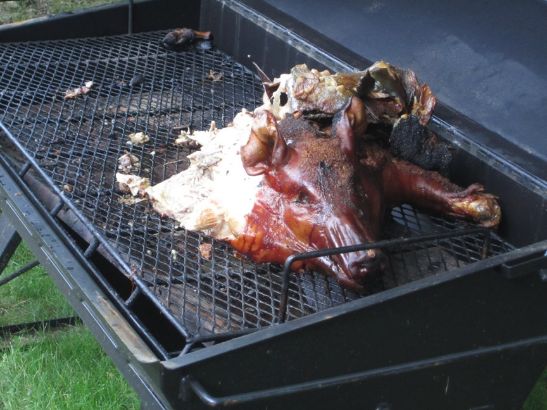 Staffer Nick Schwartz tries them all, and eyes the steadily shrinking pigs on the grill. He’s banking on there being enough left over for pulled pork lunch the next day.

“I’m hoping for a little hair of the hog,” he says with a happy smile.