People are reading
You are at:Home»Recipes»Seasonal Chef: Golden Beets

Simply mention the word “beet” and many people will roll their eyes and say “ick.” I’m not really surprised by that. As with many other vegetables, food memories as a child, especially bad ones, stay with you forever. Beets were one of those vegetables I remember as child coming out of can. Overly salted and boring. Fresh beets are a whole different ball game. During my tour of duty in the Tarry Lodge kitchen I regularly cooked over 100 pounds of beets a week. (Not all at once, thank goodness!) Andy’s Beets in Agrodolce dish is something you simply must try the next time you go. Sweet and acidic, as the name evokes, made with golden and pink beets. With the weather topping 100 degrees these past two weeks in Westchester, I decided to take my beets to the cold soup realm and kick it up with some Thai spices.

Let’s talk about beets, or as they are known technically called: beetroot. They come in several sizes and colors, the typical one being red. I picked up a bunch of golden beets at the Rye Farmers Market last week to make the soup. Golden beets are a little less sweet than their red sibling, but have a more mellow flavor. (A good option for the beet-haters to try!) Once cooked they take on a deep golden color and look divine in when served. Believe it or not, the beet greens are actually more nutritious than the beets, containing twice the potassium and are exceptionally high in beta carotene and folic acid. We’re going to set those aside for now, as I will be talking about the greens in another post.

In my beet research this week I read a couple of interesting tidbits: beets are native to the Mediterranean, with the leaves having been eaten since before written history, and were generally used medicinally; beets hit their stride in the 1800s when French chefs began using them; and last, red beet powder is used as a coloring agent for many foods, in particular frozen pizzas use it to color the tomato sauce. 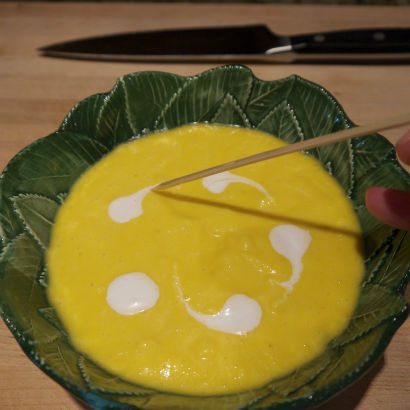 Getting back to my pretty bunch of golden beets, let’s talk about cooking them. You have two options: either roasting them in the oven or boiling on top of the stove. I opted for stove top simply because the idea of heating up my oven was not enticing with the weather. Plus, the stove top method is quick and easy. That is how I cooked them at Tarry Lodge, and they turn out beautifully. Simply start them in cold water, just like potatoes, and add a little kosher salt and sugar. Bring to a boil, lower to a simmer, and cook them for 15-20 minutes. Once they cool off a little the skins peel easily with a paper towel and you are ready to go.

Since I really wanted to have a completely different profile and an unexpected taste, I chose to go Thai using coconut and ginger as my base spice. With a little coconut milk left I used it to garnish the soup. The trick to making the pretty swirls is with a toothpick. Be sure to adjust your seasonings while the soup is warm and don’t be afraid to season it well. Once it’s cooled down the spiciness is diminished. Garnish this with a little chive and and fresh herbs and you will knock the socks off your guests. Click this link: to see my easy Thai-inspired Golden Beet Soup. 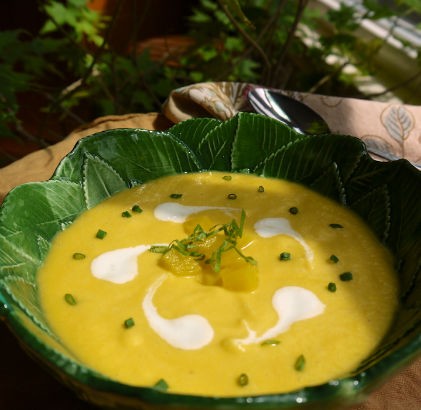 So the next time you come upon a bunch of golden beets at the market I encourage you pick them up and give them a try. Even if you just make them and add to a simple salad with goat cheese, a match made in heaven, you won’t be disappointed.