People are reading
You are at:Home»Drinks»Beer»Notes From the Captain Lawrence Tasting Room, Vol. 68

A hot summer day is, for many, ideal for enjoying beer outside, but the string of mid 90s scorchers these past few days, the mercury even climbing to 99 one day, has been a bit much. Even the Captain Lawrence patio’s considerable charms—the Adirondack chairs, grub off the Village Dog grill, the spacious tables—weren’t quite enough to draw visitors, plural, on a breezeless late-afternoon when the mercury hit 95. 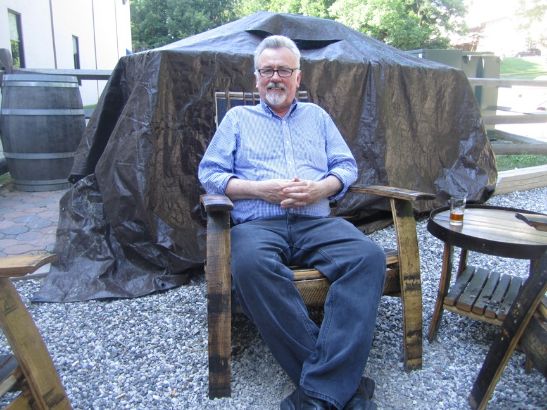 Richard Zeman is the lone man on the patio. Richard is from Manhattan, and teaches in the cell biology department at nearby New York Medical College. He’s an early arrival for a gathering of professors and students, and says the chair, besides being comfy, enables him to see his friends arrive from the various parking lots.

“I’m trying to figure out where people are, where they’re coming from,” he says. “I can wait for them from this vantage point.”

Richard sips a Pale Ale (“Great. Real crisp. A bite to it. Cold–it just seems right.”). He says he’s holding up OK in the heat, despite the black jeans and long-sleeve shirt.

A fellow professor sneaks up from behind.

“It’s 90 degrees! The beer is inside!” thunders Richard’s pal. “What part of this are we not getting?”

Richard smiles and takes a cool sip. His friend shakes his head and ventures inside. 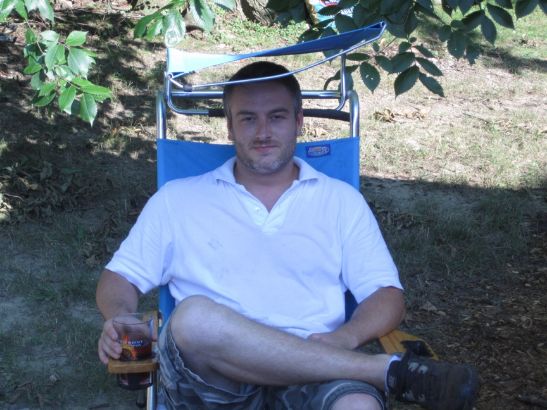 In fact, there is one other man sitting outside: Rob Cooper, unflappable grillmaster for the Village Dog purveyor of tasty bar grub. He sits on a beach chair with its own canopy, envisioning cooler climes. “I feel terrible for him,” says Dennis the doorman, nestled in the 76 degree-tasting room’s cool embrace.

Rob speaks of the food stand’s “Bermuda Triangle”—standing between the fryer, barbecue and cart, each giving off its own blast of fiery hell. “Plus, you’ve got the sun overhead,” he says. “And beer doesn’t help.”

What does? A few quick breaks inside, says Rob.

Indeed, the AC is humming. The Beatles’ “Carry That Weight” is on. A new brew, Monkey Madness, is a Belgian-style golden ale brewed with mango puree. There is some of the piney A.L.S. Pale Ale left, and the sweet and malty St. Vincent’s Quad. Aaron at the bar says the Sun Block, Kolsch and Liquid Gold are particularly popular when the weather gets sultry.

Walter Firkins of Valhalla has popped in after a movie for one of those Liquid Golds, extending his time in conditioned air a little longer. Ellie Kassner has made the trip across the river with her “best friends”—that would be mom Avis and dad Eric. Ellie is a “beertender” at Defiant Brewing Company in Pearl River. She says beer works well on a day like this.

“You need to hydrate,” she says with a smile and a Pale Ale. “You need to even more on a day like this.”

The Kassner clan seems particularly adept at finding positives out of less than positive situations. Eric, quaffing the Liquid Gold, is holding up just fine in the heat wave. “I can’t say it affects me,” he says. “This is a fun way to get your mind off the weather.”

For Avis, who enjoys a cool Kolsch, this kind of weather gets her out of an onerous chore. “When it’s this hot, I have someone else cook dinner,” she says–meaning Rob Cooper’s stay under that cooling canopy may not be for long.

Richard Zeman has finally found his way inside. (“I enjoyed the seat, but this is where the gathering is now,” he says.) But a few burly men have taken to the bocce court, even if their throws are a bit languorous in the summer stifle. “We were in Kansas for a month and a half, and it was 106 and humid every day,” says Greg Theophall of Mount Vernon. “Here, it’s nothing.”

He cools off with the popular Liquid Gold, while bud Matt Joe of Hartsdale has the Monkey Madness. Greg turns a bit philosophical when discussing the weather: summer is finite, he notes, and not to be wasted. “I’m not gonna let the heat sacrifice my time outside,” he says.

Indeed, the cool weather, and all of its respective pastimes, will be here before we know it. For some, that’s not soon enough.

“I wish it was snowing,” says Eric Kassner, “and we could all go skiing this weekend.”

Captain Lawrence Brewing, at 444 Saw Mill River Road in Elmsford, is open Wednesday through Sunday. The author is paid by Captain Lawrence, partially in Freshchester Pale Ale, for “Notes From the Tasting Room.”