People are reading
You are at:Home»Restaurants»Openings»Alamo Drafthouse Cinema Combines Dinner and Movie, Opening August 5 in Yonkers 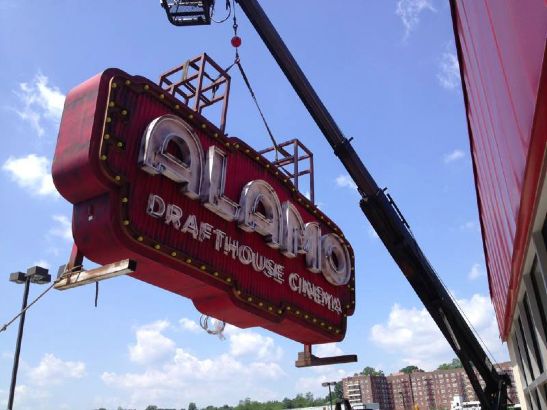 Have you ever met a real cinephile? We’re talking about the kind of movie buff who prepares vanilla milkshakes with a cherry on top to watch Pulp Fiction and casually drops quotes from Rushmore. The people behind Alamo Drafthouse Cinema, a popular movie theater restaurant based Austin, are real cinephiles.

On Monday, August 5 Alamo Drafthouse Cinema will open their first tri-state area location on Central Avenue in Yonkers. The concept combines dinner and a movie into one fell swoop, without sacrificing quality.

The theater’s menu is gastropub style— highlighting seasonal items and local craft beers— and film selections represent the best of what the industry has to offer, both past and present. Opening weekend movies include Fantastic Mr. Fox, The Way Way Back, The Shining, Two Guns and a digitally restored edition of Singin’ In The Rain.

“You pick your seats when you buy the tickets online, just like going to Madison Square Garden,” says General Manager Doug Bowmen.

Guests arrive 30 minutes before the show to place dinner orders and take their seats at long tables facing a movie screen. If you’ like to order anything else once the film starts rolling, simply write down your order on a provided card, slip it in a slot at the end of the table and a server will quietly bring it in. 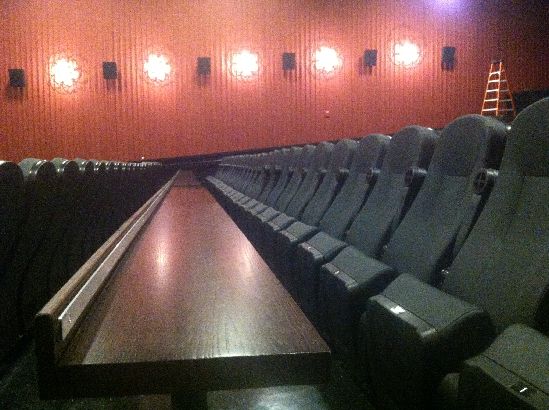 The menu is surprisingly artisanal— a far cry from the typical stale popcorn and processed cheese nachos. Specials include pizza verde, made with spinach, kale, mozzarella, asiago, basil pesto and arugula, as well as fried dill pickles with buttermilk ranch, a mushroom and white cheddar burger and salted caramel milkshakes. There is a nice selection of wine, and Alamo has partnered with Yonkers Brewing Company and other craft beer makers in the area to fill their 32 taps.

Following the grand opening, expect a lot of events aimed at cinephiles of all ages, including “quote-alongs” for flicks like The Big Lebowski and Shaun of the Dead, a “girlie night” airing of Notting Hill and even a Willy Wonka and the Chocolate Factory show with a visit from one of the film’s actors, Paris Themmen, who played the boy transmit into Wonkavision.

And yes, there will be themed menu shows. Fans of Lord of the Rings will appreciate Alamo’s menu for The Hobbit premiere in Austin, which featured a platter of cured meats and cheeses; a salad of wild greens, crisp parsnip, quail eggs and brown butter vinaigrette; seared trout with pea puree, oyster mushroom and smoked potato; and for dessert, honey cake with blackberry cream and walnut butter. Each item also came with a drink pairing.

Most movie buffs will be able to spot the potential obstacle in combining a theater with a restaurant. Don’t worry, Alamo’s strict “no talking” policy has been successfully enforced in their other locations.

“You get one warning, but after that you’re kicked out,” says Bowmen.

Film stars like Matthew McConaughey and Ethan Hawke have even starred in some of Alamo’s entertaining PSA-style clips asking guests to keep it down. The short videos are played before movies in the theater and are also on their YouTube page (look below for one starring Ethan Hawke and Julie Delpy). 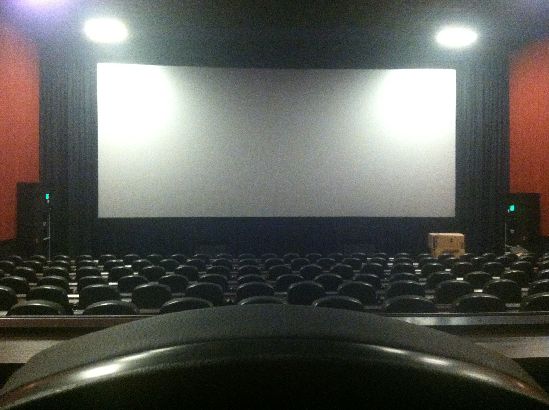