A coworker of mine once joked that you need to have someone in the office who can take you out for a burger and fries when you’re having a bad day- and then looked at me and said, “well, I guess we can find you some kale.”  But sometimes a vegan just wants a burger and fries, too.  It just has to be a vegan burger!   There are a couple of full service restaurants in Westchester that have vegan options for those- Haven in Pleasantville and Sweet Grass Grill in Tarrytown come to mind- but sometimes you don’t want the whole dining experience.

Sometimes you just want to order at a counter and take your food elsewhere.

Technically, at most “fast food” type restaurants one can find a plant-based option, but all to often, the only one is french fries and  a salad consisting of browning lettuce and mealy tomatoes.  (And sometimes you have to watch out for those fries- fries at at least one major fast food chain contain both beef and dairy.  Doesn’t that just gross you out, even if you’re not a plant-based eater?)

Poking around their website doesn’t reveal obvious vegan choices- veggie burgers often contain egg, tortillas can contain lard or dairy, rolls are often buttered when they’re grilled- but the menu looked like it had some vegan potential.  So, I emailed them.  The response I got?

“The black bean chili, the veggie burger, and the black bean wrap (without the cheese), plain salad, guacamole, fries, and sweet potato fries are all vegan.”

When I went into the restaurant, I did ask about the “express sauce,” which is by default on all of the burgers and wraps.  It was explained to me to be like “tartar sauce” and sure looks like it contains mayonnaise (not usually vegan, as it’s typically made with eggs), so I’ve been asking for that to be held.  Of note, the first two times I went in my food was made with the sauce, though I requested it held; the first time I didn’t discover that until after I had left with my food and didn’t have time to go back to fix it, and the second time, I checked my food before I left and it had to be re-made, but I’ve been in several times now without a problem.

The food is not gourmet by any means- it’s healthier versions of fast food.  I decided I didn’t really care for the burger- just not my cup of tea, so to speak, but I love that they have one.  And really, I think I’d rather have a black bean wrap, anyway.  You can still get the fries on the side, which by the way,  are excellent: crisp and salty, just how I like ’em!

Of course, fries that are fried are never going to be health food.  However, they are tasty.

It’s a cute little restaurant, very family friendly.  It’s pretty crowded at lunchtime, more manageable at dinner.  It does take maybe 5-10 or so minutes to get your order- so it’s not exactly “fast” food, but it’s worth the wait.  They also have a super-cool soda machine (Coke products, though the website says Pepsi) for those of us that drink soda, and more natural beverages for people who want a few less chemicals. 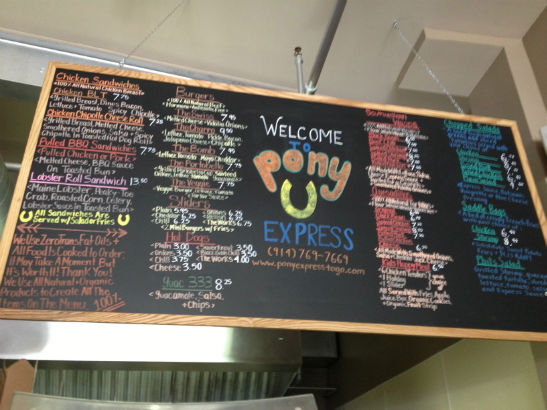 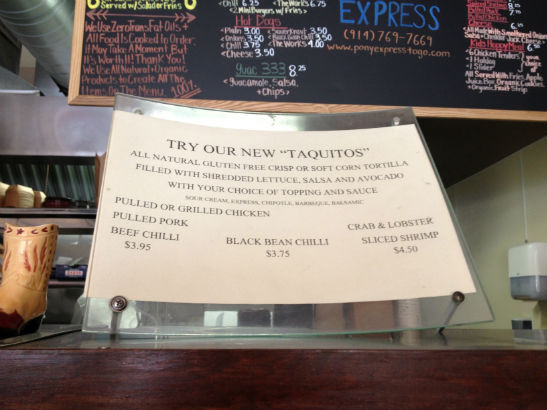 It looks like they have periodic specials that might also be vegan! (Black Bean Chili option, of course) 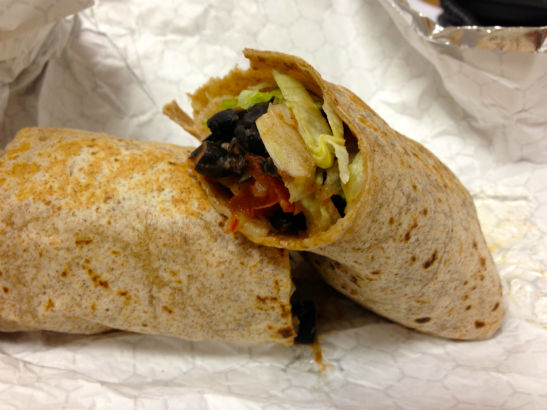 This is a solid black bean wrap.  No muss, no fuss!  Tasty and filling. 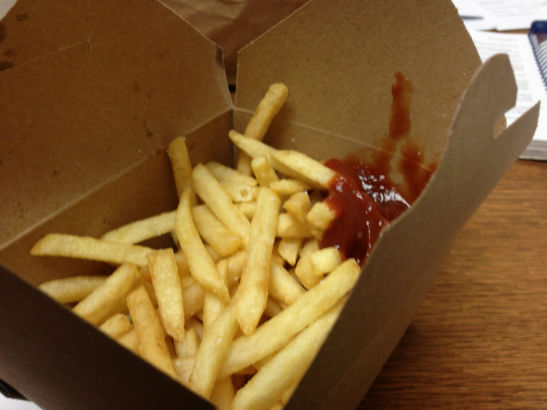 I know that I can’t keep ordering fries every time, but they are really good. 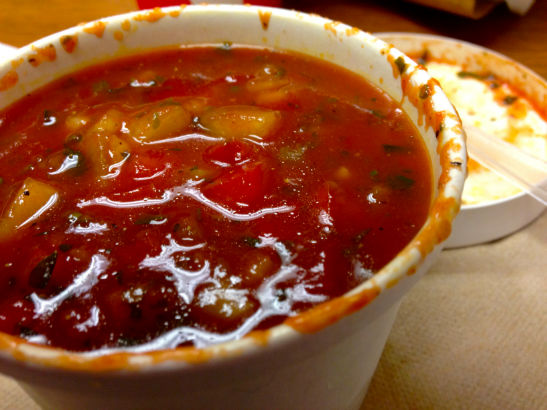 Gazpacho is a much healthier option!  This was a special a few weeks ago.

This is not the place to go if you want linen napkins and table service- but if you’re looking for fast food with a healthier twist, this a great place to try.  And if you’re having one of those days- well, there is a vegan burger and fries waiting here for you.

Pony Express is by the Pleasantville train station– so why not stop when you’re done at the Farmer’s Market?