The Culinary Institute of America is looking for a few good culinarians who are up to the challenge of taking their cooking skills to the next level.  So,  when the opportunity arose for me to enlist in their week long Culinary Boot Camp program, my answer was a resounding “YES CHEF!”

This week, I will be attending a Mediterranean Boot Camp which is part of the CIA’s Food Enthusiast Program (a wide variety of classes that run the gamut of five day boot camps to weekend hands-on and demonstration cooking classes).  The classes are held in their commercial teaching kitchens and are led by the same chef instructors that are currently turning out the next wave of American chefs. 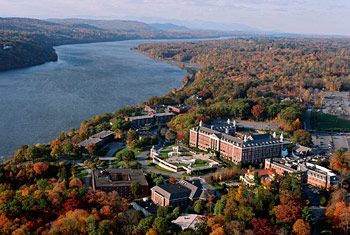 There’s something about being on the CIA’s picturesque campus in Hyde Park that can quicken any foodie’s heart.  For me, it’s definitely the hustle and bustle of the knife pack wielding students and the realization that some of the chefs who I regularly follow and admire have graced this campus (like Chicago’s Grant Achatz, NYC’s Top Chef season one winner Harold Dieterle, and Westchester’s very own  Eric Gabrynowicz and David DiBari).

I’m so excited to experience a little of the life of a CIA student (I even get my very own CIA issued chef whites!).  I hope you will follow me this week as I attempt to cook my way through southern Italy and France, Greece, Turkey, Morocco, and Tunisia with chef instructor Mark Ainsworth.  Let the culinary games begin!