A busy Day 2 was ahead of us, starting out with a tour of the The Culinary Institute of America campus.  A bit of  history, the CIA was founded in 1946 by Frances Roth and Katharine Angell in New Haven, CT.  These women wanted to start a culinary revolution by offering WWII veterans a trade.  Who would have thought their simple idea would flourish into this premier culinary college in Hyde Park (with three other branches in California, San Antonio, and Singapore)?  The main campus in Hyde Park houses over 2,900 students, 48 teaching kitchens, and 140+ chef instructors.  Since it was originally a 1900s Jesuit seminary, the remnants of the past, like the main student dining room housed in the stained glass chapel or the church pews lining the corridors of Roth Hall, are merged seamlessly within the modern campus. 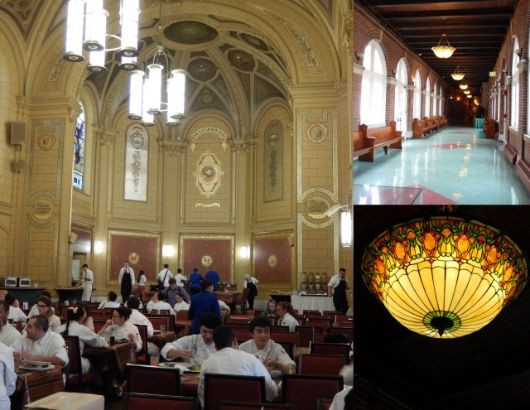 Today was not all work for our group.  We were treated to a special lunch at Caterina de’ Medici, the Mediterranean inspired student-staffed restaurant.  Between the architecture of the building, the wrought iron, and the lush herb garden, I immediately felt like I was stepping into a Tuscan villa. 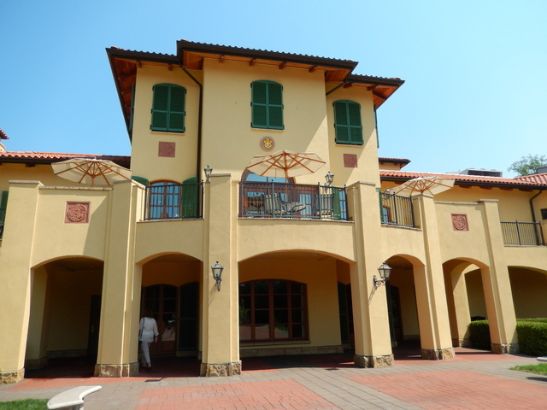 Our group was joined by chef Ainsworth and Lorrie Gierloff, Consulting Services Manager, who makes organizing these boot camp classes look like, well, a piece of cake. 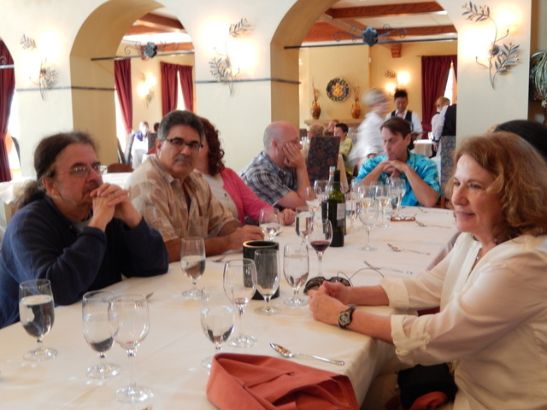 We celebrated our Day 2 focus on Southern Italy by enjoying a variety of regional dishes from apps to dessert. 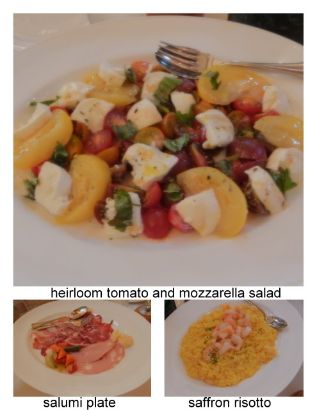 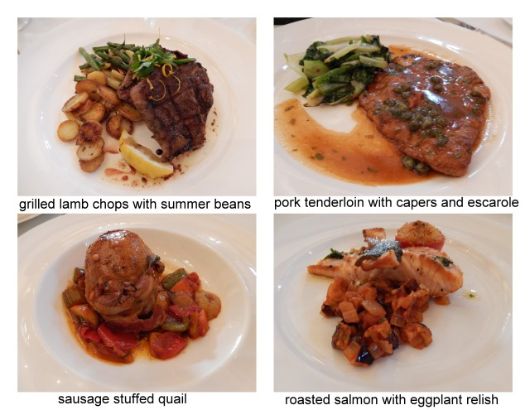 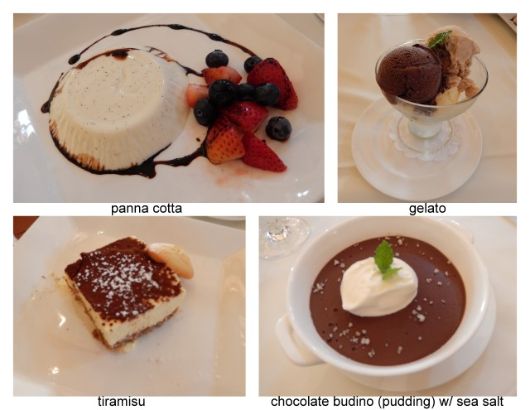 Most of us would have been happy taking a nap after that superb lunch, but it was back to work to learn all about the foods and flavors of Southern Italy.  We changed into our cheffy clothes, complete with the required neckerchief which I seriously think needs at least four pairs of hands to tie correctly. 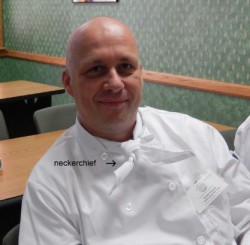 Down to business, we learn all about the areas of Southern Italy  —  Sicily, Puglia, Calabria, Campania, and Basilicata.  First lesson of the day is the flavor profile of the region, which includes garlic, tomatoes, capers, anchovies, and fennel.  We will be introduced to the sweet/sour taste of an agrodolce sauce in the mix of raisins and capers in the sauce that will top our swordfish recipe.  We learned that when tackling the pizza dough that a hydrated (moist) dough is a happy dough that will yield large airy holes in the middle and a thin crispy crust on the outside.

Enough talk, it was time to get back into the kitchen to start cooking.  My team tackled a braised pork shoulder, a putanesca sauce to go over fresh made pasta, and broccoli rabe with pancetta. Making the pasta was a revelation from start to finish even for a self-proclaimed Harvest on Hudson pasta making queen like myself (I just spent the last six months refining the task and probably made enough pasta to fill my basement  —  that is NOT an exaggeration!).  Chef Ainsworth gave us an easy ratio to remember :  one pound of flour (using a lighter “00” if rolling out by hand or a heavier durum when using a pasta roller) to approximately eight ounces of liquid (which could be the eggs by themselves or in combo with water, tomato paste, pureed spinach, etc.).  Wet ingredients are added to dry by whirling it around in a food processor until the dough “feels” right (not too dry not too wet).  Wrapped in plastic and left to rest for about 30 minutes, the dough is ready to rock and roll.  Chef Ainsworth’s technique of creating a rolled dough loop was just short of genius (and would have made my life a little easier had I mastered it a few months ago  —  timing is everything).

The end result was Gretchen’s perfectly cut ribbons of tender fettuccine that became the dining partner to my putanesca sauce. 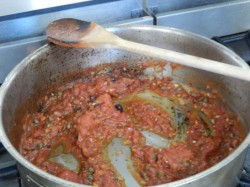 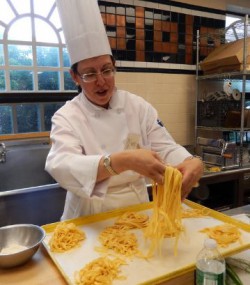 There was a lot of activity with the other teams around the kitchen like Julia heading up the making of the mozzarella demo, which when completed would be rolled up with prosciutto and sun-dried tomatoes. 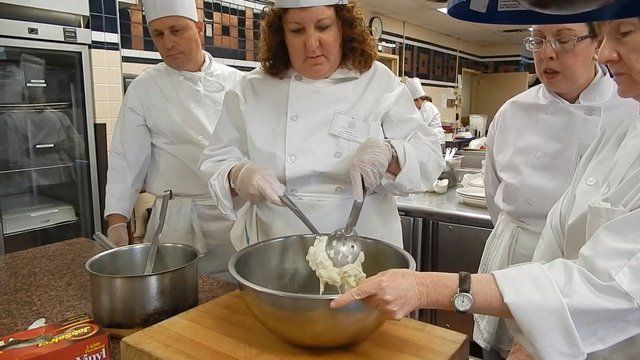 Eileen sauteed the the swordfish that came out so moist 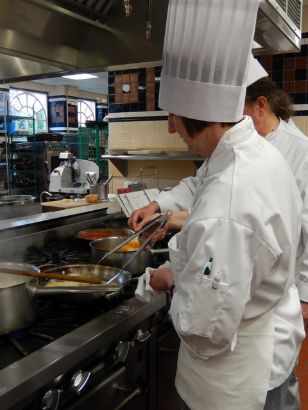 and that’s me heating up some milk 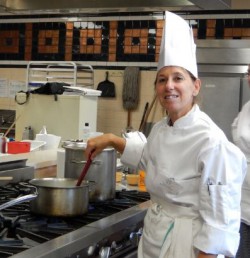 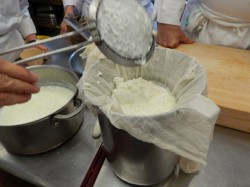 that we magically turned into fresh ricotta cheese by adding in buttermilk to create the curds.

And here are the some of the final results of all of our efforts. 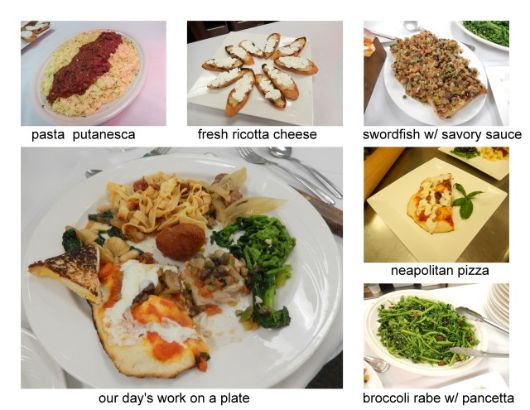 Come back tomorrow when our culinary journey takes us to Turkey and Greece!