We are at the halfway point of our week long Mediterranean boot camp class at The Culinary Institute of America, and the fact that food brings people together is immediately apparent in our group of ten.  Starting out as strangers only days ago, we have become fast friends and cooking partners.  The camaraderie stems from the fact that we all seem to be cut from the same (cheese)cloth.  Like the term or not, we are foodies (\fü-deez\).  Defined by Merriam-Webster as “a person having an avid interest in the latest food fads”, I actually prefer the Urban Dictionary rendition:

“A person that spends a keen amount of attention and energy on knowing the ingredients of food, the proper preparation of food, and finds great enjoyment in top-notch ingredients and exemplary preparation.”

Well, if someone wanted to research foodies in their natural habitat, the CIA should be first on their list; and looking in on our group, this might well be what they would observe: 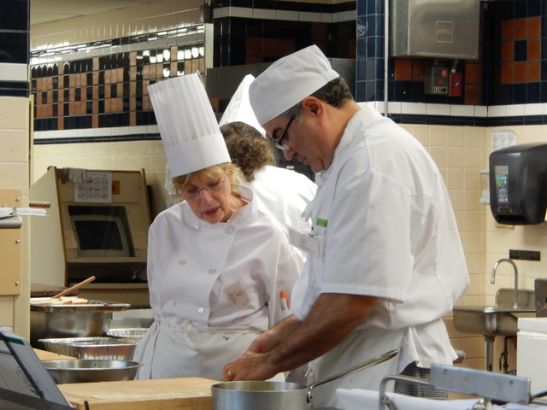 Sharon and David working together on the spanikopita

At a time when I thought I might actually have to seek help for my addiction to food, I’ve found comfort with these people who get so much pleasure from preparing, experiencing, sharing, critiquing, and (of course) eating food.  Alida, who has wanted to do this class for ages, watched 30 hours of CIA culinary DVDs with her friends before she arrived.  When not in the kitchen, Ed spends his free time being a mystery diner evaluating chain restaurants for their corporate offices making sure everything is up to par.  Sharon shared with me that she feels validated being with a group that loves the whole food experience.  We are foodies and proud of it!

It was very apropos that chef Ainsworth started our class with a discussion of methods of food presentation; the science, so to speak, of building the components on the plate.  The simpler the plate the better (mostly plain white round), and the main ingredient (think glistening grill-marked steak) should be front and center for the oohhh and ahhhh effect with supporting sides underneath, lifting it up to create height.  Daniel Humm, of Eleven Madison Park and NoMad and recipient of this year’s CIA Augie Award, says it simply, “Make it nice.”

We then moved on to our day discussing the flavor profiles of Turkey and Greece.  Greek cooking is rich with lamb, fish, olive oil, lemon, garlic, eggplant, grape leaves, cucumber, yogurt, rice, feta cheese, tomatoes and herbs and spices like oregano, dill, thyme, cinnamon, and nutmeg.  Turkish cuisine shares some of the same flavors but adds goat and chicken along with seasonings like sumac, paprika, cumin, and parsley.

We are all anxious to get into the kitchen and begin cooking.  My team starts on the moussaka (lamb and eggplant casserole) which had lots of steps, but the end result was so worth the effort. 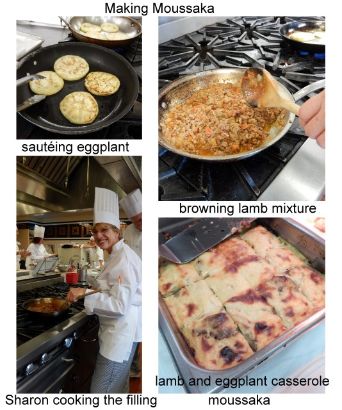 On the other side of the kitchen, David meticulously folded the spinach and feta cheese filling into perfect phyllo triangles for spanikopita 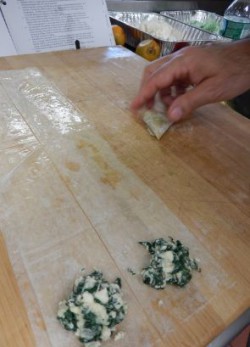 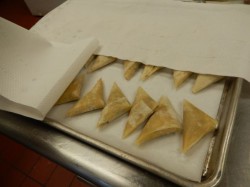 and baked them to a golden brown. 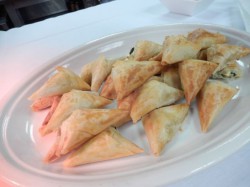 Julia patiently rolled the seasoned rice filling in grape leaves for the dolmathes, 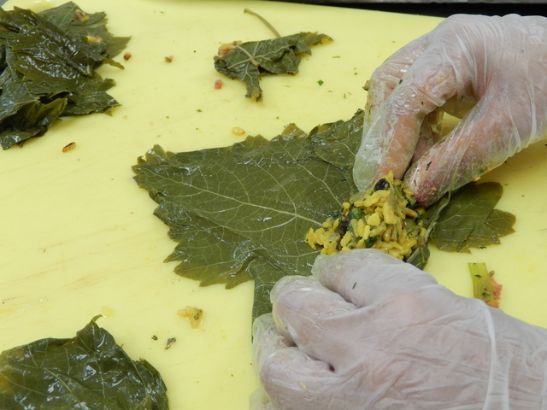 while Eileen was focused on making our fresh mini pitas. 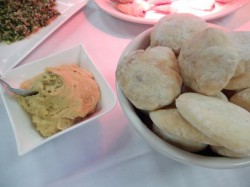 We are all certainly getting very comfortable and confident in the kitchen.  And as they say, where there’s smoke, there’s . . . 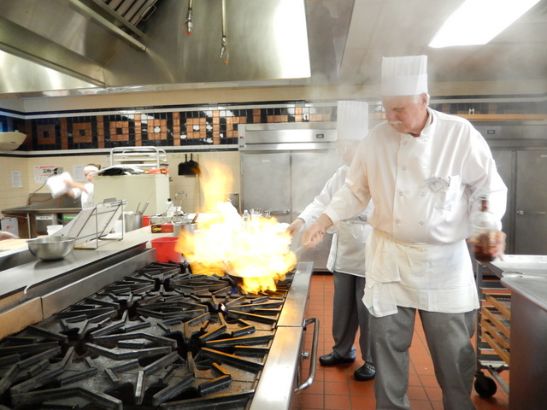 FIRE!   John was excited test out some kitchen pyrotechnics flambéing a brandy sauce.

Compared to those fireworks, my dish was quite calm.  Oooey, gooey baklava filled with mixture of walnuts, sugar, cinnamon, cardamom, and cloves between buttery layers of flaky phyllo, all but drowned in a sugary honey syrup.

Sitting down to our “family meal”, the group agreed that this dinner was our favorite so far.  In keeping with the traditional Greek and Turkish meze, “small plates”, the dishes we prepared were perfectly designed to be shared and together created a most delightful feast.

This my big fat Greek and Turkish dish. 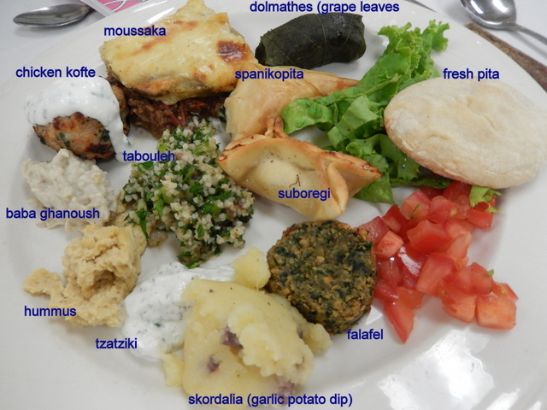