All decked out in our cheffy outfits, our boot camp group blended into the The Culinary Institute of America’s campus looking more like students and a lot less like visitors.  Today, we are learning about Spain, the last stop of our culinary whirlwind tour of the flavors of the Mediterranean.  We’ve all become so comfortable here at the CIA, making it very difficult to leave (especially the fully stocked, state of the art kitchens!).  Reflecting on all we learned this week, I couldn’t help but think about this quote by chef Fernand Point, a famous French restaurateur considered to be the father of modern French cuisine.

This was just one of the inspiring quotes prominently displayed around the perimeter of the CIA’s Conrad N. Hilton Library (one of the largest collections of culinary publications in the country, totaling 84,000 volumes and 4,200 videos).  Our chef instructor, Mark Ainsworth, brought out the student in all of us with his experienced, informative, and colorful teaching style.  Sometimes it’s the little things that you take away from a class that that make the most difference.  So, before I get into our region of the day, I wanted to share with you the highlights of the little tidbits that I learned throughout the week.  Did you know that . . .

&hearts;   You’ll never need a recipe for pie crust again if you can just remember 3-2-1.  A pie crust is a ratio (measured by weight) of 3 parts flour, 2 parts fat (butter) and 1 part water.  Going a step further, approximately one ounce of dough is needed for each inch of a pie shell (hence 8 ounces of dough will cover an 8 inch pie shell).

&hearts;  You can avoid having a pie shell shrink when blind baking (pre-baking before filling) by nesting an empty pie plate on top of the shell (so now the dough is sandwiched between the two) and then turn the “pie sandwich” upside down to bake.  Gravity will not allow the crust to recede.

&hearts;   Onions contain sugar, but garlic has proteins (which make it easy to burn).  To avoid going from lightly brown to bitter and burnt, start garlic out in cold oil.

&hearts;    There’s a reason to mix together some of the sugar with eggs when making a custard (creme anglaise) for an ice cream base.  The sugar raises the temperature at which the eggs would normally cook (a/k/a scramble) in the process of thickening the custard.  And take my word for it, a scrambled, broken custard is a sad situation indeed.

&hearts;   What grows together, goes together was probably one of the most important lessons I learned in this class.  Think end of summer produce right now, like red ripe tomatoes and lush basil drizzled with olive oil.

&hearts;   The creamiest hummus is achieved by putting the mixture through a sieve or food mill to remove skin of the chickpeas.

&hearts;   A quick way to get the “meat” out of a whole roasted eggplant is to wrap it in plastic immediately out of the oven and let it cool to room temperature.  Then, just cut off both ends and squeeze the insides out.  This was a trick that chef Ainsworth learned from a student!

With all these facts, and more, now in our cooking repertoire, our last adventure awaited us in what is known as the garden of Europe  —  Spain.  This region has many micro-climates in its mountains, valleys, and coast.  We were introduced to the flavors of almonds, garlic, olive oil, onions, paprika, red peppers, tomatoes, rice, and saffron.  It’s understandable how expensive saffron is when you realize that an ounce of this golden spice is equal to an acre of flowers!  We talked about how an almond and hazelnut rich Picada or Romesco sauce is thickened with nuts and bread.  And how many Spanish dishes are enhanced with a sofrito, which literally means stir-fry.  It is a sautéed mélange of onion, peppers, tomatoes and herbs which adds another level of flavor to many recipes. 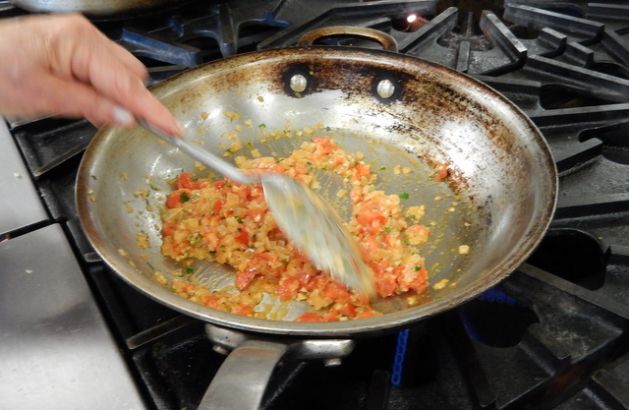 In the kitchen, our teams made a selection of tapas, which are best described as small bites or snacks traditionally served with a sherry or another type of aperitif.  It is not an exaggeration to say that there are hundreds of different morsels that are considered tapas  —  from refreshing ceviches to grilled brochettes. 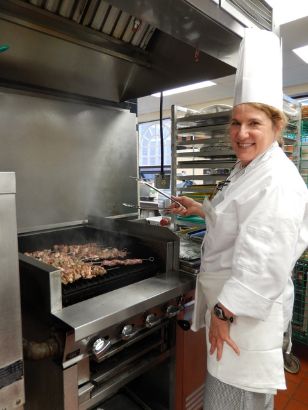 We also made three different types of paella, two with rice and one surprisingly enough with pasta.  Paella, originally a fisherman’s dish, is a one pot meal made with a short grain rice like Spanish Bomba or Calasparra in a special paella pan that has a shallow round bottom (but a regular saute pan would be a fine substitute). 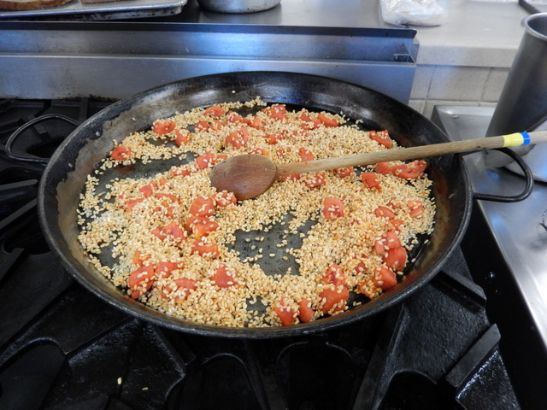 start of the paella

When cooking, the rice forms a crust on the bottom called socarrat, which the Spaniards will actually fight over.  To achieve this coveted crust, the rice should never be stirred after it has started cooking so as not to disturb the crust forming on the bottom. 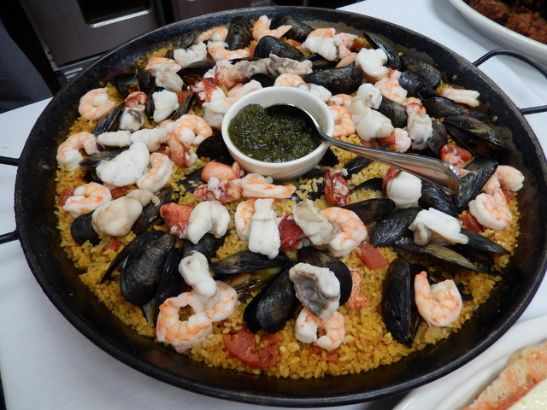 John’s paella with my picada sauce in the middle

This was most certainly a busy, but very successful, last day of cooking.  We were a lucky group to be guided through this boot camp by chef Mark Ainsworth, whose personal experience and knowledge was always in the forefront of each of our lessons.  Here’s a visual of some of our Spanish dishes: 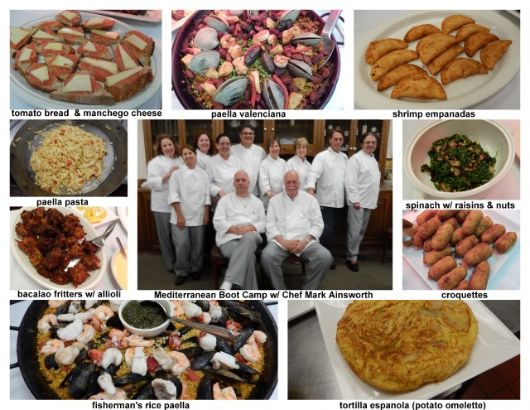 I know we all learned our lessons well this week in our boot camp class.  And with my new-found knowledge, I am anxious to get back to my own kitchen to experiment with the many diverse flavors of the beautiful Mediterranean.

The 411 on the CIA’s culinary classes: